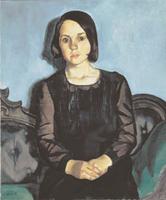 Edwin Holgate, painter, engraver (b at Allandale, Ont 19 Aug 1892; d at Montréal 21 May 1977). In 1895 the Holgate family moved to Jamaica where Edwin's father was an engineer. Around 1897 Edwin returned to Toronto to study and in 1901 the Holgates settled in Montréal. Edwin became a part-time student c 1905 at the Art Assn of Montreal under William BRYMNER and c 1910 took a summer course with Maurice CULLEN. In 1912, during a trip to Paris, he enrolled in the Grande Chaumière. He also travelled in Ukraine and Japan. He came home in 1915 and his first exhibition was at the Arts Club of Montreal in 1922. He taught engraving at Montréal's École des beaux-arts 1928-34, and about 1930 was invited to join the GROUP OF SEVEN. He was known primarily as a portraitist and painted an unusual series of female nudes in outdoor settings during the 1930s. In 1935 he was elected associate of the Royal Canadian Academy of Arts. The National Gallery of Canada held a retrospective of his work in 1975-76.