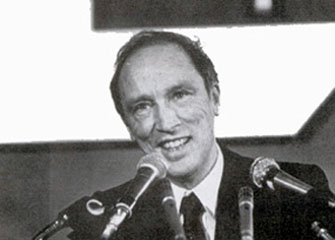 Neither the 1979 nor the 1980 elections were exactly voluntary. The Liberal government of Pierre Elliott Trudeau hung on, well into the fifth year of its mandate, hoping against hope that events would save it. The only effect was a string of by-election misfortunes that brought the government perilously close to losing its majority, further narrowing Trudeau’s options.

The election, called for 22 May 1979, pitted the veteran Trudeau against three neophyte opponents — Joe Clark of the Progressive Conservatives (PC), Ed Broadbent of the New Democratic Party (NDP) and Fabien Roy of the Créditistes. Liberals were uneasily aware that the government's record was at best incomplete; a more realistic assessment would have labelled it uninspired. Trudeau had a tendency to believe that the right process would produce the right results, and so one study followed another.

Meanwhile the separatists, the Parti Québécois under René Lévesque, had formed the government in Quebec, presenting Canada with an unprecedented challenge. Lévesque’s main plank was a promise to hold a referendum on “sovereignty-association,” which he defined as an independent Quebec in an economic association with Canada. Federalists knew that on such a proposition, bold and reassuring at the same time, Lévesque could win. Yet Lévesque put off the referendum, hoping for winning conditions. It would have to be held sometime in 1980, before the end of his provincial legislative mandate, and whoever won the federal election would have to deal with that fact (see also Quebec Referendum, 1980).

The Liberals entered the election with another handicap. Their party was weak in the West and had been for a generation. Trudeau had briefly tempted western voters, but through the 1970s his popularity had worn very thin. He was personally unpopular in Ontario as well, and in the Atlantic region the philosopher-prime minister seemed very remote from the daily concerns of the voters. It is usually true that oppositions do not win elections, but governments lose them, and if so, Trudeau and the Liberals had created winning conditions for the opposition.

The leader of the Official Opposition was the youngest man ever to hold the job. At 39, Joe Clark had to cope with the general impression that he was too young and inexperienced for the job. “It’s the year of the child,” snorted the former Conservative prime minister, John Diefenbaker — and Diefenbaker spoke for many. Confronting Trudeau in the ritualized leaders’ debate on television, Clark seemed out of his depth. On the other hand, Clark’s weakness and relative innocence allowed Trudeau to put his characteristic arrogance on display, thus reminding many Canadians why they no longer wanted him as prime minister. The third man in the debate, NDP leader Ed Broadbent, probably benefited most from the verbal combat, comparing favourably to Clark in his polish and to Trudeau in humility.

The outcome was probably as good as the Liberals had any right to expect. The results in the West were bleak — one Liberal MP from British Columbia, a star candidate, Art Phillips, the former mayor of Vancouver; two Liberals elected in Manitoba, and one in the Northwest Territories. In Ontario, the Tories surged past the Liberals, 57 seats to 32, and did well in Nova Scotia and Prince Edward Island. Only in Quebec did the Liberal vote hold firm, 67 seats to the Conservatives’ two, with six going to the Créditiste remnant.

Overall, the Conservatives won 136 seats, and the Liberals only 114. The NDP improved its position to 26 seats. On the other hand, the Liberals were considerably ahead in the popular vote nationally. But the seat total was what counted (see Electoral Systems), and Trudeau promptly resigned. Clark had won, coming close to a majority in Parliament, but his government would have to depend on Créditiste support. Even with that support, the margin for error in the House of Commons was not great. Clark no doubt thought time was on his side. Like Diefenbaker in 1957, he would meet Parliament, prove that he could govern well and firmly, and then call another election in the expectation of winning a majority. It was a plausible strategy, but it had the downside of keeping the political pot boiling; in effect, the election never ended. Clark put together a good Cabinet; at least he had two members in Quebec to appoint as ministers, masking his party’s weakness in that province.

Clark misfired right from the beginning. He had promised during the election to move the Canadian embassy in Israel from Tel Aviv to Jerusalem. Against the strong advice of his civil servants, he announced that he would keep the promise. Arab governments reacted with rage, and it became clear that some Canadian business interests in Arab countries might suffer the consequences. The best Clark could do was appoint a special investigator, the former Conservative leader Robert Stanfield, to get “the facts” (which were already well known) and use Stanfield’s report as an excuse to climb down.

Worse, in 1979 oil markets were disrupted by the Iranian revolution. Prices spiked, with predictable results for Canadian petroleum consumers. Canadians were under the illusion that their government could “do something” about the prices, and the usual fantasies of multinational conspiracies chased each other across public opinion — which, because of the political situation, was also electoral opinion. Clark’s finance minister, the very able John Crosbie, decided that it was time for a dose of reality, which he delivered in his budget — the first Conservative budget in 17 years — in December 1979. Crosbie proposed an excise tax of 18 cents-a-gallon on gasoline, to reduce Canada’s chronically high deficit. Fiscally, it made sense; politically during an election period, it did not.

However, it seemed safe enough to do so, for the Liberals were officially headless. Trudeau had resigned as party leader and announced his intention to retire to private life. Believing the Liberals impotent and expecting they would not dare to defeat the budget, the Conservatives jeered at their opponents across the floor of the House of Commons. It was not, perhaps, their most sensible tactic, but arrogance was now compounded by folly. Despite his narrow unofficial majority (with Créditiste support), Clark allowed some of his members to depart on official business. The Minister of External Affairs, Flora MacDonald, left to attend a NATO meeting in Brussels.

The Liberals did their sums and found the government’s majority wanting. They also noticed that the Conservatives were behind in the polls. They defeated the government on the budget, leaving Clark no alternative but to dissolve Parliament a few weeks before Christmas, with an election scheduled for 18 February 1980.

The Liberals did have a problem. No Canadian party had ever contested an election without a leader. A leader must be provided, and with little alternative the party’s notables begged Trudeau to resume the mantle he had just shrugged off. Trudeau obliged.

The times were out of joint. The Quebec referendum was looming, and if Joe Clark represented the face of Canada to Quebec, Canada just might lose. Trudeau’s brief departure from the leadership reminded Liberals of the necessity for party unity, and there was little grumbling from party members. 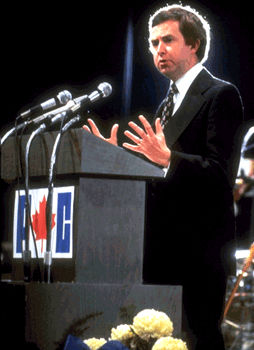 Joe Clark at the PC Convention at which he won his party's leadership (photo by John de Visser).

The result was almost a foregone conclusion. The Liberals rose four per cent in the popular vote, and the Conservatives sank three per cent. The NDP gained not quite two per cent, and the Créditistes disappeared. As a consequence, Trudeau won 74 out of 75 seats from Quebec in the House of Commons, and did well in Ontario and the Atlantic provinces, where voters resented Crosbie’s gas tax. But the Liberals won only two seats in the West, both in Manitoba. Overall, the Liberals scraped together a narrow majority in the House of Commons. Trudeau got what most politicians can only dream of — a second chance. If he had wasted his first 11 years in power, 1968–79, on contemplation and study, this time he would act. In the elections of both 1979 and 1980, Trudeau was the definite winner. 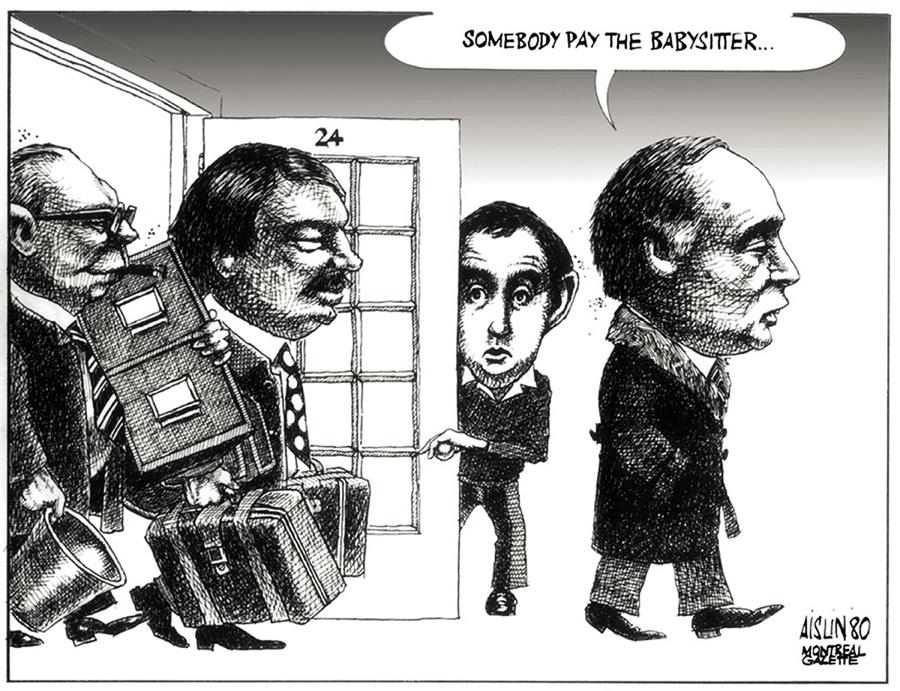 Joe Clark and René Lévesque were the losers. Clark lost his chance to show what a PC party could do in power — a party that under his leadership was close to the political centre and not addicted to the nostrums of lower taxes and lesser government. Lévesque lost his chance to debate the future of Canada against a leader whose standing in Quebec was at best low. Instead, he would face his province’s most formidable politician, Trudeau. It was a battle he was bound to lose.