The earliest forerunners of ethnomusicologists in Canada were explorers, travellers and missionaries who described the music and dance practices of First Peoples. Marc Lescarbot's Histoire de la Nouvelle France (1606) and Father Gabriel Sagard-Thodat's Histoire du Canada (1636) include the earliest transcriptions of songs. The Jesuit Relations (1632 ) described traditional ceremonies or social gatherings as well as First Nations participation in both Christian and secular European music making. Among the earliest cylinder recordings were those made by James Teit of Salishan, Thompson River singers (1897) and Alexander Cringan of southern Ontario Haudenosaunee (1897-1902). Late 19th-century studies of Native Canadian music by both musicologists such as Carl Stumpf and anthropologists such as Franz Boas have been regarded as landmarks in the development of these academic disciplines. Early studies embodied a split between the description of sound and the description of the uses of sound. Until the late 20th century, cultures were usually regarded as self-contained and different from one another. Borrowed and adapted musics, for instance, Native hymnody, fiddling, band music, or popular music in indigenous languages, were given more serious attention by the 1970s.

By the late 19th century and coincident with the building of the Canadian nation, folklorists and folk-music collectors were active in both francophone and anglophone immigrant communities. For French Canada, Ernest Gagnon's Chansons Populaires du Canada (1st edition, 1865) transcribed a core repertoire with some indications of performance practice in the first edition, still definitive when Marius Barbeau began several decades of collecting in Québec in 1913. Among other widely published folk music collectors of Anglo-Celtic and francophone traditions in the 20th century are Helen Creighton, McEdward Leach, Maud Karpeles, Edward Ives and Kenneth Peacock in Atlantic Canada; Anselme Chiasson, Charlotte Cormier, Ronald Labelle, George Arsenault and Donald Deschenes in Acadian contexts; Barbeau and subsequently Carmen Roi, Luc Lacourciere and Roger Matton in Québec; Edith Fowke and Germaine Lemieux in Ontario; Barbara Cass-Beggs, and Philip Thomas in Western Canada. Field recordings by many of these collectors are still available in the catalogue of Smithsonian Folkways records.

Institutions as contrasted in purpose as the Canadian Pacific Railway and the National Museums of Canada fostered attention in the early 20th century to the literature, music and dance of diverse ethnocultures within the nation. As early as 1927, the CPR's publicity director John Murray Gibbon, along with folklorist Barbeau and composer Ernest Macmillan, organized a series of landmark multicultural festivals in Québec City and subsequently various Western cities. The study of traditional music cultures was also fostered by the Canadian Museum of Civilization both through the Anthropology Division created in 1910 by linguist Edward Sapir, and more recently through the Canadian Ethnology Service / Service canadien d'ethnologie and Canadian Centre for Folk Culture Studies / Centre canadien d'étudies sur la culture traditionnelle. Particularly since the 1960s, the Canadian Museum of Civlization has played an active role in commissioning research on the music cultures of culturally specific communities, among them Métis, Ukrainian, Doukhobhor, and Chinese as well as Inuit, Kainai and many others.

The work that ethnomusicologists do is extremely varied in its aims and styles. Historical factors have often shaped the objectives and methods. Many early collectors were less concerned with the social worlds of the singers who collaborated with them than with the styles and structures of the songs themselves. They mapped tune variants, attempted historical reconstructions of texts, and in some cases developed classification systems for song types. By the late 20th century, the perspectives and discourses of musicians and other culture bearers have generally been valued more and studies are written by both insiders and outsiders to many traditions. Studies of individual tradition bearers have considered world views and learning processes, acknowledging folk artists as important spokespersons about the meaning of expressive culture in their communities, and challenging earlier misperceptions that held that oral traditions were usually anonymous. Historical studies have appeared, especially in relation to ethnocultural groups such as Ukrainians or Doukhobours who have a century or more of residence in Canada. Studies of specific communities and places have emerged together with other studies of music "scenes" that cut across local communities. Ethnomusicologists have explored questions of process: ways in which individuals learn music in different cultural communities, the means by which music is transmitted via both social and media networks, the significance of music revivals, or the impact of new contexts on the style and meaning of music. Questions of identity have also been a central concern: how is music used to represent the ethnoculture, age or gender of a social group, and how does performance become a place where identity is negotiated. The complexity of hybrid urban music cultures has been studied particularly in Toronto and Montréal where such topics as Caribana or Chinese festivals have attracted scholarly attention. By the 1980s, scholars began to consider the impact of international market strategies, especially the industry niche generally labelled "world music", the effect that competition has had on musical traditions, the changes that new technologies have made on the creation and reception of music, and the continuities between traditional music and popular culture. In Canada, as elsewhere, a growing number of professional ethnomusicologists are also engaged in public-sector work, for example, as advisors on cultural policy or curriculum development, and in the film and recording industries. 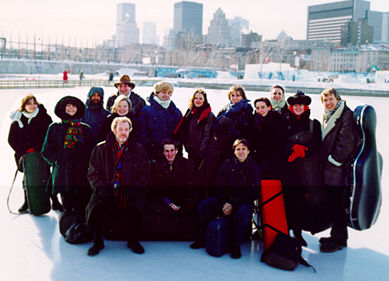