The term Family Compact is an epithet, or insulting nickname; it is used to describe the network of men who dominated the legislative, bureaucratic, business, religious and judicial centres of power in Upper Canada (present-day Ontario) from the early- to mid-1800s. Members of the Family Compact held largely conservative and loyalist views. They were against democratic reform and responsible government. By the mid-19th century, immigration, the union of Upper and Lower Canada, and the work of various democratic reformers had diminished the group’s power. The equivalent to the Family Compact in Lower Canada was the Château Clique.

The term Family Compact is an epithet, or insulting nickname; it is used to describe the network of men who dominated the legislative, bureaucratic, business, religious and judicial centres of power in Upper Canada (present-day Ontario) from the early- to mid-1800s. Members of the Family Compact held largely conservative and loyalist views. They were against democratic reform and responsible government. By the mid-19th century, immigration, the union of Upper and Lower Canada, and the work of various democratic reformers had diminished the group’s power. The equivalent to the Family Compact in Lower Canada was the Château Clique.

Strachan sought special status for the Church of England and became the centre of controversy as he defended Anglican monopoly of the Clergy Reserves and dominance in politics and education.

Origins of the Family Compact

The Family Compact’s roots are in a series of political appointments made to two unelected branches of government in Upper Canada during John Graves Simcoe’s tenure as Lieutenant-Governor in the 1790s. Such wealthy and powerful men as James Baby,  Richard Cartwright and William Osgoode were appointed during this time. Simcoe wanted to recreate British society in Canada. He believed that an aristocratic governing class was essential to that goal. By limiting leadership positions in the colony to people with connections, it was hoped that a hierarchical class structure would arise. The unelected branches of government were answerable only to the lieutenant-governor; this made the elected Legislative Assembly powerless.

The term Family Compact was first used and described in a letter written by American-born reformer Marshall Spring Bidwell to  William Warren Baldwin on 8 September 1828. Bidwell wrote, “I shall be happy to consult with yourself and Mr. Rolph on the measures to be adopted to relieve the province from the evils which a family compact have brought upon it… The whole system and spirit of the present administration need to be done away with.”

The term was popularized in 1833. Journalist and reform politician William Lyon Mackenzie published a list of Family Compact names in his newspaper, the Colonial Advocate. Family Compact was meant to describe the close relations between members. This included marriage and business ties, as well as their preferential treatment of each other.

About half the members of the Family Compact were second-generation Loyalists. Loyalists were American colonists who supported the British during the American Revolutionary War (1775–83). Tens of thousands migrated to British North America during and after the war. They carried with them an innate distrust of democracy. Above family and business ties, the Family Compact was united by its shared commitment to loyalism. Loyalism was a highly conservative ideology. It was rooted in preserving British norms and rejecting democratic influences.

For Loyalists, the American Revolution confirmed their belief that democracy was a dangerous form of mob rule. The war strengthened their faith in the supremacy of the British Crown and constitution. The American invasion of Upper Canada during the War of 1812 further fed their hostility towards democratic reform and responsible government. In response, the  government of Upper Canada tried to make it impossible for American settlers to receive land grants in the 1820s. The Family Compact’s devotion to loyalism set the political tone in much of the colony. 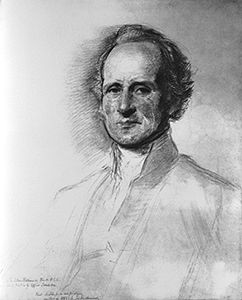 As a member of the Family Compact, Robinson was a defender of the imperial connection and a social hierarchy headed by a chosen elite. Drawing by George Berthon.

Members of the Family Compact often held several social, political and economic offices at the same time. Access to these positions was typically (though not exclusively) restricted to allies and close associates. The Legislative and Executive Councils controlled appointments to government positions. They also controlled land grants, which they gave out along partisan lines. The Church of England, the Bank of Upper Canada, the  Canada Company and the Law Society of Upper Canada formed the basis of Family Compact power. Influence over these institutions ensured that the Family Compact held financial, spiritual, legal and administrative authority over the colony.

In spite of its substantial powers, the Family Compact did not have free rein. Any decision could be undone by the lieutenant-governor or by the Colonial Office in England. Members generally had close relationships with the sitting lieutenant-governors. The LGs shared the group’s interest in keeping a connection to Great Britain and bolstering traditional institutions. The Family Compact used that close relationship to influence colonial rule while keeping an image of absolute loyalty.

Many members of the Family Compact showed a willingness to break the law when they believed the survival of the colony was at stake. Violence was commonly deployed against political opponents at electoral polls, political meetings and marches. The Family Compact dominated the magistracy and judiciary. This allowed for violence in defense of Family Compact interests to go unpunished. Perhaps the best known example of this kind of violence was the Types Riot in 1826. Several young law students and associates of the Family Compact broke into and sacked William Lyon Mackenzie’s Colonial Advocate offices. None of the rioters faced criminal charges, despite being identified by onlookers.

Mackenzie led the Rebellion of December 1837 in Upper Canada.

The Family Compact was united by common interests and goals. But it was not the cohesive, reactionary body that its nickname implies. Members often came into conflict with each other over personal and political issues. Individuals such as William Warren Baldwin, who had close ties to the Family Compact, went on to become leading democratic reformers. (See Reform Movement in Upper Canada). Some conservative Upper Canadians who were otherwise supportive of the Family Compact were critical at times of the privilege and conduct of bodies such as the Canada Company.

The reform movement that arose in opposition to the Family Compact in the 1820s and 1830s was never as united or as cohesive as its opponent. Reformers disagreed over what was in need of reform and how reform could be achieved. One of the more extreme and well-known figures was William Lyon Mackenzie. He grew increasingly radical as his attempts at reform were obstructed. The atmosphere of conservative violence and the lack of parliamentary democracy convinced Mackenzie that only rebellion could achieve real change in the colony. In December 1837, he led a small uprising that was quickly put down by loyalist militia forces. (See also: Montgomery’s Tavern; Rebellion in Upper Canada; Rebellions of 1837–38.)

A pen and ink drawing by Charles William Jefferys, showing the skirmish outside John Montgomery's tavern in Toronto on December 4, 1837, during the Rebellion in Upper Canada.

Decline of the Family Compact

After the rebellion In Upper Canada was defeated, the British prime minister sent Lord Durham to determine its causes. In 1839, he issued his Report on the Affairs of British North America (the Durham Report). The report condemned the Family Compact and led to the union of Upper and Lower Canada. (See Act of Union.) The Family Compact had fewer seats in government in the unified Province of Canada; it was therefore less powerful.

By the 1840s, political reform and increased immigration from the British Isles had diluted the Family Compact’s influence. Immigrant-based organizations such as the  Orange Order challenged the Family Compact’s monopolistic claim on loyalism. Industrialism and commercialism created a new bourgeois class; its influence prevented the adoption of British class structures. (See also Industrialization in Canada.) Savvy members of the Family Compact adapted to the changing times and kept their prominent places in society. Less dynamic members saw their power slowly fade. At the time of Confederation, many of Canada’s leading figures had ties to the Family Compact. But the group no longer occupied the dominant position it once held. 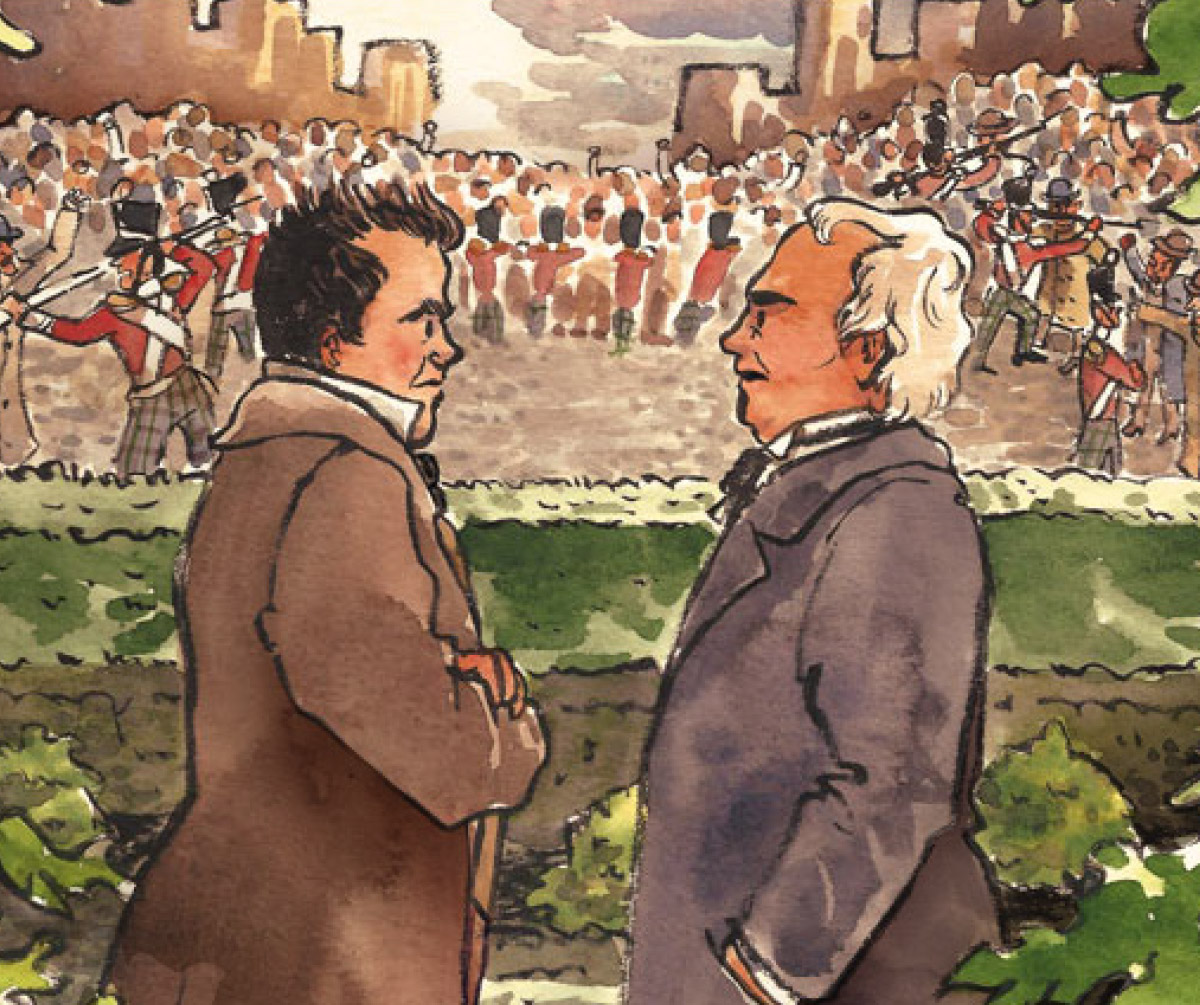