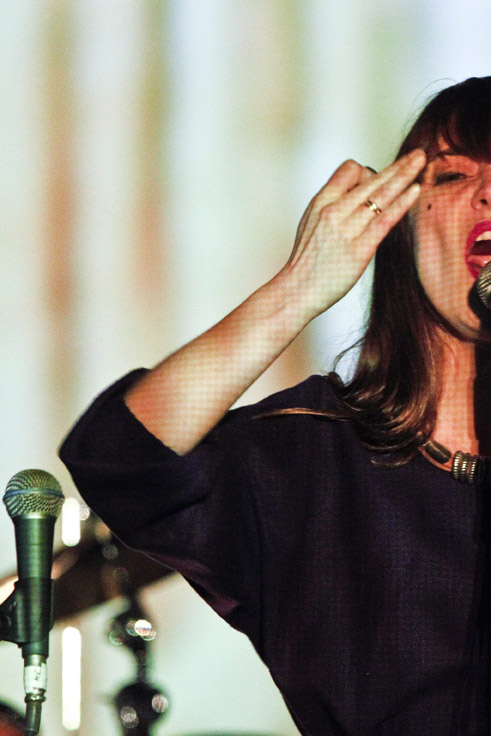 Leslie Feist. Singer, songwriter, musician, b Amherst, NS, 13 Feb 1976. Leslie Feist is the daughter of abstract painter Harold Feist and mother Lyn. The pair met while Harold was teaching at the Alberta College of Art, but later moved to the Maritimes after he accepted a teaching position at Mount Allison University. Her parents divorced when she was young and she moved with her mother and older brother out west, eventually settling in Calgary.

Feist spent her teen years in Calgary, where she sang in local choirs and eventually formed a punk band called Placebo at the age of 15. As the lead vocalist, Feist devoted herself entirely to the band and even put off university when Placebo gained local recognition and was awarded first place in a battle of the bands at her high school. Their prize was a main stage gig at a festival in Calgary. Feist claims to have schooled herself in the ways of the music industry by touring with Placebo as they booked their own shows and made very little money for their efforts. She toured with the band until the age of 20, when she lost her voice. Feist moved to Toronto after consulting a voice specialist who eventually helped her regain her singing voice. During six months of vocal rest, she explored her talents as a songwriter, composing her first song, entitled "Liza." The voice that emerged from her hiatus has since been described as soft and vulnerable yet controlled and naïve.

Leaving the hard-hitting punk vocals of Placebo behind her, in 1996 Feist became the bassist for Noah's Arkweld and, in 1998, became guitarist for the band By Divine Right. Feist, using only her last name, released her debut album through the small Bobby Dazzler label in 1999. Monarch (Lay Your Jewelled Head Down) attracted a small following, but did not reach a wide audience. During this time, Feist moved in with friend Merrill Nisker, a bawdy electro-rock artist who went by the stage name Peaches. Feist performed and recorded with Peaches and, through this, formed a long-term working relationship with Canadian electro-musician and pianist Gonzales (Jason Charles Beck). The trio moved to Europe together to tour; however, Peaches eventually broke off on her own and Gonzales and Feist, along with well-known French music producer Renaud Letang, began collaborating on Feist's second album, Let It Die. The album included five covers and six originals and was released in 2003. While Feist, Gonzales and Letang initially had little ambition for the album's commercial success, Let It Die was quickly picked up by Canadian indie music label Arts and Crafts and was promoted in a 33-month world tour. It earned Feist an international fan base and platinum certification.

Open Season, a collection of remixes and collaborations, came out in the spring of 2006 as a bridge to Feist's next official album, 2007's The Reminder. While The Reminder sold 18 000 copies in its first week and debuted at number 2 on the Canadian sales chart, the album took off later in the year after the single/video "1234" was used in an Apple iPod nano commercial. The album was certified double-platinum in Canada and gold in the United States, and has sold more than 1.2 million copies worldwide. Feist was invited to participate in the Cultural Olympiad of the 2010 Olympic Winter Games in Vancouver.

While her solo career has taken up much of her time, Feist has contributed to all four albums by Broken Social Scene (headed by Kevin Drew) and performs with the group when scheduling permits. She made a guest appearance on American indie band Wilco's track "You and I" in 2009 and also recorded the song "Service Bell" with the Brooklyn-based band Grizzly Bear for the AIDS charity Red Hot + Blue.