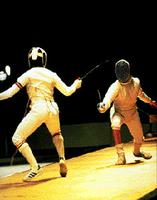 Fencing was practised in ancient times as a pastime as well as in war. Skilful swordplay with light weapons developed in the 14th century when gunpowder made heavy armour obsolete. As duels were gradually outlawed, fencers refined their skills into the elegant art of fencing.

The organized sport of fencing emerged at the end of the 19th century as a contest in which the number of hits are counted to determine the winner of a bout. Fencing was included in the first modern Olympic Games in 1896. Fencers today compete in categories determined by the type of sword used. The foil is light and flexible; the épée is as long as the foil but heavier and less flexible; and the sabre is a cut-and-thrust weapon. The target area of the body varies with the type of sword (generally, the foil target is the trunk of the fencer, the sabre target the trunk, arms and head, and the épée target the entire body). Women now compete in all three events, although this was not always the case, women's sabre being a recent addition. Electrical scoring machines, first developed in the 1930s, are used to record hits; foil and sabre fencers wear an electrically conductive jacket over the target area. With protective masks, gloves and jackets, there is little danger in the sport, which demands subtle tactics, poise, speed and balance.

In Canada, fencing schools were well attended in the late 18th and early 19th centuries, and the sport began to flourish again in the late 19th century. The Toronto Fencing Club and a women's fencing club at Toronto's University College were formed in 1895. During the next decade, fencing clubs were established in eastern universities, and in 1902 the first Canadian championships were held. The 1930s saw further development, and after WWII immigration from Europe brought distinguished fencers and masters. Fencing is organized by the Canadian Fencing Association.

Canadian fencers, both men and women, have competed in the Olympic Games since 1932, but have been most successful in the Commonwealth Games and Pan-American Games. Several silver and bronze medals have been won at the Commonwealth Games, and in 1954 the men's sabre team won the gold medal. At the Pan-Am Games, Canadians have won a number of bronze medals; silver medals were won by the women's foil teams in 1975 and 1979. In the 1986 Commonwealth Games, Canadian fencers swept the sabre and épée individual gold, silver and bronze medals, and also the team gold. The 1987 Pan-Am Games saw Jean-Paul Banos of Montréal win a gold medal in men's sabre. Canada also won 2 silver and 4 bronze medals. These results reflect the improvement of Canadian fencers through the 1970s and 1980s. The men's épée and sabre teams both finished 6th at the world championships in 1991 and the épée team finished 7th at the 1992 Olympic Games in Barcelona, Canada's best fencing results in decades. Canada's highest Olympic placing in recent years was in 2004 when the team of Monique Kavelaars, Julie Leprohon and Sherraine Schlam placed 4th. In 2008 Canada's fencing team secured a 7th-place finish.