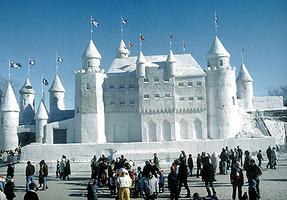 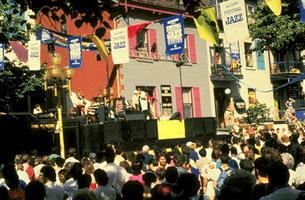 Festivals began in antiquity as religious and ritual observance of the seasons, often including sacred community meals or feasts. Today, festivals are held to commemorate, celebrate or re-enact events and seasons. Close to 200 major and numerous minor festivals are held in Canada each year. These celebrations have both indigenous and borrowed sources. Long before European contact, the Indigenous people marked seasonal changes with religious festivals. Among the Ojibwa there were 2 thanksgiving celebrations, one in spring at the rising of the sap to give thanks for deliverance from winter, and one in fall at harvest time.

On the Northwest Coast there were potlatches (ceremonial feasts marked by lavish gift giving), and among the Plains Indigenous people, powwows are still held as social events to maintain and promote their culture. Religious observances marked festivals imported from Europe in the 17th century. From the earliest days of colonization, French-speaking settlers celebrated, on June 24, the Fête St Jean-Baptiste, a Christian overlay to earlier pagan celebrations of the summer solstice.

Since the climate strongly shapes the Canadian way of life, it is not surprising to find these ancient threads of seasonal celebration in festivals held today. The awakening of nature after the winter provides the focus for several spring festivals. In Nova Scotia, there is the annual Annapolis Valley Apple Blossom Festival; in Ontario's fruit belt, the Niagara Falls Blossom Festival, featuring horticultural exhibits and the Blossom Festival Parade; and in BC, the Creston Blossom Festival.

Other spring events are the maple syrup festivals held in April in Ontario, Nova Scotia and Québec. There are 32 held in southern Ontario alone, and in Plessisville, Québec, the Maple Syrup Festival is held in the heart of Québec's maple sugar belt. Here numerous sugaring-off parties celebrate the process of converting maple syrup into sugar. Tied to history as much as the season is the week-long Festival of Spring (Tulip Festival) held in Ottawa each year. To express her thanks to Canadians for their hospitality during her war exile, Queen Juliana of the Netherlands gave 10 000 tulip bulbs to the city. The royal family of Holland and the tulip producers continue to send 25 000 bulbs each year, which bloom as an annual reminder. 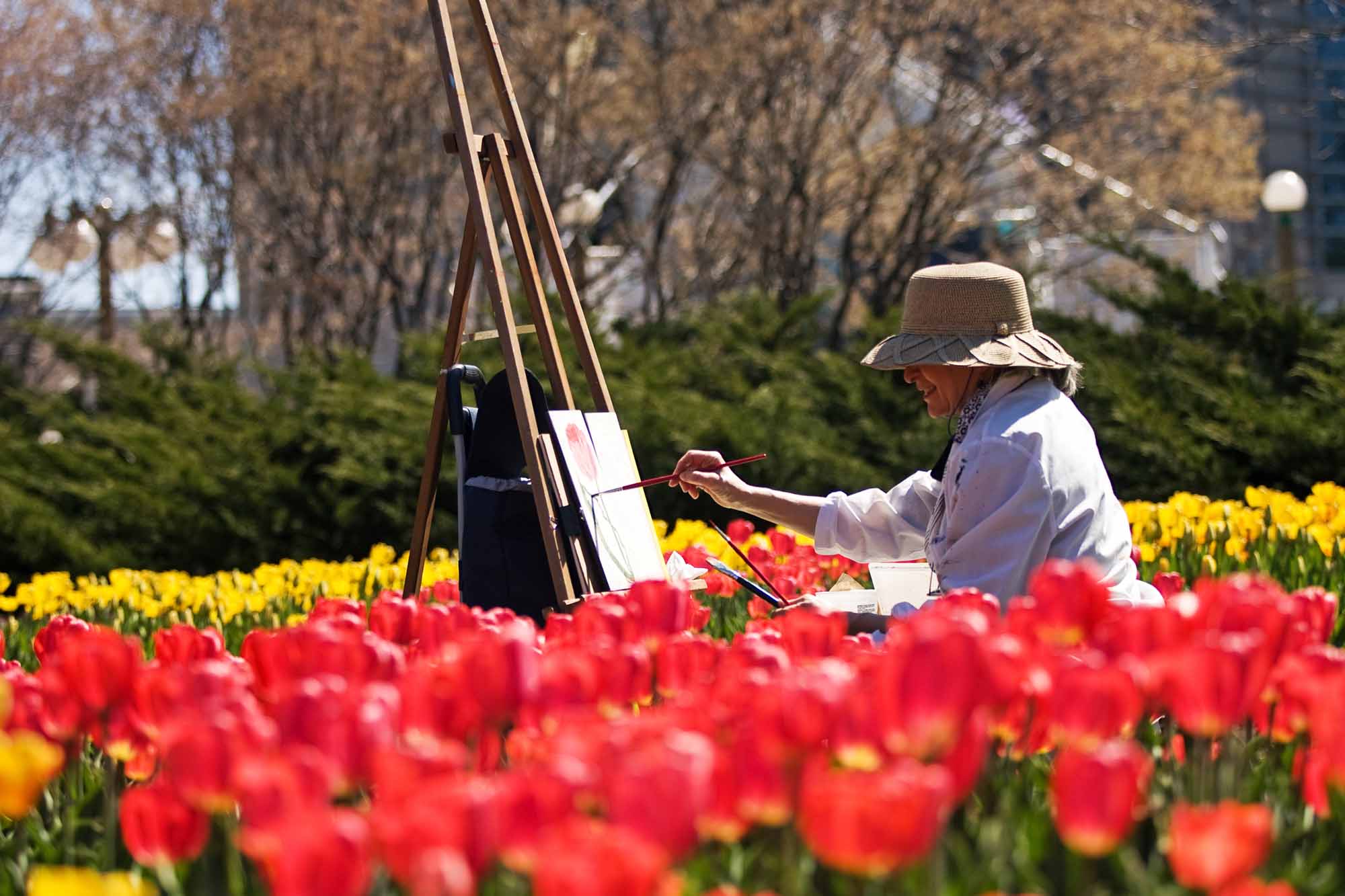 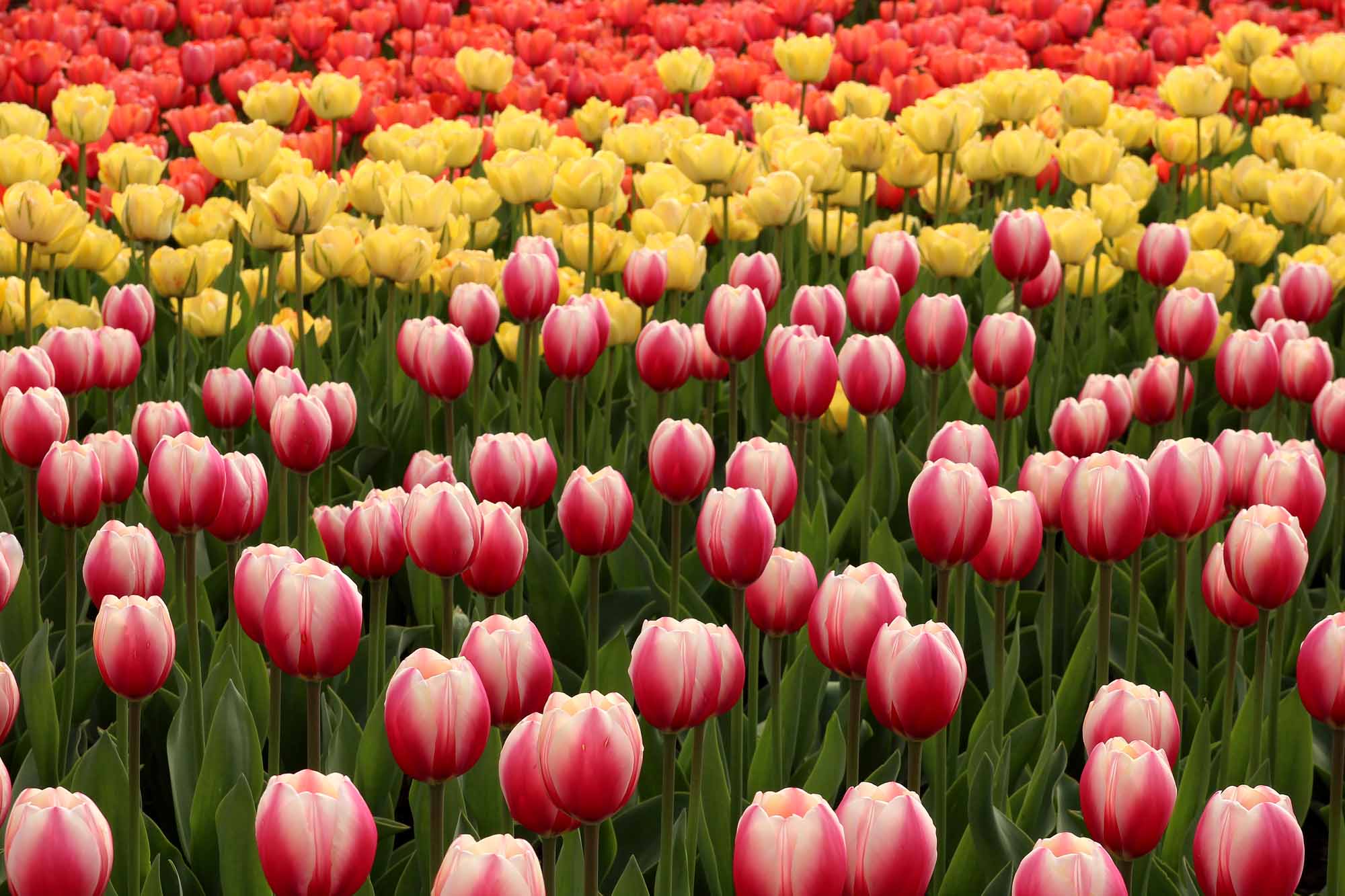 Spring tulips in full bloom at the Tulip Festival in Ottawa. Photo taken on: May 14, 2014 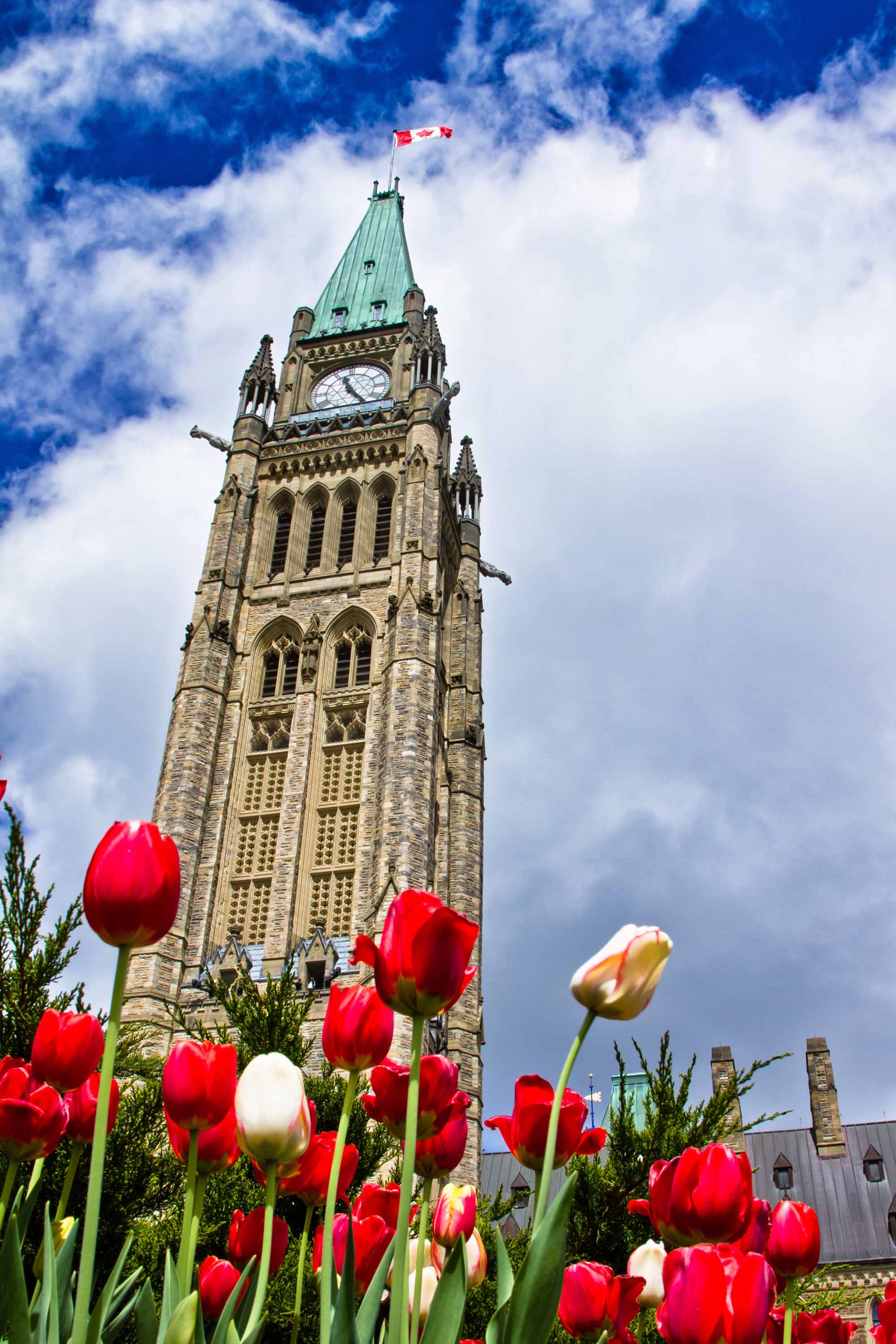 Peace Tower of Parliament building at Ottawa with tulips as foreground. This picture is taken during Ottawa Tulip Festival 2013. Photo taken on: May 12, 2013. 31018907 \u00a9 Aqnus Febriyant | Dreamstime.com
PreviousNext

The warm weather lingers briefly in Canada and more festivals are held in summer than in any other season. Food is the focus of many: potatoes, strawberries, salmon and shrimp, blueberries, oysters and trout are all feted where they are grown or harvested. In mid-July, the Nova Scotia Pictou Lobster Carnival marks the end of the lobster-fishing season, with fishermen's boat races a reminder of the traditional way of letting off steam after gruelling weeks at sea. Outdoor seafood suppers add to the festivities.

In late July in Altona, Man, there is the annual Sunflower Festival highlighting agriculture, with displays of sunflower seeds and also Mennonite cooking. In August at L'Anse Amour in Labrador, the annual Bakeapple Festival celebrates the tasty bakeapple berry with food, dancing and storytelling. Pine Days in Pine Point, NWT, in mid-June, has a more unusual focus. During a 2-day celebration, residents and visitors celebrate the longest day of the year in the land of the midnight sun with horseshoe tournaments and canoe jousting.

By fall, there are fewer seasonal festivals. These are held in recognition of the coming hard winter months, and in thanksgiving for the harvests. In the European tradition, Oktoberfests are held in many communities, particularly in areas where German immigrants have settled. One notable event is the Kitchener-Waterloo Oktoberfest in Ontario, attracting many students to a last fling before hard studying begins. And in Rimouski, Qué, the Fall Festival focuses on the relationship between man and the land. Survival skills are emphasized with a pheasant hunt and a clay pigeon shooting contest.

As a relief from winter, several festivals, usually beginning in late January and lasting through April in northernmost latitudes, ease the notorious "cabin fever." Most famous is the Québec Winter Carnival, a pre-Lenten celebration which first ran from 1894 to 1900 and was revived during the 1950s. The symbol of the carnival is a talking snowman, "Bonhomme Carnaval," who holds court in an ice palace and comes out to celebrate with the crowds. Ottawa holds the 10-day Winterlude festival along the Rideau Canal, one of the world's most famous skating rinks.

In Whitehorse, YT, a Sourdough Rendezvous features dogsled and snowshoe races (and more modern competition between snowmobiles), contests for flour-packing, and 1898 costumes and beards. The namesake food, first eaten in the north by prospectors, is featured at sourdough hotcake breakfasts. Most festivals in the Far North test survival skills, such as tea-making and animal-skinning under frigid conditions; these are featured activities at gatherings such as the Hay River, NWT, Ookpik Carnival and Yellowknife's Caribou Carnival.

Events That Formed the Country

As nature was tamed and European civilization took root, Canadians began to look back and started celebrating the events that formed the country. St John's Day celebrations in Newfoundland commemorate the day (24 June 1497) when John Cabot first sailed into the quiet water off the coast of Newfoundland. Loyalist Days in Saint John, NB, commemorates the arrival in 1783 of 4200 United Empire Loyalists fleeing the aftermath of the American Revolution. On Prince Edward Island, Charlottetown Natal Day in June honours both the birth of the city (1855) and the fact that Charlottetown is the birthplace of Canada as the setting for meetings of the Fathers of Confederation.

In Ontario in August, Simcoe Day honours the first governor of what was then Upper Canada, as well as the beginnings of the province in the 1790s. The opening of the Canadian West is celebrated with events such as Winnipeg's Red River Exhibition in June, Saskatoon's Pioneer Days in July, and Edmonton's Klondike Days, looking back to the late 1890s when prospectors surged north from the city in search of gold. In the Yukon, Discovery Day, held in August, commemorates the 1896 founding of Dawson City on the last frontier.

Another mark of Canadian development is multiculturalism, which has fostered the growth of many ethnic and multicultural festivals celebrating heritage and ancestry. Appropriately, Canada's original peoples celebrate with various Indian Days festivities held across Canada. In Ontario, the Brantford Six Nations Indian Pageant in August features crafts and theatre based on Indigenous history. The Opasquia Indian Days in The Pas, Man, is organized by residents of the Opasquia reserve to spotlight Indigenous woodland games, traditional foods, crafts and canoe races. In the Northwest Territories the unique Arctic Winter Games are celebrated each year, roving from town to town, with Inuit and Dene sports, dances, drumming, competitions and displays.

The Fête acadienne in PEI celebrates French settlement on Ile St-Jean (as PEI was first called). The distinctive nature of Acadian culture is illustrated in festivities that include Acadian drama, song, fiddling and step-dancing contests, and in New Brunwick's Foire Brayonne (celebrated in late July), founded in 1979 to showcase folksinging and culture. In Manitoba in June there is the Fête Franco-Manitobaine, celebrating the French presence in Manitoba, dating from the mid-1700s. Folk concerts in the traditional boîte-à-chanson style and French-Canadian dancing and food are part of the entertainment. In Québec, there are events such as Sherbrooke's Festival des cantons and Québec City's annual Festival d'été.

Other groups who helped build Canada also pay tribute to their ancestral heritage. In Nova Scotia, descendants of Scottish settlers celebrate throughout the summer. In Pugwash, the Gathering of the Clans with caber tossing and drum and pipe-band contests is the first event of the season, followed by the Antigonish Highland Games in July and the Festival of Tartans in New Glasgow in August. The influence of Ukrainian settlers was felt most on the Prairies, and in Dauphin, Man, Canada's fifth-largest ethnic group hosts Canada's National Ukrainian Festival. At Gimli, Manitoba, where a self-governing New Iceland flourished in 1875-81, the Icelandic Festival or Islendingadagurinn is held each year with parades, songs and poetry.

The newest entrants on the festival calendar are the multicultural festivals: Toronto's Caravan, Winnipeg's Folklorama, Regina's Mosaic and Edmonton's Heritage Days. All gather together and share the food, culture and spirit of the various ethnic groups. The Canadian Heritage Festival is an annual amateur folkloric performing-arts event co-sponsored by the federal government and the host province, while the Festival de Drummondville in Québec, which has added the word "folklothèque" to the French language, annually celebrates folklore and popular culture, including that of the local Abenaki people. Heritage festivals are often held in conjunction with other major events (Olympic Games, Montréal, 1976; Saskatchewan's 75th Anniversary, 1980; Newfoundland's 400th Anniversary in 1983).

Other aspects of culture (art, music, theatre and film) have come to be celebrated in Canada as well. Festivals such as the Guelph Spring Festival in Ontario focus on music; the Banff Festival of the Arts in Alberta encompasses music, theatre and art. Individual styles of music are also celebrated: Toronto's Mariposa Folk Festival, the Winnipeg Folk Festival, the Festival International de Jazz de Montréal and the Edmonton International Jazz Festival are 4 examples. Other festivals focus on styles and eras of music: baroque, classical and religious music are the themes of several smaller gatherings held in Ontario each summer, while a newer celebration, the Montréal New Music Festival, features roots rock, ska and electronic pop.

Canadian theatre festivals have also grown up over the years in cottage country, finding ready audiences among vacationers from the cities. Others are long-established traditions drawing international audiences: the Stratford Festival in Ontario, founded in 1953, and the Shaw Festival, at Niagara-on-the-Lake, established in 1962, both balance Canadian and international works. A newer festival is Edmonton's Fringe Festival, featuring short works and street theatre. All summer long, the Charlottetown Summer Festival celebrates theatre (see Musical Theatre), and in St John's, the Summer Festival is a well-known mecca for theatre lovers. In Québec, festivals commemorate related art forms, such as mime, at the Festival international de mime, and humour, at the Festival Juste pour rire. Film has also attracted followers and is now feted: the World Film Festival in Montréal each August and Toronto's Festival of Festivals in September feature new international and Canadian films and retrospectives of genres, performers and directors.

Other festival celebrations range from the Canadian National Exhibition in Toronto, the world's oldest and largest permanent exhibition, to the Calgary Stampede (July), calling itself the Greatest Outdoor Show on Earth, with 10 days of World Cup Rodeo and chuckwagon races; and from Vancouver Island's All Sooke Day in July, celebrating pioneering woodsmen with log rolling, tree chopping, high rigging and axe throwing, to Yellowknife's Annual Midnight Golf Tournament, another commemoration of the longest day of the year. Toronto's Caribana Festival is a colourful 2-week celebration of Caribbean culture that begins in mid-July and culminates in a huge parade on the final Saturday of the festival. Whatever the season, the day, the occasion or the people, Canadians show with their festivals that they have much to celebrate.