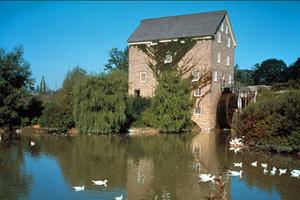 The gristmill at Black Creek Pioneer Village was moved to the site. It was typical of the water-powered mills of the early 19th century (Corel Professional Photos).

Flour milling is a mechanical manufacturing process which produces flour from wheat through comprehensive stages of grinding and separation. Canada's flour milling industry comprises mills which produce flour and other products for use in baked goods, biscuits, crackers, pasta and a wide range of food products. Byproducts of the milling process, such as bran, shorts (fine bran) and wheat germ are used in products such as breakfast cereals but are used mainly in the production of animal feeds. Small quantities of bran and wheat germ are also required in other foods for human consumption. Flour milling predates agricultural production; its evolution from a tedious manual chore to a highly automated, efficient and exact industrial process reflects many social changes and significant technological developments.

In North America in precontact times, Indigenous people hand-ground corn and other substances (eg, acorns) into flour used in porridge, flat cakes, etc. By the middle of the 16th century, the first European settlers had arrived in New France, bringing with them their flour milling technology. The first water-powered mill commenced operation in 1607 at Port-Royal. Many of the early wind- and water-driven mills have been preserved and may be seen in Ontario, Québec and the Maritimes. Pairs of circular millstones were used for grinding the grain. The best millstones, made of burr, a hard silicate found in France's Seine River valley, were constructed in segments, cemented together and bound with heavy iron bands. Both milling faces of the stones were grooved. The miller's skill lay in maintaining the grinding faces of the stones, since the precision of the millstone dressing determined the fineness of the grist. Stones were dressed with a chisel-faced hammer called a "mill-bill." A flour miller also required a "true-steel" (ie, a straight edge used to test the evenness of the millstones), a bar scale for weighing, and a slate for tallying the incoming grain and the outgoing grist.

For most of history, flour milling has been a very labour-intensive operation with grain, ground stocks in process and finished products requiring handling at every stage. The 18th century saw a growth of scientific ideas which brought significant changes to the process. Vertical and horizontal conveying of grain and ground materials by mechanical means (achieved by 1785) halved the manpower requirements in a mill and transformed flour milling into a completely mechanized continuous-process industry. Flour milling was one of the earliest applications of the steam engine. James Watt used one to drive a mill which he built in London, England, in 1786. The mill used 6 pairs of millstones and, before its destruction by fire in 1791, was enlarged to 20 pairs, driven by 2 steam engines.

In the latter part of the 19th century, Canadian millers were quick to replace millstones with steel rolls and to adopt the "gradual reduction system," a milling method developed in Hungary, which proved to be much more efficient with the use of steel rolls. The method involves milling in stages, the ground stock at each stage being sifted to remove portions of the finished product while the remaining stocks are classified for further gradual reduction. Many more-or-less successful variations have appeared throughout the past century. The most recent successful commercial processing method entails removing most of the bran from the wheat kernels prior to grinding. This process is slowly gaining international acceptance in the milling of certain types of wheat.

The construction of a railway linking the prairie grain-producing region with the Great Lakes markedly influenced Canada's milling industry, permitting western Canadian wheat to be shipped to the eastern seaboard ports for export and to the mills in eastern Canada for processing. The railway was extended to the western seaboard by 1885. Canadian wheat was already known for its excellent milling and breadmaking qualities and, as domestic and export demands increased, wheat production in the Prairies expanded to meet it.

By 1900, annual flour exports exceeded 80 000 tonnes. The first decades of the 20th century were a period of competition and rationalization in the industry. The number of mills decreased from 2550 in 1891 to 801 in 1922. The industry was affected by the Great Depression of the 1930s, but expanded during WWII. Since that time, the industry has been further rationalized and modernized as flour exports have fallen and most trading partners have developed domestic milling industries.

Modern flour mills are very highly automated and all parts of the process are easily adapted to computer control. Although very costly, this technology when fully applied enables a mill to operate for extended periods without continuous on-site operator presence or intervention, eg, throughout the night or during weekends. Improvements in mills' output capabilities and transportation together with periodic declines in flour demand contributed to a steady reduction of the number of mills in operation. During the late 1980s and 1990s there has been a small steady growth in the per capita consumption of flour as cereal flour-based products have become an increasingly important component of balanced nutrition and consumer food purchases. As of January 1997, Canada had 27 flour mills: Ontario had 12; Québec and Alberta, 4 each; Saskatchewan, 3; Manitoba, 2; BC and Nova Scotia, one each. Total milling capacity, 10 500 tonnes of wheat ground per day, produced slightly over 7500 tonnes of flour. The industry employs 2000 people and has an annual payroll of over $60 million.

Canada's principal flour export market is the US. However, Canadian mills export to over 30 countries throughout the world. The high-quality baking and processing characteristics of Canadian breads, pastry and durum flours make them suitable for a wide range of breads and pasta enjoyed as staple foods in many countries and cultures. While there has been a decrease in the number of large-scale gradual reduction system mills, there has been an increase in the number of significantly smaller and less complex mills which are generally designed to produce milled products to very specific requirements using, eg, organically grown grain and other specialty cereals the products of which are usually required in much smaller quantities than might be viable to produce in larger mills.

White flour for the Canadian market is enriched in accordance with regulations outlined in the Food and Drugs Act (see Food Legislation). Other optional additives are used to meet customer specifications; however, the kinds and quantities of each Food Additive are also controlled through the Food and Drugs Act and a system of inspection ensures a strict adherence to all regulations.

The Canadian National Millers Association is a national trade association representing virtually 100% of Canada's millers. The CNMA was founded 29 October 1920 and its permanent office is in Ottawa. It represents the business and public policy interests of the industry in dealing with the government of Canada, its agencies and other business organizations. The association is also active in export promotion and the dissemination of information concerning the characteristics of Canadian wheat flour and the Canadian milling industry. A number of CNMA members are also members of the separate Ontario Flour Millers Association, which serves the industry in dealing with regulatory and trade issues within that province.

Accredited operating millers may belong to the Association of Operative Millers, a US-based professional association which fosters professional development and training and technological state-of-the-art awareness among industry production and management staff.