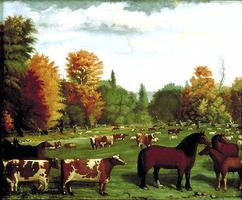 Ebenezer Birrell, a prosperous 19th-century farmer in southern Ontario, was so proud of his livestock that he painted their portrait (courtesy Art Gallery of Hamilton). 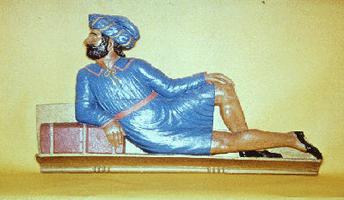 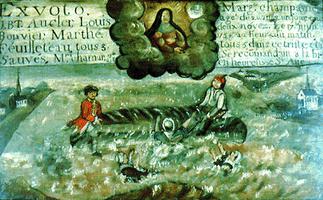 Because there were no foundries to produce metal sculptures, Québec artists usually carved in wood and then painted their figures realistically (courtesy CMC).
PreviousNext

Folk art embraces a wide range of artistic works, a mixture of naivety and sophistication, cultural tradition and individual innovation. Although varied definitions abound, folk art in general falls into 2 categories: cultural and individual. Cultural art has an ethnic basis (eg, French, English, German, Polish, Ukrainian), tends to be conservative, and reflects the common ethos in a community; individual art is innovative, the expression of a unique if sometimes eccentric personality. Whether they are paintings, sculptures, carvings or objects embellished with pictorial and decorative motifs, all folk-art products have popular appeal. The people who fashioned them intended them to interest the ordinary citizens who were their neighbours, friends and acquaintances.

Traditionally, folk art sprang from a desire to make human and meaningful the daily round of work and home life, and thus reflected the cultural and regional diversity in Canada. Contemporary folk art, often shut off from traditional sources and responding to the demand by museums and collectors for "goods," is an art of individual and aesthetic expression, using new techniques and responding to influences in modern society. While traditional folk art is usually anonymous, recent artists are known and specialize in particular media and styles.

Folk art mirrors the basic ideas and customs that regulate lifestyles, and may be based in religion, patriotic affection for king and country, satisfaction with daily living or appreciation for nature. Folk art is sometimes described as "primitive," for the artists are untrained, work by instinct and deal in a simple way with the basic truths as known to ordinary people.

Folk art based on religious belief has flourished in Canada from the days of early European settlement and embraces a sense of continuity and tradition. Visitors to 18th- and 19th-century Catholic Québec described the pious decorative mottos, the religious paintings depicting old themes, and the cocks on church steeples, which reminded parishioners of St Peter's in Rome. They had been painted or fashioned by simple, devout people who lacked artistic training but had in common a great desire to express their inner artistic sensibilities. A significant form of early religious folk art, copied from France, was the VOTIVE PAINTING that illustrated miraculous happenings such as escape from impending shipwreck through the intervention of Ste-Anne (collection of Ste-Anne-de-Beaupré, Québec). The sculptured figures of the Holy Family and favourite saints that adorned many churches inspired the carving of more primitive copies for private religious devotion.

Wayside crosses throughout Québec were erected at many crossroads and the crucified Christ who hung on some of them was often carved by a local worker. Such carvings sometimes rose to the level of the finest folk art. An example originating in the Gaspé Peninsula and now in the Musée des beaux-arts de Montréal is a massive, simple, austere, Christ figure, with dignified simple planes; it does not strive for the realism of high art. Local people carved nativity figures for the Christmas crib, painted pictures of the lamb on banners that were carried in religious processions, or carved sugar molds with biblical motifs. All these artifacts were reminders of religious teachings and emphasized the importance of religious life in an agreeable way. In Charlevoix County during the 1930s and 1940s, a group of local artists pictured well-known themes, some of them religious, such as the wise men visiting a local home and mingling informally with the family at Christmas.

The religious art of Protestant provinces in Canada seems less obvious because they did not allow representations of God. Yet wall memorials to departed relatives or samplers embroidered in Nova Scotia during the early 1800s demonstrate deep religious piety. Protestant ORANGE ORDER lodges carried painted banners with religious symbols in their street processions, and many Protestant homes had little paintings of King Billy on his white horse. Religious banners hung in Sharon Temple, built by a Protestant group north of Toronto. A century ago Anna WEBER, a Mennonite, painted motifs in Waterloo County, Ontario, that symbolized nature as described in the "Songs of Solomon." Early TOMBSTONES in local cemeteries almost everywhere in Canada are often overlooked as folk art. One such stone in Ontario recalls graphically how a pioneer was killed by a falling tree when clearing the primeval forest. An 18th-century Halifax tombstone shows Ezekiel blowing his trumpet on Judgement Day, and nearby another stone pictures Adam and Eve flanking the serpent encircling an apple tree. Another example of religious folk art is the "corn dolly" artistically woven from the last sheaf of the harvest and sometimes thrown into the fire to propitiate the gods, which harks back to superstitions in England during the Druid age.

Loyalty to country, racial origin and religion have been common themes of the folk artist in Canada, whether British, French, German, Italian, Mennonite, Ukrainian, Doukhobor or Polish. Battle memorials in the form of descriptive paintings or soldiers carved in full uniform are numerous, and patriotic mothers hooked pictures of tanks and flags on mats during both world wars. Loyalist immigrants to Canada left no doubt of their continuing British sympathies; they erected a signboard on which was painted the head of George III in front of the King's Head Inn at Burlington, Ontario. A local carver fashioned a statue of General WOLFE that stood in a niche at a Québec street corner for many years. Lutheran immigrants from the Palatine region of Germany who settled along the upper St Lawrence in 1784 fashioned a weather vane in the form of a swan because the Swan of St Lothair had been a traditional symbol in their homeland. It declared their ancestry. Inn and trade signs in English and French towns were like a popular picture gallery which fascinated the people, and in imitation similar signs were painted in Canada. Traditional designs for clothes and decorations used in Europe were continued in the New World.

Ukrainian Easter eggs are an ancient and sophisticated folk art with religious and symbolic significance. The tradition of hand-lettered and decorated documents, books and miscellaneous items was brought by Mennonite immigrants to Ontario between the 1780s and 1830s (see GERMANIC FRAKTUR AND CALLIGRAPHY). Gradually, Canadian loyalties and heroes developed. John A. MACDONALD was featured on a sampler in the 1880s, and designs incorporated maple leaves, beavers and Mounties on any number of objects. Other occupational figures, particularly the cowboy and the pioneer settler, were favourite motifs in folk art.

When sailing ships were links with distant places, up to the early 20th century, much distinctive folk art relating to the sea was produced, particularly in the schooner and lighthouse motifs on the eastern seaboard (see SCULPTURE). Crews had an affection for their ships and named vessels in honour of celebrated naval heroes such as Admiral Nelson, or after more personal associations, such as the Mary W. Craftsmen in the shipyards of Québec City, Saint John, Digby or Summerside carved figureheads of buxom women or a tall admiral to illustrate ship names. A notable carving graced the clipper MARCO POLO, which had been built near Saint John and made record-breaking voyages to the Orient. Sailors on distant voyages passed long hours in a myriad of activities; some made models or paintings of their ship to be displayed at home, often with intricate riggings; others carved trinket boxes or whalebone ivory, engraving the polished surfaces with pictures of unicorns, polar bears, or tokens of endearment for absent loved ones.

Similarly, much Canadian folk art relates to farming, which played a major role in national life. Agriculture in Ontario and Québec reached a peak of visible prosperity in the later 19th century when vast BARNS were constructed, many of them crowned by decorative metal and wooden weather vanes fashioned as horses, cows or sheep. Progressive farmers of the day exhibited their finest livestock at country fairs or at provincial exhibitions in Toronto, Québec City and Fredericton, and artist/craftsmen such as J.W. Swift of Toronto were commissioned to paint the best stock in watercolour or oil. Some farmers still hang hand-painted signs depicting their particular herd type at the entrance to their property. Dutch immigrant Jan Wyers has produced some of the country's finest popular paintings of the last half century, especially of farm life, and William Panko, a western artist of the 1940s who knew nothing about perspective, painted scenes that reveal a direct joy in the fresh outdoors.

On the self-sufficient farm, where a variety of tasks were performed in the fields and in the home, many useful objects were fashioned in an attractive shape and with fine, meaningful ornamentation. Hand tools, trivets, molds, and combs used in spinning were often examples of high craftsmanship (see LEATHERWORKING). Wooden butter stamps served as a trademark and as proof of the farmer's aesthetic sensibility.

Rural women recycled textile fibres into decorative hooked RUGS and QUILTS whose blocks of colour and design rival fine contemporary nonobjective painting. They embroidered pillowcases, table linen and handkerchiefs with pictorial tokens of love. Whittlers in the family created models of family pets and dancing dolls, and carved wall shelves and cabinets, rocking horses and TOYS for the children (see FURNITURE, COUNTRY). More sophisticated sculptors turned out elaborate decoys for the hunting season, painted to depict every detail of the species. Wooden chests served as travelling trunks and as storage boxes in the home.

With increasing industrialization, many craftsmen turned their skills to creating miniatures of a passing rural life, recording the skills, amusements and tales of the past in tangible form for the next generation. Other carvers depicted the new technology, in steam engines that worked and in intricate models of farm machinery.

Folk art does not have to be useful, or based on culture or tradition. It may be purely whimsical, rooted in the particular imagination of the artist. Garden ornaments, birdhouses, shadowboxes and figurines may be exotic, erotic, humorous or fanciful, though always direct and spontaneous in their "folksiness." The sculptor J.B. Côté of Québec once carved a wooden figure, a gaunt, gangling youth who sang in the choir and had about him the air of a young "man-about-town" but who was trussed or strangled by his starched Sunday collar. His attractive human qualities gave him immediate popular appeal and, like all successful folk art, enlivened the life of ordinary people around him. 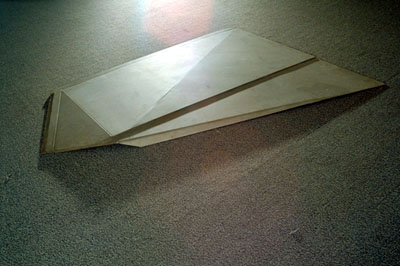