Fort Resolution, NWT, incorporated as a hamlet in 2010, population 474 (2011c), 484 (2006c). The Hamlet of Fort Resolution is located on the south shore of GREAT SLAVE LAKE, 153 air km south of Yellowknife. This community, where trapping still provides the livelihood for the majority of Dene and MÉTIS residents, dates back to the establishment of the NORTH WEST CO trading post in 1786. The HUDSON'S BAY CO established a post in 1815, and when the companies united in 1821, the post was called Fort Resolution. 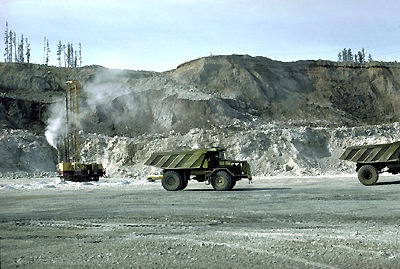 The lead-zinc mining operation near Fort Resolution in the NWT was finally closed in 1987 (photo courtesy Govt of the NWT).

The community became an important medical and educational centre when the Oblates and Grey Nuns built a large tuberculosis hospital there in 1938-39. When the responsibility for the care of TB patients was transferred to Edmonton in 1956, Fort Resolution began to decline in importance as a regional centre. The traditional hunting-trapping economy of the community was diversified in 1964 with the construction of a local sawmill; however, the nearby Pine Point Mines closed in 1987.