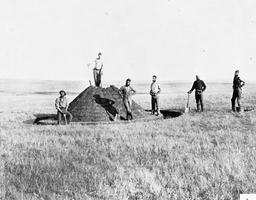 Sappers building a boundary mound on the prairies, 1873. (Courtesy Library and Archives Canada/C73304) 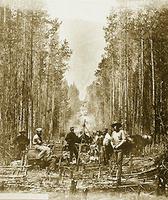 The section from Lake of the Woods to the summit of the Rocky Mts was agreed to in the Convention of 1818, and that from the Rockies to the Strait of Georgia in the Oregon Treaty of 1846. As ultimately surveyed and demarcated, the boundary actually consists of several chords drawn between astronomically determined points on the curved parallel. The parallel also forms the first baseline for the Dominion Lands Survey System by which the territory that became the provinces of Manitoba, Saskatchewan and Alberta and some adjacent parts of British Columbia and Ontario was subdivided. It and the baselines every 24 miles (38.6 km) north of it are east-west survey control lines which are run as 6 mile (9.6 km) chords to curved parallels of latitude.

This episode looks at the thing that literally defines Canada - the border. What happened to First Nations when the border was drawn right through their land? And as American "draft dodgers" came north, why did thousands of Canadians volunteer to fight for the U.S. during the war in Vietnam?

History of the Canada-US Border in the West