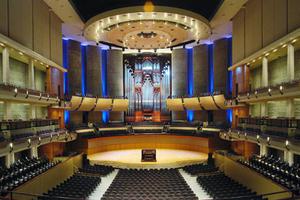 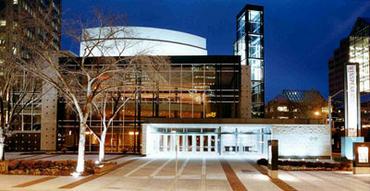 The Francis Winspear Centre for Music is situated in the arts district in the heart of downtown Edmonton (photo by the Ellis Brothers).
PreviousNext

The Francis Winspear Centre for Music, a 1932-seat concert hall which is the home of the Edmonton Symphony Orchestra, was inaugurated in EDMONTON, Alberta, in September 1997. It is situated in the arts district in the heart of downtown Edmonton, close to the EDMONTON ART GALLERY, the CITADEL THEATRE, the Milner Library and the City Hall. Built at a cost of $40 million, it was designed by Douglas McConnell of the Cohos Evamy Partners architectural firm, in association with Artec Consultants Inc of New York, internationally renowned acoustical experts.

The tall, rectangular "performance chamber" is shaped in the traditional "shoebox" design found in some of the most renowned 19th-century European halls, such as the Tonhalle in Zurich, the Concertgebouw in Amsterdam and the Musikvereinsaal in Vienna. Seating wraps around the sides and back of the hall on four levels. Its sightlines are good, all seats are in relatively close proximity to the stage and the acoustics are excellent. Designed as a venue for both unamplified and amplified music, an acoustic canopy and reflectors are situated directly over the stage to reflect sounds outward to the audience, and the hall can be partially or fully draped with curtains and cloth banners, depending on the amount of reflection or absorption desired for a particular event.

The 10-day opening celebrations for the Winspear Centre in September 1997 covered the gamut of musical styles and tastes, showcasing such international stars as soprano Jessye Norman and jazzman Herbie Hancock. There were world premieres of orchestral works by Canadian composers, including a rare Triple Concerto for Violin, Cello and Piano by John Estacio, the EDMONTON SYMPHONY ORCHESTRA's composer-in-residence, a performance of Mahler's Symphony of a Thousand, and concerts by Canadian country-music singer Terri CLARK and Irish folk group The Chieftains, among other events.

Since it opened, numerous artists have performed at the Winspear Centre, including the TAFELMUSIK BAROQUE ORCHESTRA of Toronto, the ST LAWRENCE STRING QUARTET and jazz singer Holly COLE. Fulfilling its secondary mandate as a cultural centre in the broader sense, the hall has hosted such diverse events as public lectures by Gloria Steinem and Dr Jane Goodall, and a Canadian Football League Awards gala. 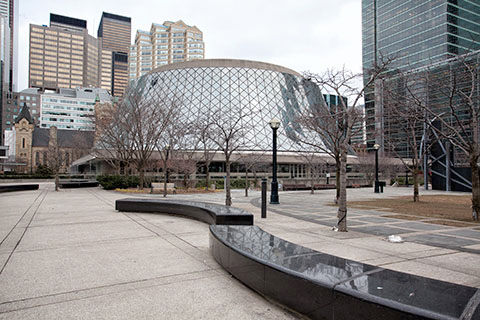