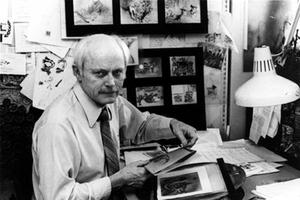 Frédéric Back, OC, CQ, animator, illustrator, muralist, teacher, activist (born 8 April 1924 in Sarrebrück, France; died 24 December 2013 in Montréal, QC). Frédéric Back was one of Canada’s most celebrated animators and a pioneering environmental activist. His highly acclaimed films — typically for young children, with a message related to ecology or Québec culture — are renowned for his technique of drawing on frosted acetate with coloured pencils in a gentle, post-Impressionist style. He won numerous awards and grand prizes including two Academy Awards, a Governor General's Performing Arts Award, a Prix Gemeauxand a Prix Jutra. He was made a knight of the National Order of Québec and an officer of the Order of Canada.

The son of a musician and a brush-maker’s assistant, Back grew up in Strausbourg and moved with his family to Paris in 1937, where he studied art at the École Estienne. Back also attended the École régionale des beaux-arts in Rennes, France, where he was a student of artist Mathurin Méheut, who specialized in paintings of marine life. Back began his career as a painter and had an exhibition of his paintings at the Salon de la Marine in Paris in 1946.

He immigrated to Montréalin 1948 at the invitation of his pen-pal, Ghylaine Paquin, whom he married the following year (they remained married until his death and had three children together). Back taught at the École du Meuble and the École des beaux-arts de Montréal. In 1952, he began working in the graphic arts department at Radio-Canada, contributing illustrations and visual effects to programs, and doing set design and model-making for many educational and scientific shows. He also contributed historical illustrations to the National Film Board documentary short Samuel de Champlain (Québec 1603) (1964), directed by Denys Arcand. (See also Samuel de Champlain.)

In 1968, Back joined Radio-Canada’s new animation department, founded by producer Hubert Tison. Back created title sequences, promotional films and special presentations for Radio-Canada programs, and also made nine award-winning animated short films, beginning with Abracadabra (1970), the story of four children from around the world who try to rescue the sun from an evil sorcerer, and La Creation des oiseaux (1972), inspired by Aboriginal legends about the passing of the seasons.

Back’s third film, Inon (The Conquest of Fire) (1972), tells an Algonquin legend about animals on a quest to capture fire from the god of thunder and return it to their human friends. Illusion (1975) follows a sinister magician as he tries to lure a group of children away from nature.

Taratata (1979) pays tribute to the various celebrations in Québec on St-Jean-Baptiste Day; and

Tout rien (1980) — which earned Back his first Academy Award nomination — is an allegory portraying humankind’s desire to appropriate nature’s beauty and resources. Back also created animated sequences for Jean-Yves Landry’s The Firebird (1980), a production of a Russian ballet that won an International Emmy Award.

Back’s seventh short film, Crac (1982), in which he uses a rocking chair to trace the history of both a family and Québec culture, proved to be one of his most acclaimed. It won 23 international awards including an Academy Award. However, it was around this time that Back completely lost the sight in his right eye due to a chemical he had been applying to his work.

His next film, L'homme qui plantait les arbres (1987), comprises more than 20,000 drawings and took five years to make. Based on a Jean Giono story about a man who transformed a barren landscape single-handedly, the film won more than 40 awards including an Academy Award. Back’s final film, Le fleuve aux grandes eaux (1993), took four years to complete and comprises more than 17,000 drawings. An animated essay about the St Lawrence River narrated by Donald Sutherland, it was also nominated for an Academy Award. Following the film’s release, Radio-Canada shut down its animation department and Back retired.

Back was commissioned to design the interior of the Hélène de Champlain Restaurant in Montréal, which was used as a reception centre during Expo 67. He also painted murals in churches in and around the city, and in 1967 he created L’histoire de la musique à Montréal, a stained-glass mural at the Place des Arts Métro station that depicts the history of music in Montréal.

Back devoted much time and energy throughout his life to the protection of animals and the preservation of the environment. A lifelong vegetarian who planted some 10,000 trees on his country estate near Montréal, he was a founding member of the Québec Society for the Defense of Animals (SQDA) and the Society for Overcoming Pollution, as well as a member of the Société d'Eau Secours!, devoted to protecting water resources.

His environmental concerns also deeply informed his art. The Globe and Mail’s Alan Hustak argued that “Back’s films — particularly La Création des oiseaux, Illusion, Taratata and Tout Rien — exhibit a deep empathy with nature and a fear of the consequences that arise from its abuse.” In 2004, Back received the inaugural Eco Hero Award from the Planet in Focus Environmental Film Festival in Toronto.

Many of Back’s films are considered animation classics, and are studied in universities and animation schools for their technical, artistic and cultural content. In 1987, the American Film Institute presented a retrospective of his work as part of the Walter Lantz Conference on Animation.Retrospectives of his work were also exhibited by the Montréal Museum of Fine Arts in 2009 and the Tokyo Museum of Contemporary Art in 2011 (the only other animator to be exhibited there was Walt Disney). In 1984, Crac was named the sixth-best animated film of all time at the Olympiad of Animation in Los Angeles.

A documentary on Back directed by Phil Comeau, Frédéric Back: Grandeur nature, was released in 2012. His son, Francis Back, is an accomplished illustrator and storyboard artist. Following Back’s death from cancer, a public memorial was held at the Maison symphonique de Montréal andan exhibition of his key works was displayed in the Hall of Honour at Montréal City Hall.