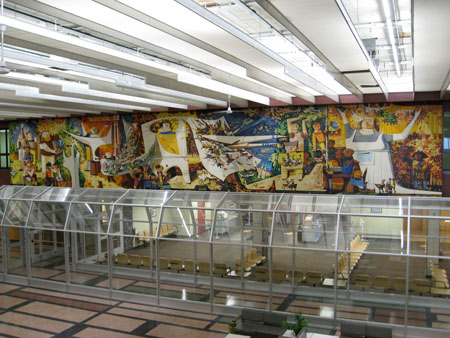 This fog-free site was selected by the British and Canadian governments in 1935 to accommodate such flights as the regular transatlantic air service that had developed in the 1930s. By 1938 construction of what was then one of the world's largest airports had been completed and the community of Gander begun.

During WWII Gander was a strategic link in the North American chain of defence, and in the RAF Transport Command's vital Atlantic FERRY COMMAND. The RCAF established a base here in 1940, which was also used by the USAF. The civilian use and enlargement of facilities after the war attracted a population of about 3000 by 1951, and by 1954 construction of a planned townsite began.

Although Gander's importance as a refueling point has diminished, it has continued to attract many international flights, particularly from eastern Europe, and thus records many of the defections from former communist countries that occured in Canada. Air Traffic Control at Gander, the only oceanic unit in Canada, has jurisdiction over international and domestic airspace from west of Nfld to the mid-Atlantic and north to Greenland.

In December 1985 Gander was the focus of worldwide attention when a DC-8 carrying 256 passengers, 248 of them US soldiers returning from the Middle East, crashed after takeoff. All passengers and crew were killed in the worst air DISASTER over Canadian soil.

Evidence of Gander's involvement in AVIATION can be seen throughout the community. All its streets are named after aviators - of local and world renown - and its buildings are named after famous aircraft. Throughout the town are model aircraft constructed of concrete and pipe and during the summer months retired aircraft are placed throughout the community for everyone to enjoy. In recent years the town has also become a major service centre and investors are attracted by its 2 industrial parks.