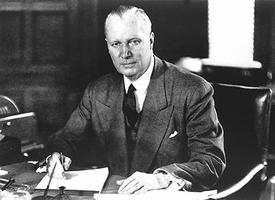 George Alexander Drew, lawyer, politician, premier of Ontario 1943-48 (b at Guelph, Ont 7 May 1894; d at Toronto 4 Jan 1973). After recovering from a serious wound suffered in WWI, he attended Osgoode Hall. Called to the bar in 1920, he practised law in Guelph, of which he was mayor in 1925. He was made master of the Ontario Supreme Court 1929 and became first chairman of the Ontario Securities Commission 1931. An ardent Conservative, he was elected leader of the Ontario party 1938, and led it to victory 1943. He served as both premier and minister of education, and founded the dynasty that ruled Ontario into the 1980s.

In 1948 he entered national politics as party leader, but he failed in 2 elections to mount an effective challenge to the Liberal administration. He resigned as leader 1956 and was appointed Canadian high commissioner to London, England, in 1957 - the last distinction in a noteworthy public career. Eloquent, combative and patrician in bearing, Drew was never wholly at ease in the hurly-burly of democratic politics. His opponents labelled him reactionary, a reputation largely belied by his record as premier.