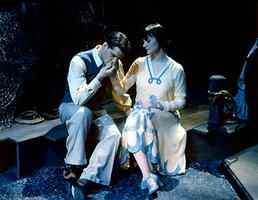 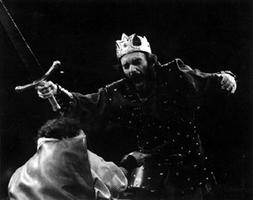 The Globe Theatre, Regina, was founded in 1966 when Canadian Ken Kramer and British-born Sue Richmond Kramer received a $3000 grant from the Saskatchewan Arts Board to start a touring company for young audiences. It was the first professional educational theatre company in Saskatchewan and, at the time, the province's only professional theatre company. The Kramers were actors as well as co-artistic directors, and Ken Kramer also directed individual Globe productions. The couple had met while working at the Theatre Centre in London, England, under the direction of Brian Way, a leading authority on child drama and educational theatre. Initially, the Globe's repertory consisted entirely of plays by Way and adaptations of Shakespeare, staged arena-style to encourage audience participation. The company toured extensively in Saskatchewan, performing in large and small communities for primary and secondary school students. In 1975/76 this included 142 towns over 32 weeks for a total of 290 performances.

In 1968, the Globe produced and toured Bertolt Brecht's The Good Woman of Setzuan, and the success of this and subsequent individual productions for adults led to the formation in 1970 of the Globe Repertory Theatre, initially resident in the Jubilee Theatre at the Saskatchewan Centre of the Arts and then housed in rented quarters in downtown Regina. In 1981, the company acquired its own permanent space in the Old City Hall, formerly the Old Regina Post Office, a heritage building on the Scarth Street mall. Here, as in its earlier locations, the Globe retained the arena theatre configuration that was so integral to its touring productions for schools. The Globe continued to take its adult productions to major Saskatchewan centres into the 1980s and, with its combined adult and youth audiences, reached a considerable proportion of the Saskatchewan population, in some seasons as high as 10%.

Together with pre-modern and modern classics and contemporary international works, the Globe began in the 1970s to offer one or two Canadian plays per season and, in 1975, with the engagement of Rex DEVERELL as playwright-in-residence, affirmed its commitment to the development of drama grounded in the Saskatchewan context. Originally from Ontario, Deverell had begun writing regionally specific children's plays for the Globe's school tours in 1972 and premiered his first play for adults, Boiler Room Suite, on the Globe's main stage in 1977. A series of collective plays and docu-dramas scripted by Deverell did much to establish the Globe's reputation as a left-leaning, populist theatre, closely attuned to Saskatchewan's political history. Among these plays were No. 1 Hard (produced in 1978), dealing with federal farm policy; Medicare! (produced in 1980), which looked at the physicians' strike of 1962; and Black Powder: Estevan, 1931 (produced in 1981), which marked the 50th anniversary of the Estevan coal miners' strike. In addition to these and other plays by Deverell, the Globe commissioned and premiered new works by a number of other playwrights, including Carol BOLT, Rod Langley, Len PETERSON and Ken MITCHELL.

Following Sue Kramer's death in 1978, Ken Kramer continued as artistic director of the Globe until 1990, with Brian Way serving briefly as associate director in the mid-1980s.

In 1990, Kramer was succeeded by Susan Ferley, under whose artistic direction the Globe moved away from its populist political stance, included more light commercial fare in its programming, and decreased its emphasis on the development of new Canadian drama. However, Ferley did commission and produce the work of several Saskatchewan writers including Greg Nelson's Speak, Ken Mitchell's The Great Electrical Revolution and several plays by Gail BOWEN. Known primarily for her mystery novels, Bowen adapted children's stories for production at the Globe, as well as her novella 1919: The Love Letters of George and Adelaide, co-authored with Ron Marken and concerned with Saskatchewan soldiers returning home from World War I. Entitled Dancing in Poppies, this adaptation was premiered in 1993 and restaged in 1994 for performance before Prince Edward, who had bestowed his first and only patronage in Canada on the Globe Theatre in 1992.

Because of changes in provincial funding programs, Ferley struggled to maintain the touring program at its previous level although, considering the theatre's size and population base in comparison with other theatres, the program remained ambitious. Tours were mounted only every other year and travelled on a much reduced circuit, which in 1995/96 encompassed 57 communities and 77 performances in 9 weeks.

When Ruth Smillie succeeded Ferley in 1998 she dropped the touring company but continued with similar programming on the main stage, with some significant differences. Smillie allocated more resources to set and costume and redefined the arena theatre's repertoire to include larger scale works, particularly family shows for the Christmas season. Productions of Peter Pan, Anne of Green Gables, A Christmas Carol, The Hobbit, Wizard of Oz, Honk, Beauty and the Beast and Cinderella assumed considerable importance in the context of overall box office revenue. In 2009, for instance, the seven-week run of Peter Pan accounted for 20 000 of the 57 000 tickets sold for the entire season.

Promoting their work with the slogan "Live is Better," the Globe saw its expenses and administrative costs as well as revenue increased from an operating budget of $1.2 million in 1998 to expenditures of nearly $3.2 million in 2009/10. In that season the main stage operated at 90% capacity and the number of patrons served by both performance spaces doubled from the 30 000 served in 1998/99.

Although remarkable at a time when other theatres were struggling to maintain the status quo, such growth was not without its challenges. In the 2006/07 annual report Smillie observed, "As the organization grew, we found it increasingly difficult to achieve a balance in main stage programming between the three key mission areas, 'to entertain, educate and challenge' while trying to ensure that box office sales would generate sufficient revenues to keep the theatre in the black."

Smillie generally programmed three Canadian plays within her six-play main stage season, and initially these included the work of Saskatchewan playwrights such as Floyd Favel, Eugene Stickland, Connie GAULT, Ken Mitchell and James O'Shea. However, patron complaints regarding the language and content of some of this newer work may have led Smillie to gradually shift attention on the main stage away from the text-based work of local playwrights to more performative and multi-disciplinary work, especially that derived through collaborative devising, in the Sandbox Series. A range of local artists brought improvisation, dance, mask work, music, clowning, puppetry, film and photography to the Templeton Studio, a second stage space initiated by Ferley.

Some of the notable work that emerged in this space included Andrea Menard's Velvet Devil and Floyd Favel's Governor of the Dew, both of which toured to the NATIONAL ARTS CENTRE in 2002 and received special performances during the 2003 Globe visit of His Royal Highness The Prince Edward. The hugely popular Fusion projects (collectively developed performances by young adults) initiated by Joey Tremblay in the Sandbox Series led to the commissioning of full-length pieces written by Tremblay for the main stage. The Alice Nocturne, for instance, emerged out of the 2007/08 Fusion Project to appear in the main stage season the next year. Other main stage commissions for Tremblay have included a musical adaptation of Moliere's George Dandin and a full-length version of Elephant Wake, which had been originally seen at the Globe in the fringe-length version in 1997. The Globe Theatre's full-length version toured across Canada from the Vancouver Cultural Olympiad to Québec City and the National Arts Centre in Ottawa during 2009/10.

The Globe's growth under Smillie evolved within the context of a series of strategic plans which aspired, as noted in the 2009/10 annual report, to "the highest standards in art and business" using a "business model for selling live theatre" informed by "best business practices." Intended in part to diversify the theatre's source of revenue, one important initiative to emerge during this time was a theatre school.

Preceded by a Theatre School Summit involving top theatre educators and practitioners from across the country, the Globe Theatre School was launched in 2006 with year-round programs for school-aged children and young adults. Gradually it evolved to include a Globe on the Road theatre training and workshop program that extended the school's reach beyond Regina, a professional placement program for students in the theatre department at the University of Regina, and a four-month Actor Conservatory Training Program leading to a main stage production at the beginning of the season. The latter program provides a launching pad for students graduating from professional degree programs, and the school has more generally provided employment for local professionals as teachers and coaches. Although the school does not yet appear to have generated much revenue relative to expenses, a "Major Gift" campaign to raise $500 000 to underwrite the theatre school may change that.

In order to support this growth and development a series of renovations to the Prince Edward Building have taken place. Renovations worth $1.5 million, including the creation of the Templeton Studio, were completed in October 1999, but a further $1.65 million worth of renovations had to be undertaken in 2005/06 to expand rehearsal space, studios for the school and administrative offices. The unique arena-style configuration of the main stage theatre, however, has remained essentially unchanged.