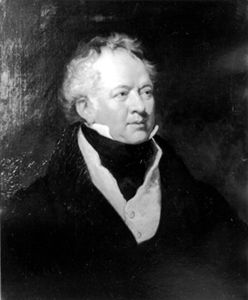 Gore was lieutenant-governor of Upper Canada 1806-17.

Francis Gore, colonial administrator (b at Blackheath [London], Eng 1769; d at Brighton, Eng 3 Nov 1852). The third lieutenant-governor of Upper Canada, he came to the colony after a brief career in the army and as lieutenant-governor of Bermuda. His first term (1806-11) was marred by bitter quarrels with Judge Robert Thorpe and Surveyor General Charles B. Wyatt, which ended in their suspension from office. He was absent on leave during the War of 1812. His second term (1815-17) closed with his prorogation of the Assembly, which had objected to his ban on the issuing of land patents to American immigrants, was impatient with delays in obtaining compensation for wartime damage to private property and was dissatisfied with his slow administration. Before that, he had got on well with the Assembly and had secured bills to build roads, reorganize the militia and found schools. He returned to England to become a deputy teller of the Exchequer.