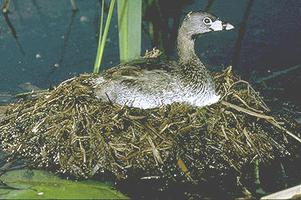 This is the grebe most often seen in Eastern Canada (Corel Professional Photos). 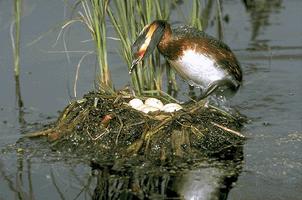 Unlike the eared grebe, which it closely resembles, the horned grebe does not nest in large colonies (Corel Professional Photos). 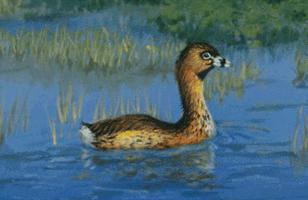 Grebe is the common name for members of the family Podicipedidae, aquatic birds with almost worldwide distribution. Grebes are generally thought to be most closely related to loons.

Twenty-two species are known, including the recently described hooded grebe (Podiceps gallardoi), discovered in 1974 in southern Argentina. Six species occur in Canada: pied-billed, horned, red-necked, eared, western and Clark's grebes (Podilymbus podiceps, Podiceps auritus, P. grisegena, P. nigricollis, Aechmophorus occidentalis and A. clarkii, respectively). The Canadian species nest from Nova Soctia and PEI to central BC, and north along the treeline to the Yukon and the Northwest Territories. Grebes migrate at night, wintering in salt water along both coasts of North America and also in fresh water in the US.

Grebes have pointed bills and very short tails. Adults are black, grey or reddish above, white below. Canadian grebes range in size from 287 g for the eared grebe to 1.5 kg for the western grebe.

Grebes use their feet and wings to propel themselves under water, where all species obtain most of their food. Their legs, lobed toes and nails are flattened for efficient use under water, but because the legs are set far back under the body, movement on land is difficult. Wings are small and flight inefficient; some species found outside Canada are flightless.

Grebes spend most of their lives in the water and build nests with aquatic vegetation. These nests float, anchored to emergent water plants, or are built up from the bottom of a pond or lake. They are usually surrounded by water plants, protecting them from waves and predators. Some species nest in large colonies; others are solitary, nesting as isolated pairs.

Courtship behaviour involves complex vocal and visual displays. In Canada clutches contain 3-7 eggs (range 1-10). Parents take turns incubating. Both adults care for the young, which leave the nest sometimes within minutes of hatching. Hatchlings ride on their parents' backs; after one or 2 weeks chicks swim by themselves.