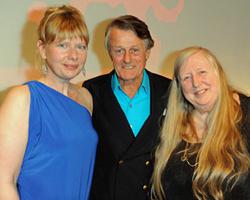 The Griffin Poetry Prize is the world's largest prize for a first edition single collection of poetry written in English. It is funded by the Griffin Trust For Excellence In Poetry, which aims to spark the public's imagination and raise awareness of the crucial role poetry plays in our cultural life.

The Griffin Trust was founded in April 2000 by chairman Scott Griffin, along with trustees Margaret Atwood, Robert Hass, Michael Ondaatje, Robin Robertson and David Young. In 2004 Carolyn Forché was named a trustee, joining the list of internationally-acclaimed writers who sit on the board of the Griffin Trust.

The Griffin Trust's support for poetry focuses on the annual Griffin Poetry Prize, which awards 2 literary prizes of $65 000 each and an additional $10 000 to each shortlisted poet who reads at the annual Griffin Poetry Prize Shortlist Readings in Toronto. A Canadian prize is given to a living poet resident in Canada; an international prize is given to a living poet from any country in the world. Both prizes may include works in translation. Judges are selected annually by the trustees and the prizes are awarded in the spring of each year.

The Griffin Poetry Prize is promoted through an evening of readings by the shortlisted poets, and by the marketing and advertising organized through the media, publishers and bookstores. Eligible collections of poetry are those published between January 1 and December 31 of any given year. Submissions are accepted from publishers only.

Matt Cohen Award: In Celebration of a Writing Life