Independent landowners who farmed properties in New France in the 17th and 18th centuries. They differed from hired agricultural labourers and temporary workers. By the end of the 18th century, the term habitant applied to all those who inhabited rural areas and made a living by working the land, even if they did not own it.

Independent landowners who farmed properties in New France in the 17th and 18th centuries. They differed from hired agricultural labourers and temporary workers. By the end of the 18th century, the term habitant applied to all those who inhabited rural areas and made a living by working the land, even if they did not own it. 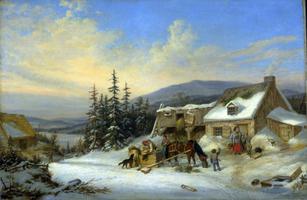 Cornelius Krieghoff, 1856, oil on canvas. This type of winter picturesque scene made him the most popular painter in Canada in his day (courtesy NGC).

In 17th- and 18th-century New France, habitants were independent landowners who established a homestead. Their status came with certain privileges and obligations. For example, during the colony’s early years, only habitants had the right to small-scale fur trading. Engagés (contracted immigrant workers), volunteers and soldiers were prohibited from trading. Habitants differed from hired agricultural labourers (domestiques) and temporary workers (plowmen, labourers and seasonal workers).

In New France, there were two ways to obtain land. In the colony’s early years, only the seigneur (a company or an individual) could grant a piece of land. In exchange for this grant, the censitaire (tenant) agreed to pay rent and interest known as cens and rentes (see Seigneurial System) to the seigneur. While the seigneur could reclaim the land (known as a censive) if it was not developed, the habitant could not regrant it. Because he had a clear title to the property, however, he could sell it to someone else. The seigneur had the right of redemption, so the habitant theoretically had to offer him the land first. The piece of land could then be sold or exchanged either by the habitant who was granted it or by his heirs.

The word rente referred not only to the annual fee the habitant paid the seigneur but also to the interest that a borrower owed a lender. Each year on a set date, the habitant had to pay the former landowner the rente (the interest) on the amount not paid during the initial transaction with the notary. Though the rente amounted to little by today’s standards, it often went unpaid year after year, and when the habitant died, his heirs had to cover both the balance and the accrued rentes. It was less common than one might think for the seigneur or the seller to seize property due to unpaid rentes. With some exceptions, 18th-century seigneurs, merchants and traders in the colony seemed reluctant to concentrate land in their hands. To increase the size of their holdings, “major” habitants — those who owned the largest farms — sometimes seized land belonging to their neighbours, to whom they had provided animals, workers or money. These affluent habitants often held positions such as militia captain or parish warden.

It is difficult to determine the habitants’ standard of living, which varied considerably. Posthumous inventories did not always include all the goods within a house. Clothes and other everyday objects might have been distributed before the notary took an inventory a few months or sometimes even years after the person’s death. The financial repercussions of paying the tithe and various seigneurial taxes differed (theoretically), depending on the size and age of the censive. Except in wartime or when colonial authorities requisitioned supplies, habitants could take their surpluses into town to sell, exchange them with merchants for other goods or keep them to provide for their families. Other factors affecting a household’s financial state included the distance to agricultural markets and the current stage in the family life cycle (newlyweds, families with adolescents, etc.).

Vocabulary associated with the habitants has changed over the years. At the end of the 18th century, the term habitant applied to all those who inhabited rural areas and made a living by working the land, even if they did not own it. In the 20th century, habitant took on a negative connotation and referred to someone who lacked the “fashionable” manners of urbanites.

The habitant is a recurring theme in the works of Québécois painters such as Cornelius Krieghoff, Horatio Walker and Clarence Gagnon. In the early 20th century, the habitant was a key figure in Québec’s efforts to promote tourism, highlighting the province’s rural life and historic character. Literature and tour guides helped spread the idea that rural populations lived a lifestyle similar to those of their ancestors in New France. These artistic and touristic representations made the habitant the archetypal figure of French Canada — an image that lasted until the Quiet Revolution (See Habitants and French-Speaking Quebec).