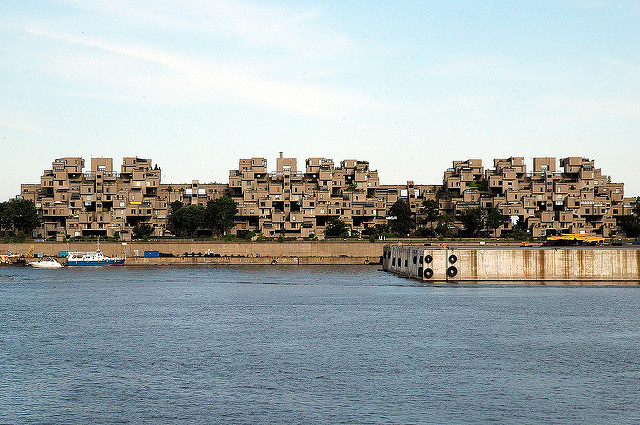 A view of Habitat 67 across from downtown Montreal.

The design of the complex stemmed directly from Moshe Safdie’s undergraduate research while an architecture student at McGill University. In a report he wrote in the summer of 1961, “A Case for City Living: A Three-Dimensional Modular Building System,” Safdie probed alternatives to suburban sprawl. He proposed rethinking urban habitat as an affordable, mass-produced dwelling that provided direct access, privacy and a garden on the roof of an adjacent unit for every resident. “For everyone a garden,” was Safdie’s famous catch phrase for the building’s driving philosophy.

In a 2014 TED Talk, Safdie said that his intent with Habitat was to “reinvent the apartment building.” Explaining his original vision, he said, “We can’t sustain suburbs, so let’s design a building which gives the qualities of a house to each unit. Habitat would be all about gardens, contact with nature, streets instead of corridors.”

In its built form, Habitat 67 is an iconic cluster of 354 interconnected, concrete boxes. Each box is about 600 sq. feet and weighs 90 tons. They are stepped and stacked in a slightly pyramidal structure rising 12 storeys. The dwellings of the Pueblo people in the Southwestern United States served as an inspiration, as did the Japanese architectural style known as Metabolism, which features interconnected, prefabricated cells.

Habitat employed several innovations. The complex was designed as a continuous, three-dimensional urban structure in which all module cubes are load-bearing. As ArchDaily’s Gili Merin wrote in 2013, “This ingenious method provided each apartment with a roof garden, a constant flow of fresh air and a maximum of natural light: qualities which were unprecedented for a 12-storey apartment complex. Habitat 67 thus pioneered the integration of two housing typologies — the suburban garden home and the economical high-rise apartment building.”

Typically, dwellings range from one-bedroom units (600 sq. feet) to four-bedroom units (1,800 sq. feet) spanning two levels. The complex ultimately housed 158 units — a mere fraction of the 1,000 originally planned by Safdie — which are variously configured to permit a variety of sizes and layouts. Serviced by three elevator cores, pedestrian streets on every fourth floor run the length of the complex and provide the main circulation paths from which residents gain access to their homes. The use of prefabricated components such as fibreglass bathroom units and pre-assembled kitchens are also noteworthy.

Moshe Safdie had the unique opportunity of building his student thesis for Expo 67 in Montréal (courtesy Canadian Tourism Commission).

The concrete modular boxes were constructed on-site in a reinforced steel cage. Each box was then placed on an assembly line to facilitate the installation of the windows and insulation, as well as the mechanical and electrical components. After the modular bathrooms and kitchens were installed, each box was hoisted by a crane and conjoined with other boxes by a system of post-tensioned cables.

The construction of Habitat was beset by problems from the beginning. The use of an on-site prefabrication factory to cast the concrete modular boxes was intended to keep production costs low. However, the project’s reduction in size and scope resulted in a sharp increase in the costs of production. The initial budget of $13.5 million — 50 per cent of which was financed by the federal government’s Canada Mortgage and Housing Corporation (CMHC), 37.5 per cent by the provincial government and 12.5 per cent by the municipal government — spiraled out of control. The complex took 30 months to complete.

When the CMHC began renting out the units in 1968, they did so at a high rate most ordinary people could not afford: an exorbitant $1,000 per month, though this was soon reduced to a still-pricey $450 per month. In addition, maintenance costs proved unusually high; the concrete was prone to water damage, resulting in mould that spread through the ventilation system. The automatic sprinkler systems that serviced the gardens also proved prohibitively expensive.

In 1986, the federal government sold Habitat to Gatineau businessman Pierre Heafey for $10 million; three weeks later, Heafey sold it to a consortium of tenants for $11.4 million. The units were rezoned from rental properties to private residencies and prices skyrocketed further.  At present, Habitat is a coveted residence of the cultural and political elite, with 148 sprawling, luxurious residential units.  Two units were listed in 2018 with an asking price between $1.3 million and $1.5 million  — more than four times the average price of a Montréal home. Maintenance fees, which include a shuttle bus to downtown Montréal, range from $1,200 to $1,500 a month. Safdie has spoken positively of the high cost of living at Habitat, saying, “That shows it’s desirable. To me, the gentrification of Habitat is the best thing that could have happened.”

The Québec government acknowledged Habitat as one of the most innovative and significant building projects of the 1960s when it bestowed it with heritage status in 2009. Since then, any proposed modifications to the structure have been tightly controlled. In 2017, Canada Post issued a commemorative stamp to mark the 50th anniversary of Habitat, and guided tours of the complex drew more than 4,000 people. Safdie has promised to donate his own Habitat unit, a tenth-floor residence comprising four modular boxes, as a permanent show home that would be open to the public. 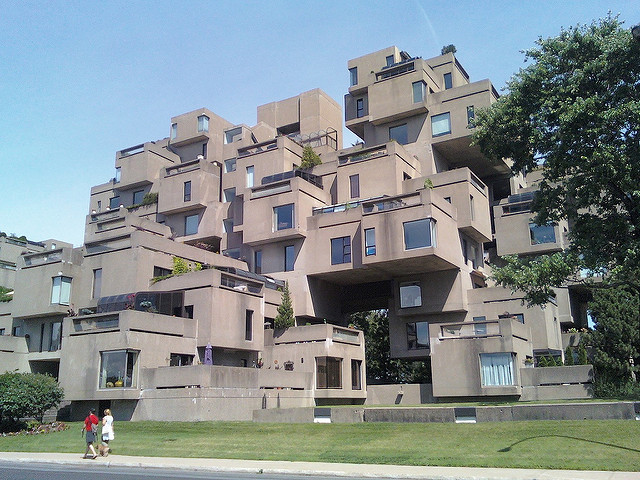 Despite the unfulfilled nature of these proposals, Habitat had a lasting influence on urban design and construction. Danish architectural firm Bjarke Ingels Group (BIG) cite it as the inspiration for their proposed condominium complex at King Street West and Portland Street in downtown Toronto. In a 2018 interview with the Globe and Mail, Cyril Moussard, a specialist in modular buildings in France, called Habitat “the benchmark in modular construction. Housing today is looking to return to the values, like urban density, green space and lots of light, that Habitat represents.” In 2015, the Guardian called Habitat “a functioning icon of 1960s utopianism, and one of that period’s most important buildings.”

However, there are also dissenting opinions on Habitat’s legacy. Calling Habitat a “failed dream,” TheWalrus’ Adele Weder wrote in 2008 that, “Canada’s first truly ideological government-sponsored architecture” failed to live up to its promise as a template for urban living and instead became a kind of monument to elitist inequality. The complex that was “launched as a manifesto for universal, affordable urban housing,” she wrote, “has now evolved into an enclave for the affluent… As a world fair spectacle or as architectural research, Habitat was terrific. As a pilot project, it was a bust.”