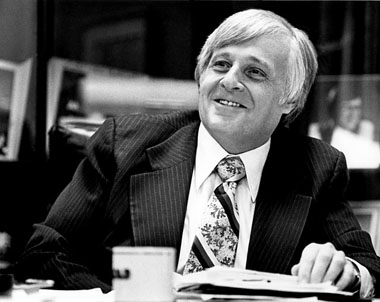 Former Chairman of the Board, Astral Communications, 1980.

Harold Greenberg, administrator, producer (b at Montréal, 11 Jan 1930; d there 1 July 1996). The path of Harold Greenberg's career took him from a second-hand camera shop which he entered at age thirteen, to Astral Communications where he worked as president and manager until his death.

The rise of Harold Greenberg truly began in 1967 when he acquired the exclusive rights to sell films on the site of EXPO 67 as well as photographic rights in the pavilions. In 1968 he became president of Pathé Humphries laboratories. Then, in 1973, he acquired Astral Films. He soon joined his companies under the banner of Astral Bellevue Pathé, then under that of Astral Communications in 1992.

In 1972 Greenberg launched into film production. He was executive producer for such feature films as Seizure (Oliver Stone, 1973), The Neptune Factor (Daniel Petrie, 1973), Breaking Point (Bob Clark, 1976), In Praise of Older Women (George Kaczender, 1978), and Porky's (Bob Clark, 1981). In 1982 he was deputy producer for Gilles Carle's Maria Chapdelaine. When Pay TV channels first appeared in Canada, Greenberg was first in line. However, his association with First Choice and Super Écran caused the CRTC to ban him from producing films. A businessman above all, Greenberg guided his company to develop its capacities in the sectors of videocassette production, post-production and film distribution. At the end of his life, he sought to exploit the potential of multimedia, in particular CD-ROM and computer animation.

Very much involved in community, he was an officer of the Order of Canada, Chevalier de la Légion d'Honneur, and Chevalier de l'Ordre National du Québec.