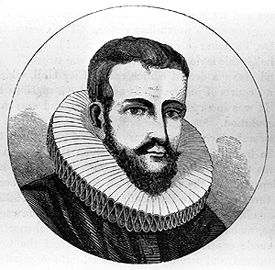 Hudson's discovery of a route to the continent's interior proved of inestimable value to England, woodcut (courtesy Library and Archives Canada/C-17727).

Little is known about Henry Hudson’s origins. He was probably born around 1570 and in his late thirties when he began making his known voyages in 1607. He may have been related to a number of men named Hudson (sometimes spelled Hoddesdon or Herdson) who were associated with the Muscovy Company, a London-based trading enterprise. He had a wife, Katherine, and three sons, Oliver, John and Richard. Together they lived in London’s St. Katherine district.

Henry Hudson (with his son John) made his first known voyage in 1607 in the Hopewell, with a crew of 12. The voyage was associated with Sir Thomas Smythe, a leading figure in the East India Company. It was an attempt to find a passage through the Arctic, over the North Pole, to Asia. At the time, Hudson and others thought that the long summer days of the high Arctic might create an ice-free zone at the top of the world. Hudson was able to sail above Spitsbergen, one of the islands of Svalbard, an archipelago between Norway and the North Pole. This placed him beyond latitude 80° north, a record-setting effort, but the cold reality of Arctic ice made further progress impossible.

On the way home Hudson sailed about 800 km off course and in the process sighted a volcanic speck of rock north of Iceland that became known as Hudson’s Tutches. English whalers subsequently called it Trinity Island, while Dutch whalers gave the landfall its enduring name, Jan Mayen island. Hudson was probably trying to gather additional information on the feasibility of the Northwest Passage, which would lead to Asia through what is now the Canadian Arctic, as his course was taking him towards southern Greenland. Although he failed to reach Asia, Hudson’s exploration in and around Spitsbergen led to a new whale and walrus fishery.

In 1608, Hudson sailed again in the Hopewell, again in association with Sir Thomas Smythe, but now with the aim of finding the Northeast Passage, a route to East Asia over the top of Russia. Hudson and his crew of 14 were unable to progress beyond Novaya Zemlya, an archipelago in the Arctic Ocean. The voyage was otherwise noteworthy for a remark in Hudson’s journal that crewmembers had sighted a pair of mermaids: one was “as big as one of us; her skin very white; and long hair hanging down behind, of colour black; in her going down they saw her tail, which was like the tail of a porpoise, and speckled like a mackerel.”

For his third voyage Hudson was hired by the Dutch East India Company (VOC) to make another attempt at finding the Northeast Passage. He was provided a small, nimble vessel called the Halve Maen (Half Moon).

Hudson and the Half Moon, with a total crew of 17 (13 of them Dutch) left Amsterdam in April. He was no more successful in overcoming Novaya Zemlya than he had been with the Hopewell in 1608. Despite explicit instructions from the VOC to return home should he not find the Northeast Passage, Hudson made an extraordinary detour — all the way across the Atlantic Ocean, to the east coast of North America.

Hudson’s motivations are unclear. He may have made off with the Half Moon in hope of making a major discovery that could land another voyage commission. After crossing the Grand Banks, Newfoundland, Hudson had a dangerously close encounter with Sable Island before stopping at present-day LaHave, Nova Scotia, to replace a broken mast. There, Hudson met friendly Mi’kmaq, but after a few days a rift erupted between the English minority and the Dutch majority of his crew. A dozen heavily armed men, who were probably the Dutch faction, went ashore and “drove the savages from their houses,” according to crewmember Robert Juet’s journal. The Half Moon crew’s aggression may explain why in 1611 the Mi’kmaq took captive six men from a Dutch voyage that anchored at LaHave. None were ever seen again.

Hudson continued south to Cape Cod, Massachusetts, and then briefly into Chesapeake Bay (an inlet between Maryland and Virginia), before turning north. He inspected Delaware Bay (between Delaware and New Jersey) before arriving at Upper New York Bay and the island of Manhattan. Upon entering Upper New York Bay he followed north the river that now bears his name. He probed 240 km of navigable water, all the way to present-day Albany, New York, before turning back.

Instead of returning to Amsterdam, Hudson sailed back across the Atlantic to the English port of Dartmouth. There he secured new backing for an English attempt at finding the Northwest Passage, and in July 1610 the Half Moon returned to Amsterdam without him.

For his fourth voyage, Hudson was backed by a wealthy and influential group of men, including the Prince of Wales, and provided with the Discovery. The Discovery left London on 17 April 1610 with a crew of 23, among them Hudson’s son, John, and Robert Juet, who had been with him since at least his second voyage in 1608. Before he had even reached the sea, Hudson brought aboard another man, Henry Greene, to serve as a spy on the crew.

Provided with only a single ship and no messenger vessel, Hudson likely had only been expected to make a preliminary, one-season search for the Northwest Passage. But he sailed all the way across the strait named for him before turning south into a massive expanse of open water that also would bear his name. From Hudson Bay he probed still farther south, into James Bay, in which he sailed back and forth, “for some reasons to himself known,” according to one crewmember. In September, Hudson held an ad hoc trial of his mate, Juet, to air allegations that he was plotting to seize control. Hudson spared him from punishment, but replaced him as mate with Robert Bylot.

The voyage paused for the winter at the southern end of James Bay, probably in Rupert Bay. Remarkably, the Discovery crew endured the winter with the loss of only one man, but Hudson had a serious falling out with his shipboard spy, Henry Greene. In June 1611, after returning from a reconnoitering expedition in the ship’s boat, Hudson agreed to sail back to England. Before leaving, though, he replaced Bylot as his mate with another sailor, John King. The Discovery was stalled in ice on James Bay when a faction of the crew that included Juet, Greene and Bylot seized control of the ship on the morning of 22 June. Hudson, his son John, and seven other crewmembers (including King) were forced into the ship’s boat and cast adrift. They were never seen again.

Five mutineers died on the return voyage. Four, including Greene, were killed in a clash with Inuit at Digges Islands at the northern end of Hudson Bay; Juet died of starvation only days before the ship reached the British Isles. When the battered Discovery drifted into the company of a fishing fleet off the south coast of Ireland on 6 September, the original crew of 23 was down to eight.

Hudson’s third and fourth voyages ignited a flurry of exploration and trading activity. The Half Moon voyage led to fur trading opportunities for the Dutch. Dutch merchants were in the Manhattan area by 1612, and the colony of New Netherland was soon formed.

The French explorer Samuel de Champlain was told by a translator, Nicolas de Vignau, that Anishinaabe people at Lake Nipissing had secured an English boy from the Cree, the lone survivor of a wreck in the “northern sea” (Hudson Bay), and wanted to make a gift of him. The boy sounded like John Hudson and inspired Champlain to mount his 1613 journey up the Ottawa River. While the information Vignau provided was likely false, the failed 1613 journey led to Champlain’s more ambitious 1615–16 visit to Georgian Bay and the Huron-Wendat people.

Hudson’s explorations on the fourth voyage also inspired immediate follow-up voyages by the English in search of the Northwest Passage. Three survivors, Robert Bylot, Habakkuk (Abacuk) Prickett and Edward Wilson, participated in a 1612–13 voyage into Hudson Bay under Thomas Button. With William Baffin, Bylot made two significant voyages into the Canadian Arctic. Only after the final Baffin-Bylot voyage failed to locate the passage did Bylot and other survivors of the 1610–11 Discovery voyage stand trial for the murders of Henry and John Hudson and their companions. All were found not guilty in 1618.