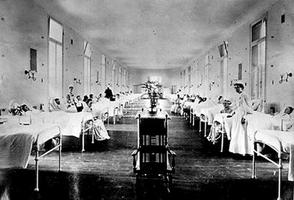 Canada has several types of hospital, including general public (706) and special public (193), both of which are under provincial jurisdiction. As well, there are 45 private hospitals and the federal government operates 1. "Public special hospitals" refers to facilities such as rehabilitation hospitals, cancer centres and chronic care facilities. Private hospitals include cosmetic surgery facilities and vision centres.

The first HÔTEL-DIEU in New France was established in 1639 by 3 sisters of Augustines de la Miséricorde de Jésus in Québec City. This hospital is still in operation. By 1694, 3 other religious hospitals had been constructed, including the Hôtel-Dieu in Montréal, and in 1819 and 1829, respectively, general hospitals were opened in Montréal and York [Toronto]. The York hospital had been built several years earlier but had been used as a temporary home for the government after Upper Canada's parliament buildings burned down in December 1824.

The first general hospitals were charitable institutions, relying on donations from benevolent organizations and prosperous citizens. The patients paid very little, if anything, and government support was erratic and undependable. In 1867 the Toronto General closed for a year because of lack of funds, and it was partly because of this that the Ontario government passed an Act in the early 1870s providing for annual grants to the hospital and to other charitable institutions. Today nearly all hospital operating revenues come from federal and provincial governments.

Until the early part of the 20th century, hospitals were generally devoted to the treatment of the poor, who suffered in particular from infectious and nutritional diseases, eg, influenza, pneumonia, tuberculosis, gastroenteritis and scurvy. Because the relationship between public sanitation and personal hygiene and disease was largely unknown, and because of the lack of therapeutic drugs, infectious diseases spread uncontrollably. Dirty and overcrowded hospitals were often traps for infection, and most prosperous citizens, who were treated at home, avoided them.

This situation persisted throughout the early 1900s when tuberculosis hospitals were established to sequester the "incurables" from the general public. "Feebleminded" individuals were dealt with in a similar way and mental hospitals began to expand in both number and size. Between WWI and WWII, however, and before the advent of antibiotics or vaccination programs became widespread, infectious-disease mortality rates began to decrease as a result of enforced PUBLIC HEALTH measures.

By the 1880s, the introduction of safe anesthesia, asepsis (ie, prevention of infection) and of improved surgical techniques led to decreased mortality from conditions such as postoperative hemorrhage and gastrointestinal abnormalities (see MEDICINE, HISTORY OF). Because these techniques required sophisticated equipment, specially trained personnel and longer periods of observation, the use of hospital facilities increased, and hospitals became centres for curative therapy, for teaching and for MEDICAL EDUCATION and research.

In 1945 the federal government submitted recommendations for changes to the health-care system in Canada to the Dominion-Provincial Conference on Reconstruction. The recommendations proposed a series of grants and low-interest loans to the provinces to improve existing health services and to construct new hospitals. Because the conference representatives failed to reach agreement, the proposals were left in abeyance, but in 1948 the plans were resurrected in the National Health Grant Program. Funds granted to the provinces were to be used to construct new general and mental hospitals, to strengthen public health services, and to develop programs for specific diseases, eg, tuberculosis and SEXUALLY TRANSMITTED DISEASES, and for specific patients, eg, crippled children.

In 1958, following the lead of Saskatchewan, the federal government passed the Hospital Insurance and Diagnostic Services Act, which empowered it to negotiate agreements with each province to share the cost of provincially administered insurance programs providing for the payment of the basic cost of acute treatment, and for convalescent and chronic care in approved hospital facilities. These hospitals were guaranteed reimbursement for services rendered. By 1961, all provinces were providing federally assisted hospital insurance (see HEALTH POLICY).

In 1961 the federal government established the Royal Commission on Health Services to investigate the health-services system and to recommend measures to "ensure that the best possible health care is available to all Canadians." The commission's final report (1964) became the cornerstone of Canada's health-care system.

Both the Health Grant Program and the Hospital Insurance Act encouraged a reliance on hospital care and diagnostic service - the most expensive elements of any health-care delivery system. In response to these rising health-care costs and the royal commission recommendations, the federal government passed the Medical Care Act in 1967 empowering it to share the cost of medical insurance plans in each province. Within 3 years, all provinces had such plans; the combination of national hospital and medical insurance is called medicare.

In 1966 the federal government established the Health Resources Fund under which $500 million was granted to the provinces to plan, build and renovate facilities to be used to train health professionals or conduct research. The money was distributed over a 14-year period ending in 1980; $400 million of this fund was used to build new facilities or renovate old ones. The remaining funds were used to replace outdated equipment.

These considerations led to the 1977 Federal-Provincial Established Programs Financing Act (EPF). Through a complex combination of cash grants and tax transfers that differ for each province, the federal government pays for part of the cost of provincially administered hospital and medical insurance plans, but does not automatically match provincial expenditures. In response, provinces have introduced innovations, eg, home care, day surgery, and outpatient care. All indications are that the federal government's strategy has halted the rise in hospital expenditures, though total health expenditures continue to grow.

A new Canada Health Act, which combines the 2 previous Acts (hospital insurance and medical insurance), went into effect in April 1984.

Figures for 1997 indicate that health and hospital costs accounted for 9.2% of Canada's Gross Domestic Product. Between 1993 and 1996, the health-to-GDP ratio has fallen each year, but is expected to increase slightly in the future. According to the Organization for Economic Cooperation and Development (OECD), Canada's health-to-GDP ratio ranks 4th among the Group of 7 industrialized nations, behind the US, Germany and France.

In 1996, the last year for which there are confirmed figures, Canada spent $75.3 billion on health care, an average of $2513 per person in the country. This figure reflects both public and private spending. Private health spending includes third-party insurers and out-of-pocket expenses by Canadians, which are mainly drugs, dental services and vision care. Public sector spending totalled $52.9 billion (70.3% of the total) and private spending amounted to $22.4 billion (29.7% of the total). Hospitals account for the largest share of health expenditure, with physician services the second-highest expense and drugs the third. Hospital expenditure was $25.9 billion (34.3% of the total), while physician services were $10.7 billion (14.3% of the total). Prescription and nonprescription drugs cost Canadians $10.2 billion (13.6% of the total).

Health care spending per capita is higher in the territories than in the provinces, due partly to the high cost of providing government programs in large geographic areas with a small population base. In 1996, BC and Ontario spent the most per person, at $2728 and $2624 respectively, in public and private money. In Manitoba, per capita spending amounted to $2579 and in Saskatchewan $2477. Health care in PEI cost $2466 per person, in Alberta $2380 and in Québec $2309. Nova Scotia spent $2274 per person and Newfoundland $2267.

Most hospitals are given an annual inflation-adjusted global budget by the provincial government. With these resources hospitals provide surgical suites, nursing care and a wide range of diagnostic, therapeutic and rehabilitative services. Hospitals feed and house the inpatients, offer numerous community, outpatient and emergency services, and provide training programs for health-care professionals. They also undertake research projects. Hospitals not only train new physicians, nurses and other health-care personnel, but they are committed to educating patients in the maintenance of health and in coping with disabilities.

Hospital personnel includes technologists, therapists and administrative staff. Although physicians powerfully influence the operation of hospitals, very few are hospital employees. Except in the rare cases of laboratory and emergency-room specialists, and some senior professional staff in teaching hospitals, physicians do not receive payment from hospitals, although only physicians can admit patients to a hospital (patients cannot admit themselves).

Physicians have complete authority to order surgery, drugs, diagnostic and therapeutic service, and nursing services for their patients. They are also the only health-care professionals qualified to discharge a patient from hospital (patients can discharge themselves but usually do not do so). Nurses, on the other hand, are hospital employees and are responsible for delivering most of the patient care in hospitals. In 1997 there were 229 813 registered in Canada. Of this figure, 117 616 were full-time nurses and 108 614 were part-time (3583 were not stated). There were 55 243 physicians, or 183 per 100 000 people. Of these, 28 108 were general practitioners (93 per 100 000 population) and 27 135 were specialists (90 per 100 000 population).

Patients in hospital are usually described by their age and sex, or by their illness. By age and sex, the largest users of hospital services are the elderly (people over 65 make up about 10% of the population and are responsible for about 50% of Canada's patient days) and women in their child-bearing years. By illness, the major cause of hospital use is HEART DISEASE.

A number of factors are changing the way in which health-care services are being delivered, eg, population AGING, increase in chronic illness, advance in medical technology and reduced government funding due to increasing demands on provincial governments to reduce debt loads. Hospitals of the future will need to continue to provide a variety of services in one facility, share facilities and yet meet an opposing demand for more personal, generalist care for patients with chronic conditions. Most likely there will be a greater emphasis on community services and on outpatient and home care.