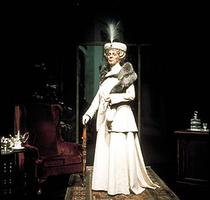 William Ian deWitt Hutt, actor, theatre director (b at Toronto 2 May 1920, d at Stratford, Ont 27 June 2007). William Hutt began acting at Vaughan Road and North Toronto collegiates but enlisted in the army without completing his high school education. He served 5 years in WORLD WAR II with the 7th Canadian Light Field Ambulance, winning the Military Medal in 1944 for "bravery in the field" during the Italian campaign. From his novice days at Hart House Theatre and with Trinity College, University of Toronto, he launched his professional career in 1948 in summer stock, going on to become leading man and associate director of Ottawa's Canadian Repertory Theatre (1951-52).

Hutt joined the STRATFORD FESTIVAL in its inaugural 1953 season and was the first to win the Tyrone GUTHRIE Award the following summer. Since then, he was almost continuously associated with the festival as an actor, director and associate director, touring with it to the Edinburgh Festival (1956), Chichester (1964), throughout Europe and Russia (1973) and to Australia (1974). He was the first Stratford actor to direct at the festival, and his 8 productions included such challenges as Waiting for Godot (1968), As You Like It (1972) and Bernard Shaw's Saint Joan (1975). However, he is best remembered as Canada's foremost classical actor.

Hutt was an actor of prodigious versatility, with a superb voice, impeccable timing and a knockabout sense of the ridiculous to offset his urbanity. He played nearly every great role in the Shakespearean canon, including 4 King Lears and 4 Prosperos, as well as the title roles in such classical masterpieces as Volpone, Tartuffe, The Imaginary Invalid, Richard II and Uncle Vanya, to name but a few. In 1975 he astounded Stratford audiences with the veracity of his comic interpretation of Lady Bracknell in The Importance of Being Earnest.

Hutt was versatile and productive in the theatrical world. He toured North America in the 1950s and 1960s with the Canadian Players and briefly with Noël Coward's Sail Away. In England he played with the Bristol Old Vic (1959), on London's West End in Coward's Waiting in the Wings (1960), as Tsar Nicholas II in the MGM film The Fixer (1967) and at the Thorndike Theatre in Surrey as Caesar in Shaw's Caesar and Cleopatra (1969). His New York appearances include the Stratford production of Tamburlaine (1956), Edward Albee's Tiny Alice (1964) and Warwick in Saint Joan at the Lincoln Center (1968).

Appointed an associate director of Stratford in 1969-70, his 10 productions there ranged from Waiting for Godot (1968) to A Month in the Country (1973) and Saint Joan (1975). From 1976 to 1979 he served as artistic director of Theatre London (Ontario), overseeing the rebuilding of the GRAND THEATRE. During the early 1980s he stayed on to headline Robin PHILLIPS's Grand Theatre Company in London as Timon of Athens, Claudius in Hamlet and Abby Brewster in Arsenic and Old Lace. For the VANCOUVER PLAYHOUSE he starred in The Dresser (1982), the one-man show Darrow (1985), Masterclass (1987) and as Sir Thomas More in A Man for All Seasons (1984), a role he repeated in 1986 at Stratford and the NATIONAL ARTS CENTRE in Ottawa. Between 1989 and 1992 he appeared with the SHAW FESTIVAL, most notably in The Waltz of the Toreadors and Trelawny of the 'Wells'. When Martha HENRY assumed leadership of the Grand Theatre, Hutt returned to play in The Man Who Came to Dinner (1988), Road to Mecca (1990), The Dining Room (1992) and Timothy FINDLEY's The Stillborn Lover (1993), a drama written for Henry and Hutt. They were reunited in 1995 in the Findley play at Stratford - the festival's gift to Hutt on his 75th birthday.

In 1997 Hutt played - to great acclaim - the role of James Tyrone in the film adaptation of Eugene O'Neill's Long Day's Journey into Night, winning a GENIE AWARD. In 1998 he helped to celebrate Stratford's 45th season in New York playing Leonato in Much Ado about Nothing and the title role in Molière's The Miser. In 2000 he directed Maxim Mazumdar's Oscar Remembered for Stratford at the Tom PATTERSON theatre. In 2001 Hutt played the smaller role of the King of France in All's Well That Ends Well before Albert SCHULTZ wooed him to Toronto to appear with SOULPEPPER THEATRE, first as Spooner in Harold Pinter's No Man's Land (2003) and then as Vladimir in Waiting for Godot (2004).

Hutt was the recipient of many honours and awards. He won the Centennial Medal in 1967 and was made a Companion of the ORDER OF CANADA in 1969. In 1975 he won ACTRA and Canadian Film awards for his portrayal of a tipsy Sir John A. Macdonald in CBC's telecast of Pierre BERTON's The National Dream. In 1992 he was honoured with both the ORDER OF ONTARIO and the Governor General's first Award for Lifetime Achievement in the Canadian Theatre. He held honorary doctorates from the universities of Guelph, Western Ontario, Ottawa and McMaster. In 1996 he received Britain's Sam Wannamaker Award for his outstanding contributions to the world of Elizabethan and Jacobean theatre. In 1997 the CBC saluted him with Harry Rasky's television portrait, William Hutt: A Fortunate Man. In 2000 the City of Stratford rechristened the Waterloo Bridge, alongside his home, the William Hutt Bridge.

In 2005 Richard MONETTE invited him back to Stratford for his fourth and final appearance as Prospero in The Tempest. With the exception of his TV appearances as an ageing, drug-addicted actor in the Slings and Arrows series, that Stratford engagement was Hutt's farewell performance, immortalized for all who saw it by his final wave goodbye to the audience. A memorial photograph of this moment graced the program at his funeral. As Robin Phillips said on this occasion, "Bill Hutt was Canada's first great classical actor."