In Conversation with Lindsay Mattick

In the summer of 2015, special projects editor Eli Yarhi interviewed Lindsay Mattick, a public-relations professional and the author behind the children’s book Finding Winnie: The True Story of the World's Most Famous Bear (2015), for The Canadian Encyclopedia. Mattick is a great-granddaughter of Lieutenant Harry Colebourn.

As he shipped off to the First World War in 1914, Colebourn purchased a female black bear cub from a hunter in White River, Ontario. He named her Winnie for his hometown (Winnipeg), and cared for her in Valcartier, Québec, where the Canadian army organized its infantry brigades, before bringing her to Salisbury Plain, England, where Canadian soldiers trained for combat. But when his services with the Canadian Army Veterinary Corps were needed on the front, Colebourn brought Winnie to the London Zoo for safekeeping. There, her good nature captivated the imagination of many visitors, including author A.A. Milne and his son, Christopher Robin.

Lindsay Mattick: My name is Lindsay Mattick, and my day job is in public relations. I'm the vice president of strategy and creative at a Toronto shop called Narrative, and I'm also the author of a book that’s coming out this fall called Finding Winnie, which is about my family’s connection to Winnie-the-Pooh. 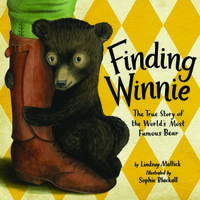 Eli Yarhi: And what is that connection?

My great-grandfather Harry Colebourn was a veterinarian. He emigrated from Britain to Canada when he was 18, loved animals, went to the Ontario Veterinary College to become a vet, and then, when the First World War broke out in 1914, he enlisted with a Winnipeg regiment, the Fort Garry Horse, and his responsibilities in the war were to look after the cavalry. And he travelled from Winnipeg, through White River, to Valcartier, where he trained as part of the 2nd Canadian Infantry Brigade.

While he was in White River, he stopped at a train station and there was a hunter there who had killed a bear, and he was selling the cub for $20. And my great-grandfather, obviously loving animals, bought this little bear to be kind of a mascot for his regiment. He named the bear Winnipeg, Winnie for short, in homage to his adopted Canadian city, and took Winnie on the train. 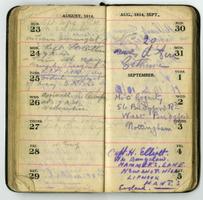 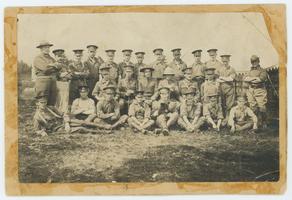 So, you know, you’re off to war. You stop at a train station. You make this decision to buy a bear, and then what follows? You know? How do you train the bear? What do you bring as food when you’re going on… This is not a short trip. This is a train ride. This is then army camps. Then it’s a ship across the Atlantic. So it’s no small feat to have done this.

EY: What are some family stories about Harry?

LM: Harry’s only son, my grandfather, Fred, passed away long after my great-grandmother, Harry’s wife, passed away. So it’s been a little bit of a patchwork mission trying to find people who really had those kind of personal anecdotes about what he was like as a person. My mother never met him, her sisters never met him — so finding those pieces has been challenging.

Hearing that he would look after people’s animals when they couldn’t afford to pay him, to me, says a lot about his character. I think the fact that he chose to buy a bear — there’s a certain audacity in doing that. It’s a little bit of a bold thing. While it was done, it certainly wasn’t done by everybody, and I think there’s an inherent optimism in that. He was obviously going off to a war. He was young. He had no idea what he was about to face, but he clearly thought, in buying this bear, that would be a source of joy for himself, for his fellow soldiers.

I know that he was gassed in the war, [1] and I know that after he came back, there were always some health issues associated with that. So I get the sense from some of the things that I’ve heard that the war certainly affected him a great deal, but beyond that it’s a little bit of a mystery — I would love to have more of those personal anecdotes about who he was. 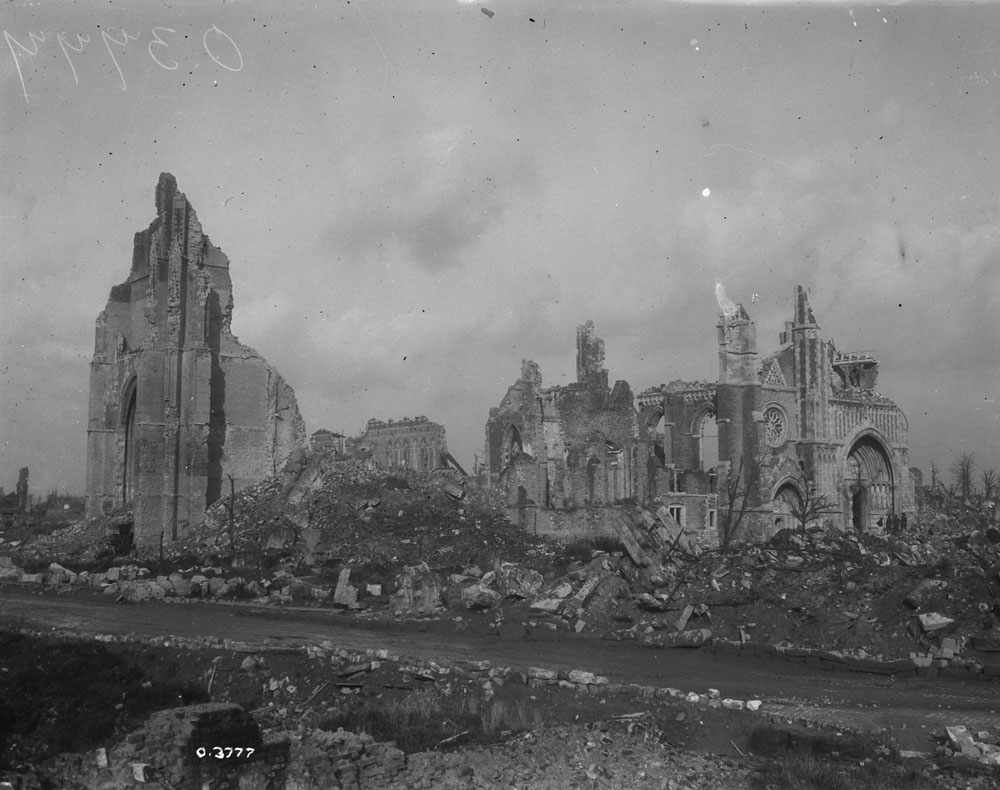 EY: Who was Winnie the bear?

Winnie lived a very long time for a bear, as I understand it. She was about 20 years old when she died. There were obituaries that were written about Winnie when she passed away, in 1934, I believe. From what I’ve read from those obituaries and also from accounts from some of the zookeepers at the time, they say that she was the only bear that they ever trusted entirely with children, which seems like a little bit of a crazy statement. I mean, the only bear you trusted entirely? Like, it says a lot about the time period and the fact that children were actually allowed — Christopher Robin was allowed — to go in and ride on Winnie’s back in her enclosure.

So I certainly don’t think that the nature of bears has changed over the last hundred years. I do think that my great-grandfather obviously was very good with animals, and she was clearly very well trained and very docile. The fact that children were able to have those incredible intimate experiences says a lot about her character. Certainly, she did have a very unique nature that was recognized by both the zoo and obviously my great-grandfather.

EY: How did we get the Winnie-the-Pooh stories?

LM: My great-grandfather realized in the fall of 1914 as he was getting ready to depart and head to France to the front lines that it was clearly no longer safe to have a little bear with him. At that point, he realized he would need to find Winnie a new home. So he, as I understand it, borrowed a car from a fellow officer. So Winnie was actually driven from the Salisbury Plain right to the London Zoo, where they had agreed to keep her in their care, until the war was over. Harry truly did intend to bring her home once the war was finished, but history had another plan in mind.

A.A. Milne, the author, and his son, Christopher Robin, used to go to the zoo all the time. And while Christopher Robin was there, I think in his experience with Winnie, and she being this very unique and friendly bear that he had this very personal and intimate connection with, he ended up naming his stuffed bear after Winnie. So his bear was called Winnie the Pooh. And I understand that the Pooh part of the story is actually that there was also a swan that Christopher Robin was quite fond of, and every time the feathers would fall out of the swan, he would blow off the feathers and go, “pooh, pooh.” [2]

At any rate, Christopher Robin named his bear Winnie and then, as A.A. Milne began writing these stories all about these adventures of Christopher Robin’s stuffed animals in the Hundred Acre Wood behind their home, [3] obviously he borrowed the name Winnie for his central character in the Winnie-the-Pooh stories.

EY: Was Harry aware of his connection to the books when they came out?

We don’t entirely know. Nobody has really been able to definitively answer that question. Harry died in 1947, just less than 20 years after the books were published. [4] Now I know the books became popular while he was alive, but the extent to which he understood just how far and wide these books were read and translated, I don't know.

EY: What was Fred’s role in publicizing his father’s connection to the books?

The first story came out in the Calgary Herald, and a cousin of my grandfather’s had read it. And Winnie was attributed to I believe it was the Princess Patricia regiment [see Princess Patricia’s Canadian Light Infantry]. And at that point, my grandfather, I believe, contacted the Calgary Herald. And then I think there was almost a little bit of, well, you know, “Prove it,” because there had been a plaque at the London Zoo that verified that story — that actually said that Winnie was the mascot of the Princess Patricia regiment. And that plaque had to be corrected. It was at that point that he really needed to pull out the diaries, pull out the photographs and really prove the story. Once that happened, it was a snowball. He was getting phone calls from the BBC — it just became an international story that really took on a life of its own.

EY: Why is this story still relevant?

Every so often, you become aware that a fictional story has an equally beautiful, real and true story behind it — and that doesn’t happen every day. I think that the part of this story that always spoke the most to me was the fact that when Harry made that decision [over] 100 years ago to buy Winnie, to buy a bear cub because he loved animals and because he felt it would bring some joy to his regiment, he just had no idea that this very simple act was going to have this massive unexpected ripple effect.

That’s why we named our son, Cole, after Harry Colebourn, to remind him that you never know the impact one small, loving gesture can have.

My background is journalism, I'm in PR, and I wanted to explore the story in a way that was appropriate for me. And I think writing the story through a picture book helps bring it to a larger audience and bring it to a lot of children who aren’t familiar with this story — that’s my role in the family story.

And I'm curious to see, you know, what will Cole’s role be in continuing to tell the story?

[1] Colebourn was stationed near Ypres (see Second Battle of Ypres) and described what he saw in his journal: “Ypres: Town is being shelled to pieces. Many men & horses killed. Shell bursts almost at my feet. Germans gas French soldiers who retreat en-mass. Hundreds of civilians & soldiers streaming down road out of Ypres. Old men carrying their wife on their back. Terrible scenes. Canadian soldiers hold on grimly against great odds.” 22 April 1915

[2] A.A. Milne described a possible origin for the “pooh” in the poem “The Mirror” in When We Were Very Young: "Christopher Robin, who feeds this swan in the mornings, has given him the name of 'Pooh.' This is a very fine name for a swan, because, if you call him and he doesn't come (which is a thing swans are good at), then you can pretend that you were just saying 'Pooh!' to show him how little you wanted him."

In Conversation with Marcia McClung