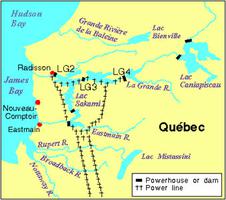 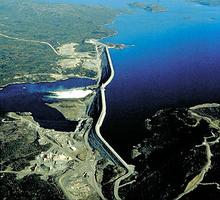 Phase I of the project cost $13.7 billion and entailed massive diversions of water from the Eastmain, Opinaca and Caniapiscau rivers to dammed reservoirs on La Grande Rivière, increasing the average flow of La Grande Rivière from 1,700 to 3,300 m3/s. A tiered spillway, three times the height of Niagara Falls, was blasted from the bedrock. La Grande-2 (LG-2) power station, now known as the Robert-Bourassa, was completed in 1982 and remains North America’s largest power-generating site, measuring 483 m in length and with the capacity to produce 7,722 megawatts of electric power. The completion of LG-3 and LG-4, in February 1984 and May 1984 respectively, ended Phase I of the project.

The James Bay Project raised controversy for its effects on Indigenous communities in the area and on the environment. It flooded 11,500 km2 of wilderness land that was home to the James Bay Cree and Inuit. The flooding also created mercury contamination in fish, as mercury was released from rotting vegetation in the reservoirs, and contributed to the deaths of an estimated 10,000 caribou. When the project was announced by Québec Premier Robert Bourassa, it was contested by the Cree, who had not been notified. The dispute culminated in 1975, with the James Bay and Northern Québec Agreement. In the agreement the Cree surrendered their land claims for $225 million, retaining special hunting and fishing rights. The village of Fort George (population 2,373) at the mouth of La Grande Rivière was uprooted and relocated upstream. It is now called Chisasibi. Eastmain (population 356) now lies in a saltwater estuary, as Rivière Eastmain was reduced to a trickle. Vast areas of wilderness were inundated and forests incinerated in an attempt to clear debris.

Phase II of the project began in 1989 with the development of LG-1 at the mouth of La Grande Rivière, where it empties into James Bay. James Bay II consists of the Grande Baleine (Great Whale) Complex and other dams on the Great Whale, Nottaway and Rupert rivers. Opposition to this phase of the project by the Cree was more vehement than it had been to Phase I. Their resistance played out in court battles with the government, as well as lobbying efforts south of the Canadian border, given that power from James Bay II was slated to be sold to the states of New York, New Hampshire, Maine and Vermont. For years, Cree activists lobbied American legislatures to stop participating in the James Bay projects. Eventually, they were successful: in 1992, then-governor of New York, Mario Cuomo, directed the New York Power Authority to cancel its contract with Hydro-Québec in favour of energy conservation and to purchase power from other sources. Due to the lack of a market for its hydropower, completion of the Great Whale Complex was suspended indefinitely.

Together, James Bay I and II diverted and dammed nine free-flowing rivers and flooded an area the size of Belgium.

In 2002, the Cree and the Québec government signed another agreement, called the Paix des Braves. The agreement builds on the James Bay and Northern Québec Agreement, and stipulates that the Cree and the government should jointly manage Cree lands, as well as share revenues generated from mining, forestry and hydroelectric resources. An agreement reached in 2004 set into motion the diversion of one of Québec's largest rivers, the Rupert River, in a $4 billion project. 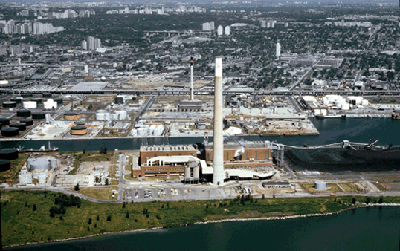