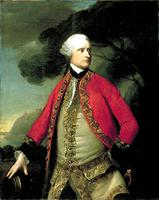 Portrait of General James Murray by an unkown artist, circa 1770-80, oil on canvas. The Englsih merchants had Murray, the first governor of the Province of Québec, recalled. The dispute centered on the application of British law and the creation of an Assembly (courtesy National Portrait Gallery).

James Murray, military officer, colonial administrator, first British governor of Québec (b at Ballencrieff, Scot 21 Jan 1721/22; d at Beauport House, near Battle, Eng 18 June 1794). Murray commanded a battalion in the siege of LOUISBOURG in 1758, and was one of James WOLFE's 3 brigadiers at Québec. After the Battle of the PLAINS OF ABRAHAM he remained in command of the city, facing undefeated French forces up the St Lawrence River. In April 1760 the Duc de LÉVIS advanced on Québec. Murray's garrison, weakened by disease, attacked near Ste-Foy, but was driven back into the city and besieged until British warships arrived (see Battle of Sainte-Foy). In October 1760 Murray was appointed military governor of the District of Québec and in November 1763 governor of the province. He was sworn in as the first civil governor 10 August 1764. A member of the landed gentry, he supported the agrarian, French-speaking inhabitants over the newly arrived, English-speaking merchants. He was reluctant to call a legislative assembly, promised in the ROYAL PROCLAMATION OF 1763, because he feared that Canadians would be barred from it on religious grounds.

His willingness to allow French law and custom in the courts further alienated the merchants and led to his recall in April 1766 and he left Canada in June. Though charges were dismissed, he did not return to Canada though he retained nominal governorship until April 1768. Nevertheless, his administrative arrangements for government were institutionalized in the QUEBEC ACT and were a factor in preventing Québec from becoming the 14th rebellious colony. From 1774 to 1782 Murray was lieutenant-governor and later governor of Minorca, where he directed a spirited, though unsuccessful, defence against a Franco-Spanish besieging force.