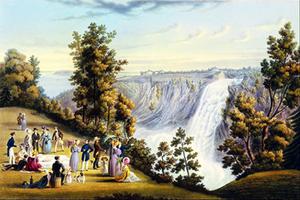 James Pattison Cockburn, soldier, topographic painter (b at Woolwich, Eng 1778-79; d there 1847). He learned painting from Paul Sandby at the Royal Military College and soon became a respected amateur artist associated with the Norwich Society of Artists; from 1807 he illustrated numerous travel books on European subjects. As an officer in the Royal Artillery, he served twice in Québec - from 1822 to 1823 and from 1826 to 1832 as commander. His precise depictions of Québec City have become a priceless record of its early architecture. In 1831 he published his own travel bookQuebec and Its Environs, with the aid of a young local engraver, James Smillie. Two years later in London, he produced sets of aquatint prints of Québec City and Niagara Falls.