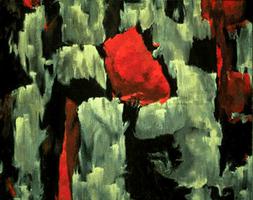 James Williamson Galloway ("Jock") Macdonald, artist (born 31 May 1897 in Thurso, Scotland; died 3 December 1960 in Toronto, ON). Instrumental in founding the Calgary Group in 1947, he was a founding member of the Canadian Group of Painters and in the influential Ontario abstract group Painters Eleven, and was active in most Canadian art societies. He is best remembered for his free-flowing abstract watercolours and the often majestic paintings of his last years.

After Jock Macdonald completed High School, he apprenticed as a draftsman in Edinburgh, Scotland, following in his architect father’s footsteps. When the First World War broke out, he enlisted and ended up serving as a gunner in the Fourteenth Argyll and Sutherland Highlanders. Wounded in France, he spent a year recovering in the hospital. Macdonald enrolled in the Edinburgh College of Art in 1919, majoring in design. He graduated in 1922 with a diploma in design and an art specialist’s teaching certificate. After graduation, Macdonald took a job as the staff designer at Morton Sundour Fabrics head office in Carlisle, England. At Sundour, he created designs for every type of fabric, including textiles, tapestries, and carpets. In 1925 Macdonald left Sundour to become the head of design at the Lincoln School of Art in Lincoln, England. A year later, in 1926, he accepted a position at the Vancouver School of Decorative and Applied Arts (now the Emily Carr University of Art and Design), and moved to Vancouver, where he lived for most of the rest of his life.

The creation of the Vancouver School of Decorative and Applied Arts was central in the evolution of a distinctive art scene and sensibility in Vancouver. Two of Macdonald’s colleagues from early on had a profound influence on the direction of his art: Group of Seven portrait and landscape painter Frederick Varley and the innovative photographer John Vanderpant.

Sharing a studio with Varley, and with Varley effectively serving as his mentor, Macdonald decided that he needed to adopt a bolder medium than the watercolour and tempera he had been using up until then. Macdonald’s early landscape paintings have the immediate sensuality and often hallucinatory lighting familiar from the best Group of Seven paintings. In The Black Tusk, Garibaldi Park, B.C. (1934), rendered during one of the painting expeditions organized by Varley, there is a steep view up the slope of the black stone peak, clouds swarming across the sky behind. In the White Forest (1932), on the other hand, is a view through tree trunks up a snowy hillside. Bathed in warm yellow light, the undulating snowdrifts are eerie and almost abstract, evoking a sense of the spirituality in the natural world.

In 1933, in the midst of the Great Depression, when the Vancouver School of Applied and Decorative Arts dramatically cut faculty salaries, Macdonald and Varley resigned from their positions and immediately founded the British Columbia College of Arts. Based in part on the spiritualist worldview of the Austrian philosopher and educational theorist Rudolf Steiner, the British Columbia College of Arts was both multidisciplinary and emphasized the latest trends of modernist art. It was during this period of experiment that Macdonald’s work began to move toward abstraction. Formative Colour Activity (1934), for instance, has at its centre a bright burst of colour forms anchored below by a stem with two sharp thorns, the flowers unfolding back into layers of increasingly abstract, less readily identifiable organic forms. Like certain aspects of the work of Emily Carr and that of her American contemporary Georgia O’Keeffe, here Macdonald is trying to explore the deep, underlying dynamic of the natural world.

In 1935, due to lack of funds, the British Columbia College of Arts was forced to close, leaving both Varley and Macdonald searching for what to do next.

Interlude on Nootka Island and a Commitment to Abstract Painting

In June, 1935, after the failure of the British Columbia College of Arts, Macdonald and his family moved to Nootka Island off the west coast of Vancouver Island, which is where the Indigenous peoples of British Columbia first encountered Europeans. Macdonald’s intention was to explore the spiritual in nature and to start an artist’s colony. Macdonald was only on Nootka for 18 months, seven months of which he was accompanied by Varley, but it was nonetheless a period during which his vision of his art moved forward and he executed major works. In Departing Day (1936), for instance, there is a bright yellow ringed moon in a blue, star-spattered sky, and below it is a black planet with a red tree shape running across it; behind, the sun recedes into a fog of light. If Formative Colour Activity is concerned with the living, organic world and its forms, Departing Day addresses larger cosmic processes and cycles. Both of these paintings are more about the inner world than the outer world; the forms and dynamics of the living world and the cosmic, mirror our inner spiritual nature.

Back in Vancouver, where he took a part time teaching position at the Canadian Institute of Associated Art and a full time position (after completing the requirements of a teaching certificate) at the Vancouver School Board’s Templeton Junior High and then the Vancouver Technical Secondary School, Macdonald’s investment in abstract art deepened. He shared his work with his old friend and colleague, the photographer John Vanderpant, who had explored abstract form in photography, as well as with Emily Carr, whose later landscape paintings Macdonald’s work had an affinity with and whose work he was a huge supporter – he even purchased her beautiful and nearly abstract Young Pines in Light (1935) for his personal collection. After Lawren Harris moved to Vancouver in 1940, Macdonald had someone he could speak to regularly about art and spirituality, and go on sketching trips with. That same year he gave a lecture at the Vancouver Art Gallery, Art in Relation to Nature, outlining his vision and philosophy of art.

Also in the 1940s, Macdonald became friends with the artist and psychiatrist Dr. Grace Pailthorpe and her partner, the artist and poet Reuben Mednikoff, and was exposed to the Surrealist concept of automatic drawing, painting, and writing. The idea of automatism, which was originally espoused by the founder of Surrealism, the French writer André Breton, and later influenced the Montreal Automatistes around the same time, was that drawing, painting, or writing spontaneously and without conscious intention makes possible the immediate expression of the deeper processes of the unconscious mind. In this vein, Macdonald executed a series of watercolours, which were exhibited at the Vancouver Art Gallery in 1946. Russian Fantasy (1946), for instance, consists of a web of interlocking shapes and squiggles, some of which resemble birds, others magnified microbes; Fish Playground (1946) has bolder, more fluid, blossoming forms rising up from the bottom as though from the bottom of the sea, crude fish forms floating above and below.

In 1946, Macdonald was appointed as the head of the Provincial Institute of Technology and Art in Calgary, Alberta. After only one year in Calgary, where he modernized the Provincial Institute’s archaic curriculum in a more experimental direction and founded the progressive Calgary Group, he was offered a teaching post at the Ontario College of Art (now the Ontario College of Art and Design University) in Toronto.

In Toronto, Macdonald continued to explore the automatic procedures he began to use in Vancouver and Calgary, but now in oil rather than watercolour, creating works like Ocean Legend (1947) that are denser, more compacted than his earlier flowing watercolours.

In 1948, Macdonald travelled with future Painters Eleven member Alexandra Luke and others to Provincetown, Massachusetts to work with the legendary German painter and teacher Hans Hofmann. Hofmann pointed out that Macdonald’s use of automatism was limited by the fact that it was based on lines and suggested that he ground his compositions in color. In the works that followed, Macdonald began using dripping and staining techniques, which essentially eliminated the overt role of representation in the works. The watercolour Scent of a Summer Garden (1952), for instance, consists of thin, floating, overlapping shapes of yellow, purple, and black, creating a work that is sumptuous and atmospheric.

In 1953, Macdonald participated in discussions with other Toronto based Abstract artists such as Harold Town, Jack Bush, and William Ronald about establishing a group focused on abstract painting; the result was the creation of Painters Eleven. In 1954 Macdonald was granted a fellowship by the Royal Society of Canada for the 1954-55 academic year to work in France, where he met the great French artist Jean Dubuffet. Back in Toronto, in 1957 Macdonald and other members of Painters Eleven invited influential New York art critic Clement Greenberg to visit Toronto and critique their work; Greenberg apparently responded the strongest to Macdonald’s most recent work.

Macdonald’s last few years as a painter are widely regarded as his most accomplished. Rust of Antiquity (1958) has bands of white flecked with blue rising against an earth brown; at the top of the picture the bands turn a powdery blue against a deeper, and harder, night-sky blue ground. Growing Serenity (1960), on the other hand, is more lyrical and reflective: soft white, yellow, and pale blue shapes undulate one over the other, as though in a landscape.