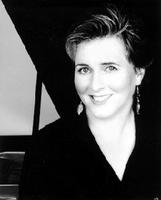 Janina Fialkowska. Pianist, b Montreal 7 May 1951; B MUS (Montreal) 1968, M MUS (Montreal) 1968. Born of a Polish father and a Canadian mother, she began studying the piano at five with the latter. Later, she studied with Yvonne Hubert at the École Vincent-d'Indy and won first prize in the 1966 CBC TV competition 'Jeunesse oblige' (classical music section) and in the 1967 Quebec Music Festivals (Canadian Music Competitions). After a year's study in 1968 in Paris with Yvonne Lefébure, she was a winner in the 1969 CBC Talent Festival. She moved to New York in 1969 on a Canada Council grant to study at the Juilliard School under Sascha Gorodnitzki, with whom she continued to work until 1976, later becoming his assistant (1979-84).

Fialkowska was a finalist in the 1971 Montreal International Competition and was one of the third-prize winners in the first Artur Rubinstein international piano competition, in September 1974 in Israel. Rubinstein was quoted in Le Figaro as saying, 'One of the jurors cried with emotion on hearing the Liszt Sonata, played beautifully by a 23-year-old Canadian: Janina Fialkowska'. Thereafter the celebrated pianist advised and supported her in the development of her career.

After 1975 Fialkowska gave recitals throughout Europe and in North and South America. She performed concertos of Liszt, Mozart, Prokofiev, and Rachmaninoff as a guest with the Los Angeles (Hollywood Bowl) Philharmonic, the London and the Israel Philharmonic (in a tour of Israel), the Royal Concertgebouw Orchestra of Amsterdam, the New Philharmonia Orchestra in London, the Royal Philharmonic (in Birmingham and Liverpool), the Scottish National Orchestra, the Hallé Orchestra of Manchester, the NACO, the TS, and the orchestras of Calgary, Chicago, Cleveland, Detroit, Philadelphia, Quebec, San Diego, Vancouver, and Warsaw, among others. She played under such well-known conductors as Andrew Davis, Charles Dutoit, Bernard Haitink, Lorin Maazel, Zubin Mehta, Eugene Ormandy, Stanislaw Skrowaczewski, Sir Georg Solti, and Klaus Tennstedt.

On 5 Dec 1976 Fialkowska performed Liszt's Concerto No. 1 with the MSO, conducted by Hiroyuki Iwaki; the next day Gilles Potvin wrote in Le Devoir: 'She has a magnificent technique and a real pianistic sense ... fire and accuracy that remind one of the greatest pianists.' In May 1977 she played for an audience of 7000 at the closing of the Festival Cervantino in Guanajuato, Mexico. In 1986, to commemorate the centenary of Liszt's death, she performed the twelve Transcendental Études, among other works, in Chicago, Los Angeles, New York, Paris, and also for the BBC in London and the CBC program 'Grands concerts' in Montreal. In 1990 she premiered with the Chicago Symphony Orchestra a Concerto in E Flat by Liszt, discovered by the musicologist Jay Rosenblatt. In London, she undertook the recording of the complete works of Chopin for the BBC.

Although Fialkowska was based in Connecticut, she continued to perform in Canada. She formed Piano Six in 1993, performing under its auspices in rural Canada; and founded the Wolfville International Piano Festival. She recorded several CDs individually, as well as accompanying Daniel Lichti and the soprano Joanne Kolomyjec on recordings of lieder and song repertoire. Her recording of Liszt's 12 Trancendental Études was an American Record Guide Critics' Choice. She premiered compositions by Libby Larsen, Sir Andrzej Panufnik, Peter Paul Koprowski, and Marjan Mozetich, and gave master classes in Quebec and elsewhere.

In 2002, Fialkowska was diagnosed with a tumour in her left arm. She underwent surgery and ceased concertizing for an extended period, returning the following year to perform left-handed concerti of Ravel and Prokofiev, transcribed for the right hand. She later resumed playing her regular repertoire.

The pianist was the subject of a CBC television documentary, The World of Janina Fialkowska in 1992 and made an Officer of the Order of Canada in 2001. In 2006, she received an honorary doctorate from Acadia University and in 2012, she won a Governor General's Performing Arts Award for lifetime achievement.