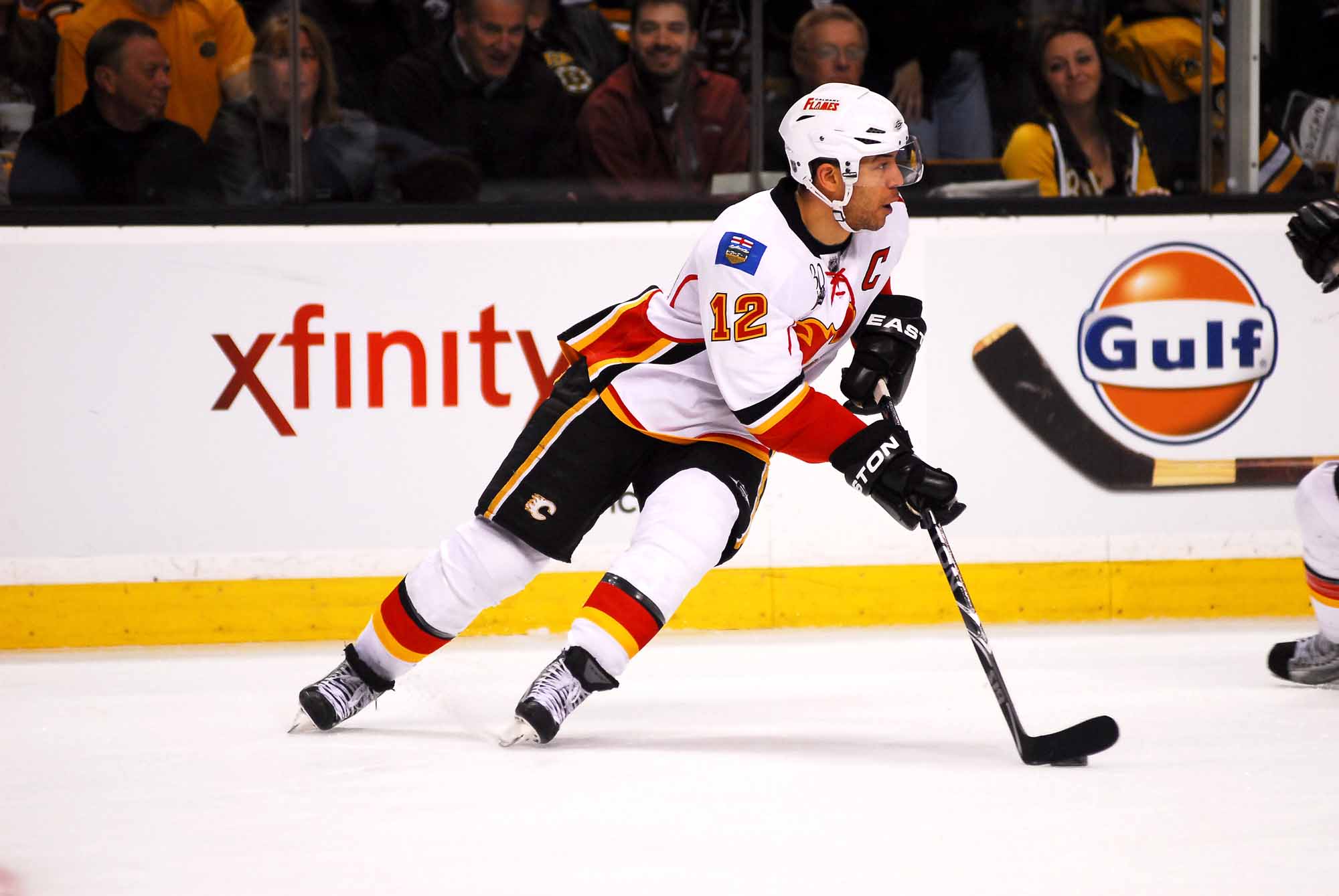 Jarome Iginla, hockey player (born 1 July 1977 in Edmonton, AB). Jarome Iginla played 20 seasons in the National Hockey League, including 16 with the Calgary Flames. He is the all-time leader for the Calgary Flames in games played (1219), goals (525) and points (1095). In 2002, Iginla became the first Black hockey player to win the Art Ross Trophy, Maurice Richard Trophy, and Lester B. Pearson Award (now Ted Lindsay Award) in the National Hockey League, and became the first Black male athlete to win a gold medal in the history of the Olympic Winter Games.

Growing Up in Edmonton

Jarome Iginla was born in Edmonton, Alberta on Canada Day, 1977, to Susan and Adekunle (Elvis) Iginla. His father is of Nigerian descent, and his mother is Caucasian, originally from the United States.

After Iginla’s parents divorced when he was two years old, he was raised by his mother and grandparents in St. Albert, near Edmonton. In a 2011 interview in the Toronto Sun, Iginla paid tribute to his grandparents, who had played a significant role in his minor hockey career:

“I’ve been very blessed to have ‘great’ grandparents, and I’ve been blessed to spend time with them. My mom was working a lot and my dad was going to [law] school. I would go there every day after school and they would take me to hockey.”

Iginla started playing hockey at age seven for the Remax Rangers Novice C team. He had the good fortune to be raised in the Edmonton area during the Edmonton Oilers’ dynasty (the Oilers won five Stanley Cups from 1984 to 1990, and are recognized by the Hockey Hall of Fame as a dynasty team). Iginla’s favourite player was goaltender Grant Fuhr, who like Iginla, had African heritage. Iginla was a goaltender himself the first two years he played amateur hockey, and admired Fuhr’s hybrid style of goaltending that combined the standup and butterfly styles.

By age 10, Iginla had switched to right wing and was recruited by Canadian businessman Bill Comrie, founder of The Brick furniture store, to play for Edmonton in the prestigious Vancouver Super Series. The series was an off-season amateur tournament for youth hockey players. (Comrie’s sons Paul and Mike would go on to play in the NHL.)

Iginla played minor hockey in St. Albert until he was 15 years old. In the 1992–93 season, while playing for the St. Albert Midget AAA Raiders, Iginla led the Alberta Midget Hockey League with 34 goals and 87 points in only 36 games.

Iginla also played baseball, which was in fact his favourite sport as a child (he played pitcher, catcher and shortstop). In 1992, the same year he led the midget hockey standings, Iginla represented the St. Albert Cardinals at the Canadian National Bantam Baseball Championship. Iginla was the all-star catcher in the tournament and batted .400 in 20 at bats.

From 1993 to 1996, Jarome Iginla played three seasons for the Kamloops Blazers of the Western Hockey League (WHL). Among his teammates were future NHL players Darcy Tucker and Shane Doan. In his rookie season (1993–94), Iginla recorded 29 points in 48 games and the Blazers won their first of two consecutive Memorial Cups. Iginla had 71 points for the Blazers in 1994–95 and 136 points (fourth in the WHL) in 1995–96. His total of 63 goals with the Blazers in 1995–96 was the second highest in the WHL that season, and Iginla was named the WHL Player of the Year.

In the 1995 National Hockey League Entry Draft, Jarome Iginla was drafted in the first round (11th overall) by the Dallas Stars. However, he would never play for the Stars. On 19 December 1995, while Iginla was getting ready to represent Canada at the World Junior Hockey Championship in Boston, he was traded to the Calgary Flames.

Iginla played his first two games with the Calgary Flames in the 1996 Stanley Cup playoffs against the Chicago Blackhawks. In the first game, he recorded an assist; in the second, he scored his first NHL goal. Iginla’s playoff performances in 1995–96 were brief, however, because the Flames were swept 4–0 in the series.

Iginla had an outstanding season in 2001–02. He led the NHL with 96 points and 52 goals (including 35 even strength goals — goals scored while teams have the same number of players on the ice). The Flames, however, did not make the playoffs for a sixth straight year.

However, Iginla was not awarded the Hart Trophy — the award given to the player considered most valuable to his team by the Professional Hockey Writers’ Association. Instead, the trophy went to Jose Theodore of the Montreal Canadiens. According to Brian Costello of the Hockey News, Iginla and Theodore finished in a tie, but Iginla lost because he had fewer first-place votes than Theodore; one voter did not even include Iginla’s name on the ballot. The controversy led the NHL to change its voting procedures.

At the beginning of the 2003–04 NHL season, Jarome Iginla was named the 19th captain in franchise history. He delivered as a leader and player, and for the second time in his career won the Maurice Richard Trophy for the most goals (41) in the regular season. His physical style of play (and his willingness to get into fights) also earned him a reputation as an elite power forward.

It was under Iginla that the Calgary Flames finally made it to the playoffs, after a seven-year drought. Expectations were not high for the team heading into the regular season. However, a mid-season trade by new Flames general manager Darryl Sutter, in acquiring star goaltender Miikka Kiprusoff from the San Jose Sharks, helped the Flames significantly reduce their goals against. At the end of the regular season, the Flames finished in sixth place in the Western Conference and qualified for the playoffs, exciting a new generation of hockey fans in Calgary.

Iginla’s best game with the Calgary Flames arguably came in game seven of the playoff series against the Vancouver Canucks, in which Iginla scored two goals and recorded an assist on Martin Gelinas’s overtime winner. It was the first time the Flames had won a playoff series since 1989.

The Flames went on to beat the Detroit Red Wings and the San Jose Sharks in the playoffs before losing the Stanley Cup Final in seven games to the Tampa Bay Lightning. Iginla led the NHL in playoff goals with 13, and led the Flames with 22 playoff points.

Iginla also accumulated 45 penalty minutes in the playoffs, and got into fights with Mattias Ohlund of the Vancouver Canucks, Derian Hatcher of the Detroit Red Wings and Vincent LeCavalier of the Tampa Bay Lightning.

Records with the Flames

Iginla played eight more seasons with the Calgary Flames from 2005 to 2013 (the NHL cancelled the 2004–05 season because of a labour dispute). In 2007–08, Iginla scored 50 goals for the second time in his career and earned a personal best 98 points. He was third in the NHL in scoring, behind Alexander Ovechkin and Evgeni Malkin.

When Iginla played his last game for Calgary in the 2012–13 season, he held several notable franchise records, including most goals (525), points (1095), games (1219), and consecutive games (441). Iginla was also on the NHL First All-Star team three times while with the Flames, represented the Flames in six NHL All-Star games, and led the Flames in scoring 11 straight seasons from 2001 to 2012.

On 28 March 2013, Iginla was traded for the second time in his career, this time to the Pittsburgh Penguins. Iginla earned 11 points in 13 regular season games with Pittsburgh and 12 points in 15 playoff games. He then signed a one-year contract with the Boston Bruins for 2013–14, and led the Bruins with 30 goals. For 2014–15, Iginla joined the Colorado Avalanche, leading Colorado with 29 goals and tying Gabriel Landeskog in points with 59. On 4 January 2016, while playing for the Avalanche, he scored his 600th NHL goal, only the 19th player in NHL history to do so. In March 2017, he was traded to the Los Angeles Kings.

In July 2018, Iginla officially announced his retirement from professional hockey at a press conference in Calgary. Over the course of his NHL career, he scored 625 goals and made 675 assists, for a total of 1,300 points in regular season play.

Jarome Iginla has won five gold medals in 42 games with Team Canada, scoring 19 goals and 15 assists for 34 points total. At the 1996 World Junior Hockey Championship, which Canada won, Iginla led the tournament in scoring with 12 points and was named the tournament’s best forward. He was also part of the Canadian teams that won the 1997 World Hockey Championship in Helsinki and the 2004 World Cup.

Away from the rink, Jarome Iginla has been very active in volunteering. Following the 2003–04 NHL season, Iginla won the King Clancy Memorial Trophy, presented to the player who exemplifies outstanding leadership qualities on and off the ice. Among the programs Iginla has been involved with are “Reading…Give it a Shot,” Easter Seals, and the Juvenile Diabetes Research Foundation.

Iginla also supports KidSport, a charitable organization that provides financial assistance for registration fees and equipment. Since the 2000–01 season, he has donated $1,000 to KidSport Calgary for every goal scored; in 2005, he increased the amount to $2,000, which is divided equally between the Calgary chapter and the national organization. By 2011, Iginla had donated $650,000 to KidSport Calgary alone.