James Patrick Brady, prospector, Métis leader (born 11 March 1908 in Lake St. Vincent, AB; disappeared 7 June 1967 in the Foster Lakes area, SK). A grandson of one of Louis Riel’s soldiers, Brady became a leader among the Métis of northern Alberta and Saskatchewan. He was active in the radical politics of the 1930s, trying in vain to persuade the  Co-operative Commonwealth Federation (CCF) in Saskatchewan to implement progressive Indigenous policies. Brady was a founding member of the Association des Métis d’Alberta et des Territoires du Nord-Ouest in 1932 and remained a major figure in the organization as an influential teacher. The last moments of his life are shrouded in mystery as he disappeared on a prospecting trip in 1967.

James Patrick Brady, prospector, Métis leader (born 11 March 1908 in Lake St. Vincent, AB; disappeared 7 June 1967 in the Foster Lakes area, SK). A grandson of one of Louis Riel’s soldiers, Brady became a leader among the Métis of northern Alberta and Saskatchewan. He was active in the radical politics of the 1930s, trying in vain to persuade the  Co-operative Commonwealth Federation (CCF) in Saskatchewan to implement progressive Indigenous policies. Brady was a founding member of the Association des Métis d’Alberta et des Territoires du Nord-Ouest in 1932 and remained a major figure in the organization as an influential teacher. The last moments of his life are shrouded in mystery as he disappeared on a prospecting trip in 1967.

Jim Brady was born in 1908 at Lake St. Vincent near St. Paul des Métis, the largest Métis community in Alberta that became exclusively Métis after 1885. By 1909, however, due to an influx of white squatters, St. Paul des Métis was disbanded as a Métis settlement and open to general settlement. His father, Jim Brady Sr., was a Dominion land agent, postmaster and wealthy storekeeper. Depending on the source, Brady Sr.’s ancestry is listed as Scottish or Irish. His mother, Philomena Archange Garneau, was Alberta’s first registered nurse of Métis ancestry.

Jim Brady’s maternal grandfather, Laurent Garneau, as well as other relatives, helped raise him after his mother died. A friend of Louis Riel’s, Garneau had joined Riel and the Métis in the Red River Rebellion of 1869–70 and North-West Rebellion of 1885. From Garneau, Jim Brady learned the roots of the Métis struggles in the Northwest. Later, he wrote about his grandmother’s ingenuity when five North-West Mounted Police officers arrived at her home to arrest her husband in 1885. They were searching for a letter to Garneau from Riel. Brady’s grandmother had been doing laundry when they arrived. She put the letter and other incriminating documents in the washtub and destroyed them by rubbing them on the washboard until they disintegrated.

The history and composition of Jim Brady’s hometown of St. Paul des Métis had a significant impact on his later life. After the North-West Rebellion of 1885, many Métis had moved farther west, settling in small family groups in isolated parts of Alberta. Many were poor squatters who spent a precarious life on small Crown land holdings. By comparison, Jim Brady’s middle-class life was relatively privileged. Regardless, members of Brady’s family were vocal advocates of Métis identity and social equality. Politicians, radicals and union supporters served as Brady’s informal tutors when he was a young man. In later years, he educated Métis communities on the rights of squatters on Crown lands and mobilized them around this issue.

Brady was self-educated in history and politics. According to those close to him, Brady was fluent in Cree, Michif, English and French. He also spoke some German and Spanish and knew Latin.

In the late 1920s, while working as a labourer, Jim Brady adopted Marxist philosophies and considered himself a communist. Along with fellow Métis leaders Felix Callihoo, Joe Dion, Peter Tomkins and Malcolm Frederick Norris, Brady helped to politically organize the Métis in Alberta during the 1930s. People often called them “the big five” or “the fabulous five.” Brady played a vital role in the formation of the Métis Association of Alberta (now the Métis Nation of Alberta) and the Alberta Métis settlements.

In 1933, the Métis Association of Alberta had 1,200 members in 41 locals; its priority was to lobby the government to improve the social and economic conditions of Métis and non-status Indian people in the province. Brady and his allies urged the provincial government to study their living conditions. Due to their intense lobbying, the government of Alberta appointed the royal Ewing Commission in 1934 to hear testimony and make recommendations regarding the poverty, health problems and lack of education of the Métis people in the province. During the hearings, Jim Brady served as an instrumental political strategist. His lobbying helped bring about the Alberta government’s passage of the Metis Population Betterment Act in 1938, which gave Métis people in Alberta tracts of land and social welfare programs. 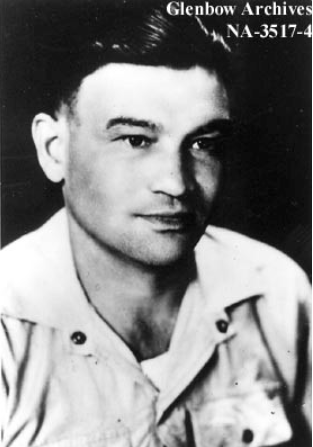 When the Second World War broke out, the Canadian Armed Forces initially refused Jim Brady entrance into the army because of his communist affiliations. Instead, he continued his active involvement in the Communist Party of Canada and the Co-operative Commonwealth Federation (CCF), involvement that had begun in the 1930s. In 1941, he supervised the government-sponsored and short-lived Wolf Lake Métis colony. Two years later, in June 1943, Jim Brady was accepted into the army and joined the war effort overseas, boarding a troop ship bound for England in October. During his military service, he kept a detailed diary of his wartime experiences. These “Diaries,” which he kept from 1944 to 1965, are held in the James Brady fonds (collection) at Glenbow Museum in Calgary, Alberta.

DID YOU KNOW?
While at Wolf Lake Métis colony in 1941 and at Cumberland House, Saskatchewan in 1949, Jim Brady began to create a visual record of Métis life. An amateur photographer, he took portraits of Métis people living and working around these settlements. This included women in fields and men in work clothes or uniform. Brady always included the subject’s name, date and place and sometimes birthplace on the photo. This created a new archive of Métis identity at a time when most Métis appeared in government scrip records solely by their family name. Today, hundreds of Brady’s images, some dating back to the 1920s, are in the archives at the Glenbow Museum in Calgary, along with correspondence, diaries and scrapbooks from his political career. 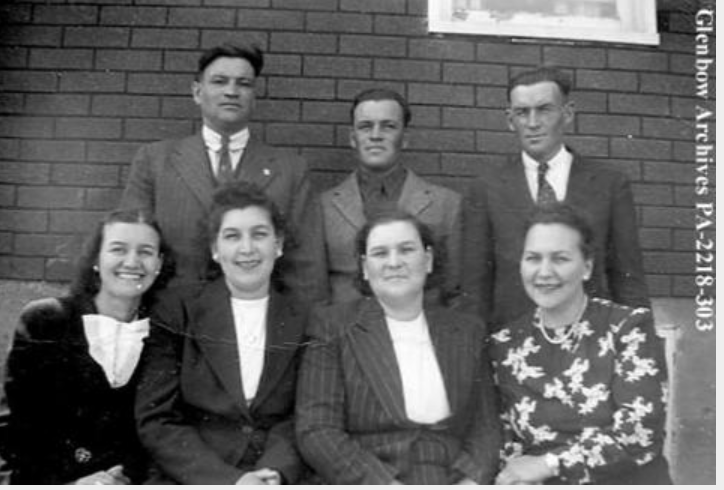 The Brady family, Edmonton, 1948 (James is in the back row, far left, courtesy Glenbow Archives).

Following the Second World War, Jim Brady worked for the Department of Natural Resources as a conservation officer, prospected, and helped establish resource co-operatives in the fish, timber and fur industries, primarily in Northern Saskatchewan and Alberta.

After the war, when Jim Brady relocated to the Métis settlement of Deschambault Lake, Saskatchewan, he became field officer at the government trading post and supervised local fishermen. From 1948 to 1951, he lived at the Co-operative Commonwealth Federation-run site Cumberland House in Saskatchewan; however, by the early 1950s, he had grown disillusioned with the federation.

In 1951, Brady moved to La Ronge in Northern Saskatchewan, where he lived in a log cabin lined with scholarly books. Throughout his life, Jim Brady passionately studied history and politics and sought equal rights for the Métis. He told an interviewer in 1960: “They [the Métis] must be freed of the disabilities which colonialism has imposed upon them.” At a 1963 CCF convention, he tried unsuccessfully to bring the degree of Indigenous suffering in the North to leader Tommy Douglas’s attention.

With Malcolm Frederick Norris, Jim Brady helped found the Métis Association of Saskatchewan and was a key organizer of the Association’s La Ronge local (now known as the Jim Brady Local #19, for Métis community members). The organization’s goal in 1965 was “to organize people of Indian ancestry in the Province of Saskatchewan to secure recognition for and realization of our hopes and aspirations towards a better way of life consistent with the opportunities available within Canadian society.”

In his final years, Jim Brady gave up on organizing large projects, focusing on local harm reduction and education in the La Ronge region.

Jim Brady and his Cree friend Absolum (“Abbie”) Halkett, a Lac La Ronge band councillor, went prospecting in June 1967 in northern Saskatchewan by Lower Foster Lake. With their camp on shore and canoes in the water, both men vanished. An extensive RCMP search of the lake revealed nothing. No bodies were ever recovered. Some community members believed that both men were murdered due to Brady’s radical politics and their outspokenness regarding substandard living conditions in northern communities.

Decades later, Eric Bell, who had met Brady as a child and owned La Ronge EMS, led a search and recovery team that explored the lake. They used aremotely operatedvehicle that could capture images underwater. Two searches, in August and September 2018 respectively, uncovered an “anomaly not natural to the lake.” Two specialists agreed that this could indicate human remains, but the RCMP has said the evidence so far is inconclusive.

The Métis community hails Jim Brady as one of the most influential political figures of the 20th century and a key player in what is called the Métis liberation movement. Today, some Métis families still remember how Jim Brady’s pride and dedication to positive change helped open their minds to envision a better future for their people.

A stone memorial dedicated to Jim Brady’s contributions to the Métis community and Saskatchewan’s heritage stands in front of the Kikinahk Friendship Centre in La Ronge. Funded through SaskCulture’s Métis Cultural Development Fund, it was unveiled during Jim Brady Days on July 10, 2011.