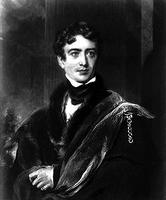 Two nations warring in the bosom of a single state was Lord Durham's assessment of the relationship between Lower Canada's two linguistic communities (courtesy Library and Archives Canada/C-121846).

John George Lambton Durham, 1st Earl of, politician, diplomat, colonial administrator (b at London, Eng 12 Apr 1792; d at Cowes, Eng 28 July 1840). Scion of a wealthy Northumberland family, Durham was educated at Eton, briefly held an army commission, was elected to the Commons in 1813 and raised to the Lords in 1828. Affiliated with the liberal wing of the Whig party, "Radical Jack" was lord privy seal in 1830 in the Cabinet of his father-in-law, Lord Grey, and played a significant part in drafting the great Reform Bill of 1832. He was a difficult colleague and, suffering from poor health, he resigned in 1833 but was ambassador to Russia 1835-37.

Primarily to appease the radicals, PM Lord Melbourne persuaded him to become governor general and high commissioner to British N America with responsibility for preparing a report on the Canadian REBELLIONS OF 1837. On 29 May 1838 Durham landed in LOWER CANADA. His administration was warmly endorsed by the English minority in Lower Canada, the moderate reformers in Upper Canada and the American government, as well as the authorities at home.

But when the British government refused to sanction an illegal ordinance exiling a handful of political prisoners to Bermuda, Durham submitted his letter of resignation 29 Sept 1838 and sailed from Québec 1 Nov 1838 to England where in Jan 1839 he completed his famous Report on the Affairs of British North America. His major recommendation was to reunite the Canadas in order to accelerate the assimilation of the French Canadians, whom he characterized as a people without a history or a culture; the union was brought into effect in 1841. He also recommended a reorganization of the system of colonial government, but the British government refused to accept the principle of RESPONSIBLE GOVERNMENT (a term for which Durham refused to accept paternity because of its ambiguity) because it was not prepared to accept the inevitability of a form of party government in the colonies.

Although Lord Sydenham and his successors in the United Province of Canada and Lord Falkland in Nova Scotia in practice did accept the necessity of governing through a majority in the assembly, the principle of responsible government was not formally recognized by the British government until 1847, and the first avowedly party governments were admitted to power in 1848, in Nova Scotia by Sir John Harvey and then in Canada by Durham's son-in-law Lord ELGIN.

Recent historiography has tended to be more critical of Durham's behaviour and skeptical of his accomplishments, and he remains a hated figure in French Canada, but he was pre-eminent among the founders of the modern COMMONWEALTH.