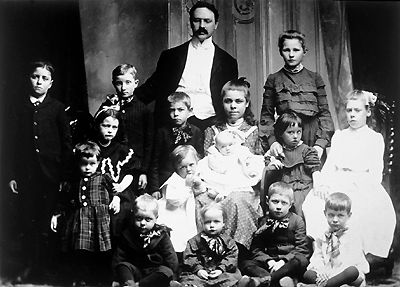 John Joseph Kelso, founder of the Children's Aid Society, 1900, and of the Toronto Humane Society (courtesy Library and Archives Canada/C-85881).

John Joseph Kelso was born on 31 March 1864 in Dundalk, Ireland. His father, George, ran a manufacturing business. When a fire destroyed the family’s business, they moved to Canada. Kelso was 10 years old when he moved, along with his eight siblings. Upon moving to Canada, the family struggled with poverty, cold and hunger. Kelso helped by collecting firewood and taking odd jobs, including selling newspapers and working in a print shop. He attended Jarvis Collegiate Institute in Toronto, Ontario. At the age of 14, he witnessed the arrest of five of his friends for petty theft. They were imprisoned with adult criminals. This experience shaped his later interest in child welfare.

After graduating from Jarvis Collegiate Institute, John Joseph Kelso worked as a proofreader for The World newspaper in Toronto. He also wrote unpaid articles for The World. Kelso was promoted to the position of police reporter, which he held for three years. While working as a reporter, Kelso saw that conditions for children could be harsh. Those from impoverished families were often apprenticed to work at a young age. Some were abandoned. Kelso noticed that many children born in impoverished and neglected conditions engaged in criminal behaviour. The police system did not have a way of compassionately dealing with children, who were imprisoned along with adults.

Kelso also took an interest in the welfare of mistreated animals. Old and disabled horses, in particular, were often overworked with heavily loaded wagons and streetcars. In 1886, a reader sent a letter to The World about the poor treatment of horses. Kelso responded by writing “Why don’t we have a society for the prevention of cruelty?” Readers began to send in charitable donations for the establishment of such a society.

In 1887, Kelso was hired as a police reporter for The Globe, where he worked until 1902. During this time, Kelso wrote and published many articles based on his interviews with impoverished and mistreated children in Toronto. 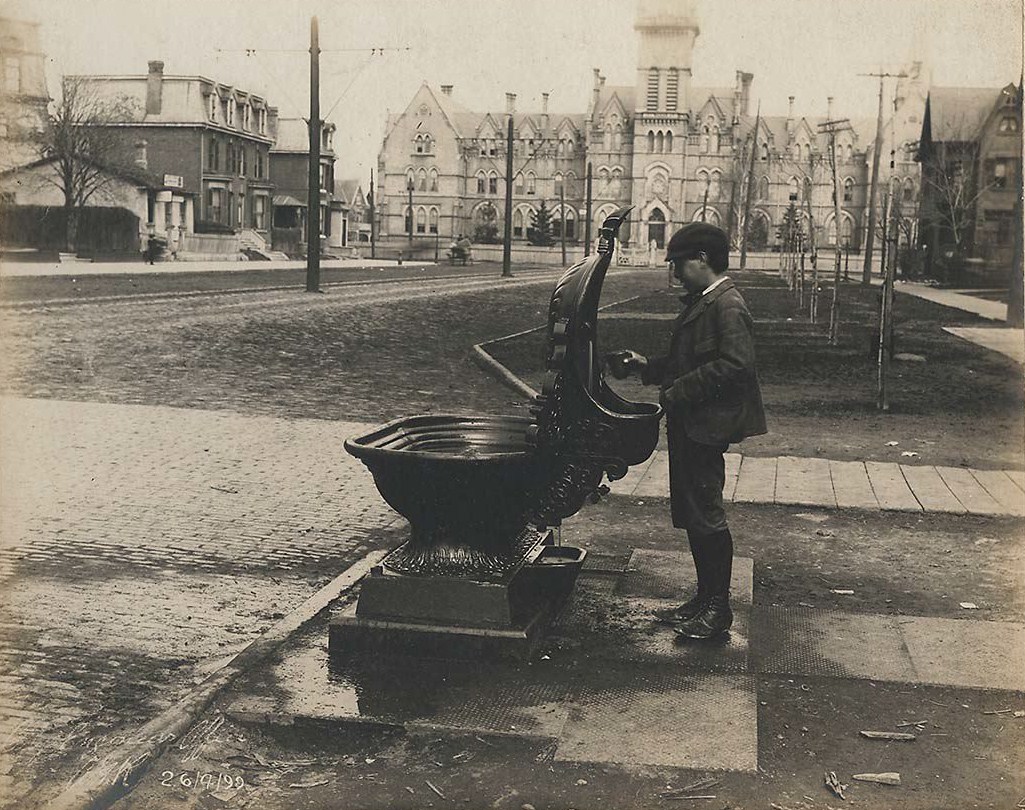 Drinking fountain at College Street and Spadina Avenue in Toronto, Ontario. Fountains such as this, designed to accommodate horses on one side and people on the other, were common in Toronto in the late 19th century. Photo taken 26 April 1899.
(photo by F.W. Micklethwaite, courtesy City of Toronto Archives, Fonds 200, Series 376, File 2, Item 49, Wikimedia CC)

In 1887, John Joseph Kelso founded the Toronto Humane Society. This organization was originally designed for the protection of children and animals from cruelty and neglect. (It now focuses on animals alone.) The society was based on Christian principles of love and kindness but was non-denominational. The society worked with the police to enforce changes in public behaviour. For instance, more drinking fountains for horses were installed throughout the City of Toronto. The society also fought to reform child welfare laws and worked with lawyers to develop a juvenile court system. They argued that young offenders should be tried separately from adults. 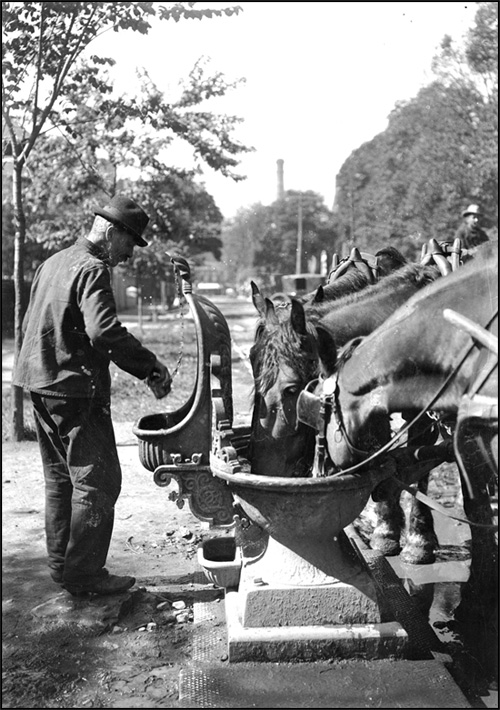 In 1888, John Joseph Kelso founded the Fresh Air Fund in Toronto. This program organized and ran outings to outdoor destinations, including parks and the Toronto Islands, for impoverished and neglected children. The hope was that children would benefit from fresh air, exercise and companionship through these experiences with nature.

In 1891, John Joseph Kelso resigned as secretary of the Toronto Humane Society to focus on organizing and founding the Children’s Aid Society of Toronto. He was elected the first president of the society that year. This new society focused particularly on neglected children. Kelso worked to establish a temporary emergency shelter for children, which opened in 1892. Some of the society’s other goals included licensing newsboys, opening kindergarten mission schools for neglected children under the age of seven, and establishing industrial homes to educate and train homeless and abandoned children. 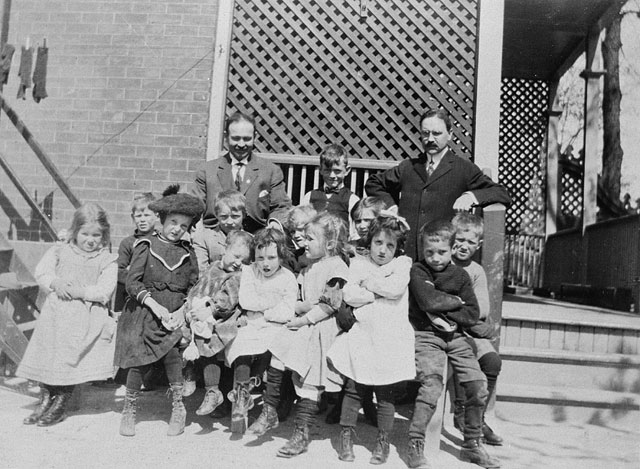 Throughout his career, John Joseph Kelso argued that the government should take more responsibility to protect at-risk children. In 1893, Canada’s first Children’s Protection Act was established. The 1893 Act for the Prevention of Cruelty to and Better Protection of Children instructed that children’s aid societies should be established across Ontario. These societies could intervene and legally care for neglected children. In 1893, Kelso became Ontario’s first Superintendent of Neglected and Dependent Children. As superintendent, Kelso established children’s aid societies across Ontario.

As superintendent, Kelso also oversaw the placement of “home children” from temporary residences to new homes. More than 100,000 orphaned, neglected and impoverished children were sent from the British Isles to Canada between 1869 and the late 1930s to work on farms. Known as “home children,” these children lived in temporary residences before moving to rural areas to work as domestic helpers and farm labourers. The farmers provided accommodations, food and small allowances in return for the children’s labour. However, these conditions were often violated, and many of these children faced various kinds of abuse. Eventually, the federal government took over this responsibility.

Throughout his career as an advocate for children, John Joseph Kelso argued for many reforms to improve the well-being of children and families. He advocated for financial allowances for mothers and the creation of playgrounds for children with the Toronto Playground Association. He pushed to legalize adoption and actively supported Ontario’s first Adoption Act. In 1921, he became the administrator of Ontario’s Adoption Act and the Children of Unmarried Parents Act.

John Joseph Kelso married Irene Maddin Martin in 1901. They had two children, Martin and Irene. Kelso retired in 1934. He died on 30 September 1935 in Toronto at the age of 71. He left behind a legacy as a leader in Canadian child welfare and became known as “the children’s friend.”