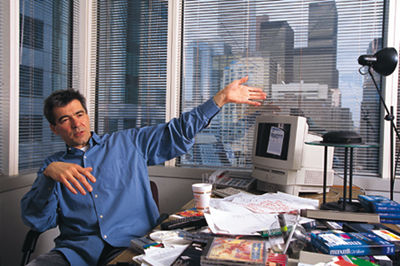 Ken Finkleman is the creator and star of the television shows The Newsroom and More Tears. Image: Maclean's magazine.

Finkleman was a law student in the 1970s when the creative life beckoned. More interested in the comic pieces he wrote for the law school newspaper than in actually becoming a lawyer, he dropped out after two years to take a job writing for the CBC Television series The Frankie Howerd Show (1976). His producer then set him up with an audition in Los Angeles to write for the short-lived Dick Van Dyke series Van Dyke and Company (1976).

Although he never officially settled in Los Angeles (“I was frightened for even the tiniest root to start to grow in that horrible city,” he has said), he was still ambitious enough to infiltrate the inner circles of such influential figures as Don Simpson, Michael Eisner, Joel Silver and Jeffrey Katzenberg, and soon landed a gig writing the screenplay for Grease 2 (1982). He wrote and directed Airplane II: The Sequel (1982) and the comedy Head Office (1985) before collaborating on the screenplay for the Madonna vehicle Who’s That Girl (1987).

After establishing his career in a conventional comedic vein, Finkleman found his true voice during a period of ironic, understated, self-referential comedy in the early 1990s.

He introduced the character of George Findlay as a supporting player in the multiple-Gemini Award-nominated comedy series Married Life (1995), and then built his next series, The Newsroom, around the ratings-obsessed television producer. Directly influenced by Garry Shandling’s The Larry Sanders Show (1992–98), which revealed the morass of neurotic tensions bubbling in the wings of a late-night talk show, The Newsroom reflected Finkleman’s interest in what he called, “the complex hypocrisy of the mainstream news.” The show took viewers behind the scenes of the fictional news program City Hour, producedat a thinly-veiled version of public broadcaster CBC.

The Los Angeles Times called it the “funniest, freshest, most original sitcom to air here this season,” while Maclean’s TV critic Jaime Weinman dubbed it “the greatest show Canada has ever produced.” Finkleman won four Gemini Awards, two Writers Guild of Canada (WGA) Awards and two Directors Guild of Canada (DGC) Awards for his work on The Newsroom, which also won an International Emmy Award in 2005 for Best Comedy. He went on to reprise the role of George Findlay in his series More Tears (1998), the Woody Allen-esque Foolish Heart (1999), Foreign Objects (2000–01), Good Dog (2011–12) and Good God (2012).

Finkleman has talked at length about the impact of his Jewishness — and specifically the anti-semitism he faced growing up in Winnipeg — on his alienated and needling TV persona and on his talent as a sardonic observer of human frailty, malice and absurdity. The name “Findlay” emerged as his alter ego during his youth due to the anti-semitism he experienced; afraid that Finkleman would reveal his Jewishness and lead to harassment at a local pool hall he frequented, he insisted that his friends there refer to him as “Ken Findlay.” This preservationist’s perspective permeates Finkleman’s oeuvre, and is perhaps exemplified by an episode of Good Dog in which George Findlay summarizes his general worldview as “the fear of extermination.”

Given to provocative and destabilizing opinions, Finkleman — who published his first novel, the satirical crime story Noah’s Turn, in 2010 — argued during a controversial interview with CBC Radio One personality Jian Ghomeshi that comedy isn’t necessarily funny. “My own personal opinion,” he once said, “is that the best show ever was The Larry Sanders Show. But I never once laughed at it.” George Findlay may not be an obvious, laugh-out-loud comedic character, but he’s so blatantly and ridiculously self-serving — not to mention hypocritical, self-absorbed, cynical and just plain cruel — that he’s hilarious.

Findlay is also Finkleman’s vision of Everyman as urban professional, promoting his selfish interests and covering his own back at everyone else’s expense. “I like to take the low road,” Finkleman once told CBC interviewer George Stroumboulopoulos. “I don’t like taking the high road like Michael Moore. He’s a preacher. He thinks he has the truth…. I much prefer to show the bad guys.”