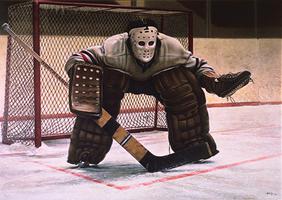 He began as an abstract painter, though a visit to an exhibition of Andrew Wyeth's work at Buffalo, New York, in 1962 confirmed his disenchantment with abstraction. He turned to painting carefully posed, snapshot-like views, often of rural Ontario seen in a strong light.

Ken Danby is best known for his study of anonymous sports figures, subjects from everyday life which at the same time reveal his rare gift of creating unforgettable visual images. In At the Crease (1972), the masked ice-hockey goalie recalls knights of an earlier day; for many, the painting has become something of a national symbol.

In 1983 and 1984 Ken Danby prepared a series of watercolours on the Americas Cup and the Canadian athletes at the 1984 Sarajevo Olympics. From 1985 to 1991 he served on the governing board of the CANADA COUNCIL; from 1991 to 1995, he served as a member of the Board of Trustees of the NATIONAL GALLERY OF CANADA. In 1997, Ken Danby received an Honorary Doctorate of Fine Arts from Laurentian University.