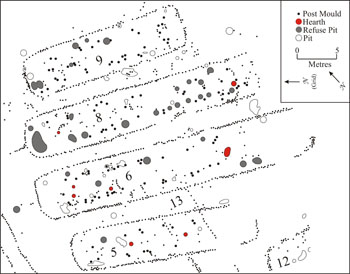 Map showing the details of longhouses 5, 6, 8 and 9 (courtesy Museum of Ontario Archaeology) 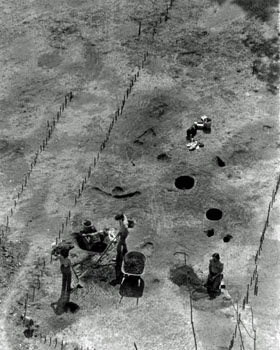 Excavation of the Lawson site, 1979 (courtesy Museum of Ontario Archaeology).

Map showing the location and features of the Lawson Iroquoian village (courtesy Museum of Ontario Archaeology). 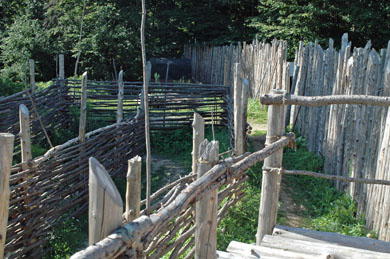 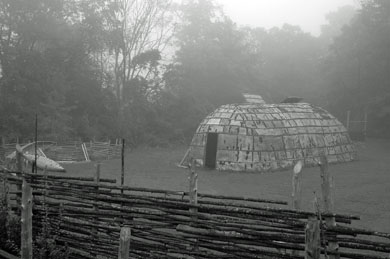 Reconstructed longhouse No. 1, and palisade (courtesy Museum of Ontario Archaeology). 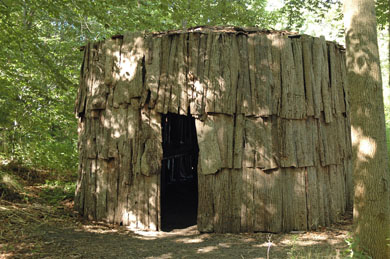 The Lawson site is a 2-hectare village originally occupied by the Neutral Iroquoians circa 1500–25 CE. Archaeologist William Wintemberg commissioned the first major archaeological excavations of the site between 1921 and 1923. The Lawson site became the first archaeological site in Ontario to be placed on the Canadian Register of Historic Places in 2004.

History of the Neutral Village

The Lawson site occupies a flat plateau, naturally protected on three sides by steep slopes down to the confluence of Snake Creek and Medway River in present-day northwestern London, Ontario. During the 16th century, the Neutral augmented this natural defensive location with the construction of an elaborate fortification system, which included multiple rows of fences supported at their bases by two man-made earthworks (artificial banks of soil), an entrance maze and lookout platforms. The fences and earthworks surrounded a complex village that contained as many as 40 longhouses, housing a population of approximately 2,000 people. The longhouses excavated to-date range in length from 10 m to 36.25 m, and in width from 5 m to 7.5 m, and contained between two and five hearths each.

The subsistence economy of the Neutral involved horticulture supplemented by hunting, fishing and gathering. The primary crops grown were known as the Iroquoian "Three Sisters” —corn, beans and squash — planted in cleared fields surrounding the village. As of now, 14 horticultural cabin sites have been found within a 4 km radius of Lawson, each containing only one or two longhouse-type structures. This suggests that the Neutral village at Lawson may have been largely devoid of population between April and December as its residents occupied the cabins while tending the crops.

Although 75 per cent of the Lawson site has been undisturbed, it has yielded in excess of 300,000 artifacts which provide crucial data about the daily lives of the Neutral. Among those artifacts are several objects which suggest the Lawson site was a major regional centre of the pre-contact Neutral of southwestern Ontario, who were engaged in trade and interaction with other Aboriginal peoples, and which brought materials from elsewhere to the site, such as marine shells from the Atlantic Seaboard, copper from Lake Superior, and other artifacts from Michigan, Ohio, Pennsylvania and Illinois.

Archaeology on the Lawson Site

The Lawson site has been known to archaeologists since the mid-19th century. Dr. Solon Woolverton, a geology professor at Western University first recognized the research potential of the site in the late 19th century. Woolverton introduced the site to David Boyle, Ontario's first professional archaeologist of the Provincial Museum in 1894, and conducted initial archaeological investigations on the site between 1895 and 1920. Boyle wrote the first formal description of the site and his successor, Rowland B. Orr continued his research in 1917.

Limited investigations of the Lawson site were completed by Wilfrid Jury in 1933 after he and his father, Amos Jury, founded the Museum of Indian Archaeology and Pioneer Life (now the Museum of Ontario Archaeology) at the University of Western Ontario in London, Ontario. The museum was relocated in 1981 from the university to a new building built beside the Lawson site.

Today, the site remains Canada's only ongoing excavation and reconstruction project at a pre-contact Aboriginal village.

Recognition as an Historic Site