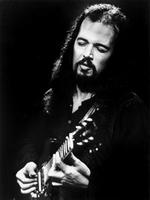 Leonard Harold Breau, guitarist, singer, composer (born 5 August 1941 in Auburn, ME; died 12 August 1984 in Los Angeles, CA). A revered cult figure in the world of jazz guitar, and a member of the Canadian Music Hall of Fame, Lenny Breau was a technical genius with a delicate, idiosyncratic style. He was renowned for his comprehensive musical vocabulary — which included jazz, country, flamenco, folk and classical — and his ability to play the guitar like a piano, using fingers or pairs of fingers on his right hand independently of each other to juggle bass, melody and chords, thus playing multiple voices simultaneously. He recorded infrequently and was as notorious for his substance abuse and self-destructive tendencies as he was for his musical abilities. The legend surrounding him grew after his death in 1984, which remains an unsolved homicide.

Breau was born in Maine to Acadian parents — the country singer Hal “Lone Pine” Breau and the yodeler Betty Cody — who performed widely in concert and on radio. Lone Pine also recorded for the Banff and RCA labels, and composed such songs as “I Hear the Prairies Calling” and “Prince Edward Island is Heaven to Me.” When Breau was seven his family moved to the Maritimes, where his parents were heard locally on CKCW Moncton, CFBC Saint John, and nationally on the CBC.

Breau showed a facility for music as early as age three. He started playing guitar at age eight, was performing with his parents at 12, and by 15 was a star attraction in their band, going by the name “Lone Pine Junior.” He taught himself to play Chet Atkins’ thumb-pick and finger-style technique after hearing it on the radio, devoting himself so single-mindedly to the guitar that he dropped out of school and was by some reports barely literate.

In 1957, Breau’s family moved to Winnipeg, where his parents took a job hosting a daily half-hour show on radio station CKY. He performed regularly with his parents, received informal guidance from jazz pianist Bob Erlendson and offered the same to a young Randy Bachman, who befriended Breau at one of his shows. (Bachman has said that Breau “taught me everything about guitar” and has cited Breau’s influence on such songs as The Guess Who hit “Undun.”)

By age 20, Breau had developed a widely-admired facility in jazz, country, flamenco and folk styles. He showed a particular interest in jazz — his father once slapped him after a show for improvising a jazz part in the middle of a song — and became focused on emulating the style of jazz pianist Bill Evans.

Breau’s youthful virtuosity, eclecticism and technical innovation drew the attention of a manager who brought him to Torontoin 1961. Breau turned down an offer to play in Tony Bennett’s band in order to play with Don Francks and Ian Henstridge, with whom he appeared as the trio Three in the NFB documentary Toronto Jazz (1962). The trio subsequently released the live album At the Purple Onion (1963) and performed on American network television shows hosted by Jackie Gleason and Joey Bishop.

Breau's adult life was nomadic, his career interrupted repeatedly by his battle with drug addiction and depression. After stints in New York and Toronto, where he performed in nightclubs and coffeehouses such as George's Spaghetti House and the Riverboat, he returned to Winnipeg and appeared on local CBC television shows Teenbeat, Music Hop and his own The Lenny Breau Show. He was also featured in the CBC profile One More Take (1968).

In 1967, Breau met his idol Chet Atkins and turned down an offer to record for RCA before finally agreeing to record an album in Nashville with Atkins as producer. His first two albums — Guitar Sounds from Lenny Breau (1968) and The Velvet Touch of Lenny Breau – Live! (1969) — were unsuccessful commercially, but made Breau something of a legend among musicians.

Breau recorded several of his own compositions, some of them very casually conceived, including “Taranta,” “Spanjazz,” “Lone Pine,” “Five O'Clock Bells” and a variety of blues themes. He released 10 albums in his lifetime, but never really rose above the status of underground phenomenon. The Legendary Lenny Breau (1979), often regarded as his finest recording, was released by an obscure label that only sold it through mail order.

Between 1975 and 1981, Breau stayed out of Canada after being charged with trafficking marijuana in Toronto. (the charge was eventually reduced to simple possession and a $1,000 fine.) During this time, Breau lived in Nashville, Maine, New York and Los Angeles, where he eventually settled. He recorded intermittently, usually in country or solo settings, and also taught and performed. He returned on occasion to Canada; a recording of his performances with bassist Dave Young at the Toronto club Bourbon Street was issued posthumously in 1995. He also appeared in the US television documentary Talmadge Farlow (1981) and wrote a column for Guitar Player magazine.

On 12 August 1984, Breau was found dead in the roof-top swimming pool of his apartment building in Los Angeles. The autopsy report concluded that he had been strangled and his death was ruled a homicide. No charges were laid and the case remains unsolved.

Breau’s unique and innovative finger-style technique opened up melodic and harmonic possibilities not previously explored by jazz guitarists. Later in his career, he began playing a custom seven-string guitar equipped with a high A tuned two octaves above the fifth string, which allowed him to replicate on guitar a pianist's capacity for simultaneous linear and chordal development.

For all of its technical clarity and facility, his playing had an impressionistic drift and an underlying lyricism. He was known to carry a Renoir print in his guitar case for inspiration, and once described himself as “a colorist, adding different colours and shades by using different techniques and touching the guitar in different ways.” He added that his goal was “to play sounds you can see if you’ve got your eyes closed.” His mastery and refinement of chime-like harmonics have been emulated by many other guitarists.

Chet Atkins once called Breau the greatest guitarist in the world, adding, “If Chopin had played the guitar, he would have sounded like Lenny Breau.” Guitarist Danny Gatton once said, “Lenny Breau played more great stuff at one time than anybody on the planet, with feeling and tone. He was the best that ever lived, bar none.” Pat Metheny has cited Breau as a major influence and once stated that “he came up with a way of addressing the instrument technically that nobody had done before and actually no one has done since.”

Randy Bachman founded the independent label Guitarchives in 1995 specifically to reissue some of Breau’s albums, such as Cabin Fever, Live at Bourbon Street, Chance Meeting, Boy Wonder, Mosaic and the video Master Class. Other albums have been released posthumously by Art of Life Records, including Swingin' on a Seven String (2005), At the Purple Onion (2004) and The Hallmark Sessions. Breau was the subject of a feature documentary, The Genius of Lenny Breau, produced by his daughter, Emily Hughes, in 1999.