The provincial floral emblem of Saskatchewan, the lily grows in abundance in meadows and clearings (artwork by Claire Tremblay). 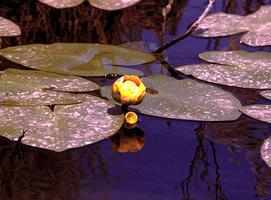 Lily, common name for members of genus Lilium of the lily family (Liliaceae). The family, comprising over 200 genera and perhaps 3000 species, includes plants as diverse as onion, daffodil and lily of the valley. Some authors divide it into subfamilies; others confer separate family status. Family members are mainly herbaceous; rootstocks form bulbs, tubers, rhizomes, etc. Genus Lilium comprises about 80 species native to northern temperate regions. Canada lily (L. canadense) and western red or prairie lily (L. philadelphicum) are native to Canada. Lilies are among the most popular ornamentals, and many decorative hybrids have been produced.

Since 1941, the western red lily has been the Provincial floral emblem of Saskatchewan. It grows in abundance in meadows and clearings; however, picking the flowers weakens the plant and causes its progressive disappearance. The tall (1.2-1.5 m) madonna lily (L. candidum), an introduced Asian species, has fragrant, trumpet-shaped, white flowers with yellow stamens. Although not indigenous to Québec and somewhat difficult to cultivate, it was chosen as Québec's floral emblem in 1963. It resembles the fleur-de-lis on armorial emblems and on Québec's flag; however, the fleur-de-lis is generally thought to be a stylized version of the flower found along the Lys River in France, probably Iris pseudacorus.

In 1999 the blue flag (I. versicolor) was adopted as the new floral emblem for Québec. This pretty, bluish violet flower, 8 cm in diameter, is native to Canada (Manitoba to south Labrador, Newfoundland and NS) and appears in late May or early June.