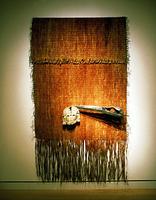 Liz Magor, artist (born 11 April 1948 in Winnipeg, MB). Since the 1970s, Liz Magor’s sculptures, installations and photography have established her as one of Canada’s leading contemporary artists. In 1984 she represented Canada at the Venice Biennale, in 2001 she was the recipient of the Governor General’s Award, in 2009 the Audain Prize and in 2014 the prestigious Gershon Iskowitz Prize from the Art Gallery of Ontario.

One of five children, Liz Magor spent her early life in Winnipeg, Manitoba, before moving with her family to Prince Rupert, British Columbia, in the early 1950s. An avid reader, Magor was drawn to the world of narrative and the imagination as well as to materials and the construction of objects. Combining these interests, she later began to fabricate whimsical sculptures and drawings.

In 1966, she enrolled in the Department of Fine Arts at the University of British Columbia. In 1968, she moved to New York City and attended the Parsons School of Design. Returning to Vancouver in 1970, Magor completed her formal training at the Vancouver School of Art (now the Emily Carr University of Art and Design) in 1971.

After graduating from the Vancouver School of Art, Magor remained on the West Coast and began what would be a decade-long investigation of the varied terrain of British Columbia’s Lower Mainland. Early works such as Bird Nest Kits (1975), Compost Figures (1978) and A Concise History (1979) juxtaposed natural and man-made objects in a whimsical exploration of notions of production and reproduction, the organic and inorganic. A well-known early example, The Birdnester (1970), presented pairs of naturally occurring flora and fauna in the sterile environment of the gallery. In later pieces of the period, such as Four Boys and a Girl (1979), Magor produced multiple identical objects that closely mimicked those found in nature. Along with other similar works, Four Boys and a Girl probed questions of production and marketing in the fabrication and display of sculptural objects.

The 1980s proved to be a momentous time in Magor’s career. After moving to Toronto in 1981, she was represented by the prominent Ydessa Gallery. During her time at the Gallery, Magor was chosen to exhibit at the Sydney Biennale (1982), the Venice Biennale (1984) and Documenta 8 (1987) in Germany. With her newfound success, Magor’s work shifted away from the natural world towards an investigation of the social and emotional life of objects and their capacity to hold and reflect personal and collective histories and identities.

In Dorothy, A Resemblance (1980–81), a piece that cemented Magor’s reputation as a rising star, a woman’s life story is told through everyday objects. Here, four steel tables supported individual collections of commonplace items, such as books, light bulbs, matches, fishing weights, bread and candles, all of which were cast in lead and stacked in groups of varying weights. The objects corresponded in density to the subject Dorothy’s body weight at different times in her life — a kind of literal measure of the passage of time. Dorothy was employed again in two subsequent pieces, The Most She Weighed/The Least She Weighed (1982) and I Have Always Weighed 98 Pounds (1983–84), both of which drew on aspects of the subject’s life, examining how weight might act as a stand-in for Dorothy’s body. It was at this time that Magor began to adopt photographs as part of her sculptural installations, furthering her earlier investigation of multiples in such pieces as Four Notable Bakers (1983).

Magor’s 1989 photographic series, Field Work — a collection of reprinted images she had captured in the 1960s depicting longhaired hippies in the back-to-the-land movement in moccasins and feathered headdress, cooking over campfires — came under sharp criticism for what was taken as a mocking display of Aboriginal culture. Put-off by such superficial critique, Magor left Toronto in 1993 and returned to the West Coast.

After numerous solo exhibitions around Canada in the mid-1990s, Magor returned to Toronto to install Messenger (1996) at the Sculpture Garden (the piece was later reinstalled at the Vancouver Art Gallery in 2002). In Messenger, Magor reconstructed an antique one-room log cabin and equipped it with a wood stove, cot, utility shelving, basic outdoor appliances and fuel. Like much of her later installations, the piece created a space between mimicry and reality — a tableau where real objects are placed out of context and juxtaposed with fabricated ones in order to create a kind of perceptual dissonance.

Magor continued her investigation of storytelling, probing notions of the real and the surreal in her pairings of realistic cast objects with actual foodstuffs in works such as One Bedroom Apartment (1996), Stores (2000), Chee-to (2000) and Double Cabinet (blue) (2000). Along with other pieces of a similar nature, Magor’s installations of this period earned her the York Wilson Endowment Award in 2000 and the prestigious Governor General’s Visual Arts Award in 2001. That same year she was one of 10 artists selected to participate in Elusive Paradise: The Millennium Prize, a competition and exhibition organized by the National Gallery of Canada.

In 2002 and 2003, the Vancouver Art Gallery and Toronto’s Power Plant produced mid-career survey exhibitions of Magor’s work. She was also included in the exhibition Baja to Vancouver: The West Coast and Contemporary Art, which toured numerous public galleries on the West Coast in 2003 and 2004.