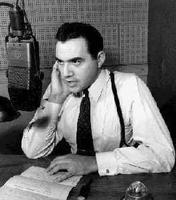 Lorne Hyman Greene, OC, actor, radio broadcaster (born 12 February 1915 in Ottawa, ON; died 11 September 1987 in Santa Monica, California). Lorne Greene was perhaps best known for his roles in the long-running NBC TV series Bonanza (1959–73) and the cult sci-fi series Battlestar Galactica (1978). Before his successful Hollywood career, he earned the nicknames “the voice of Canada” and “the voice of doom” for his work as CBC Radio’s national newscaster during the Second World War. He was made an Officer of the Order of Canada in 1969 and was posthumously awarded the Earle Grey Award for lifetime achievement at the 1987 Gemini Awards. He received a star on Hollywood’s Walk of Fame in 1985 and was posthumously inducted into Canada’s Walk of Fame in 2015.

While taking chemical engineering at Queen's University, Greene became involved in amateur theatre productions and worked at the campus radio station. Following graduation, he spent two years in New York studying drama at the prestigious Neighbourhood Playhouse School of the Theatre. In 1939, he moved to Toronto and became active in radio, eventually as chief news broadcaster for the CBC from 1939 to 1942.

His role as the country’s most prominent newscaster earned him the nicknames “the voice of Canada” and, given the dire news he often conveyed with his deep baritone, “the voice of doom.” During this period, he also narrated many documentaries for the nascent National Film Board (NFB), including Churchill’s Island (1941), a film about the defence of Great Britain that won the Academy Award for best short documentary. Greene also served during the Second World War as a flying officer in the Royal Canadian Air Force.

Following the war he returned to Toronto, where he continued to provide narration for the NFB and for private producers, such as Crawley Films. He also co-founded the Jupiter Theatre and established and taught at the Academy of Radio Arts, a school for radio production and performance personnel. Among his many students were James Doohan and Leslie Nielsen.

In 1953, like many of his talented contemporaries, Greene left Canada to pursue a career in the United States. He worked in New York, appearing in Broadway plays and on such television series as The Phillip Morris Playhouse (1953) and The Elgin Hour (1955), and made his Hollywood film debut opposite Paul Newman in The Silver Chalice (1954). After relocating to Los Angeles, he starred in episodes of television series such as Alfred Hitchcock Presents (1956) and Playhouse 90 (1957), landed a lead role in the series Sailor of Fortune (1955–58) and appeared in supporting roles in several Hollywood movies.

Beginning in 1959, he starred as Ben Cartwright on the NBC TV series Bonanza, a highly successful Western that ran for an astounding 14 seasons and made him a household name across North America. Thereafter, he continued to appear on television, most notably in the landmark mini-series Roots (1977) and the cult science-fiction series Battlestar Galactica (1978–79). He also appeared occasionally in movies, including a role as the legendary North-West Mounted Police officer Sam Steele in Klondike Fever (1980).

In the 1980s his energy was mainly directed at wildlife and environment preservation, notably through his award-winning documentary television series Lorne Greene's New Wilderness (1982–87), which drew high ratings on CTV and was widely syndicated in the US and internationally.

The drama department at Queen’s University established the annual Lorne Greene Award for outstanding achievement in the practical and performing aspects of theatre, and Canada Post issued a stamp in his honour in 2006 as part of its “Canadians in Hollywood” stamp series.