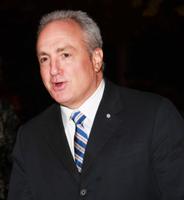 Lorne Michaels, né Lorne Michael Lipowitz, producer (b at Toronto 17 Nov 1944). Lorne Lipowitz earned a BA from the University of Toronto in 1966, and became involved with the underground film scene, running the New Cinema Club at Cinecity, an independent theatre. In 1967, he and David CRONENBERG, along with Robert Fothergill and Jim Plaxton, formed the Canadian Filmmakers Distribution Centre, Canada's first artist-run distribution company.

In 1964, Lorne Lipowitz began performing comedy onstage with his friend Hart Pomerantz. They eventually wrote and performed sketches for CBC Radio's The Russ Thompson Show. Lipowitz and Pomerantz were invited down to Los Angeles in 1968 to write for the short-lived The Beautiful Phyllis Diller Show, then were hired as writers on the groundbreaking Rowan and Martin's Laugh-In. Lipowitz returned to Toronto, having changed his last name to Michaels, and he and Pomerantz developed a comedy-sketch series for CBC-TV called The Hart and Lorne Terrific Hour (1970-71). When it came to an end, Michaels turned his attention back to the US and in 1975 became the original producer of Saturday Night Live (SNL), then a cutting-edge late-night show based in New York City. As the creator of the weekly show, he went on to become one of the most powerful and influential producers in American television history.

Michaels has won numerous Emmy Awards, many for SNL alone. In 1999, he was inducted into the American Television Academy Hall of Fame. In 2002, he was made a member of the ORDER OF CANADA and given a star on the Hollywood Walk of Fame. In 2003 he entered Canada's Walk of Fame and in 2004 he was awarded the Mark Twain Prize for American Humor by the John F. Kennedy Center for the Performing Arts; he is the first Canadian to earn this honour. Lorne Michaels has received the Golden Jubilee Medal and the GOVERNOR GENERAL'S AWARD for lifetime artistic achievement, and an honorary degree from Ryerson University for his contribution to the television industry.