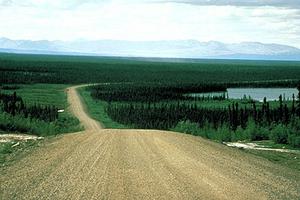 The highway runs north from Grimshaw, Alberta, to Wrigley, NWT, on the Mackenzie River (courtesy Government of the NWT). 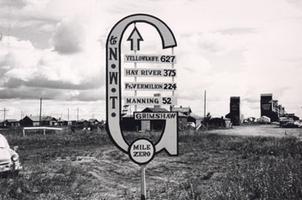 PreviousNext
The Mackenzie Highway, built between 1945 and 1948, originally ran from GRIMSHAW, Alta, through to HAY RIVER, NWT. The highway followed a winter road cut through the bush in the spring of 1939 to Hay River in order to supply the gold fields across Great Slave Lake at YELLOWKNIFE. The majority of the westward section around the southwestern end of Great Slave Lake to Wrigley on the Mackenzie River was built between 1972 and 1976 but was not completed until 1994.

Eighty km northwest of Enterprise, a ferry connects with the highway to Yellowknife, and connecting roads to the east serve Fort Resolution and Fort Smith. The section from Enterprise to Hay River is now a separate highway. First built as an all-weather road, some of its length has been paved. With a total length of about 1200 km, the Mackenzie Highway is the principal highway route into the NWT.