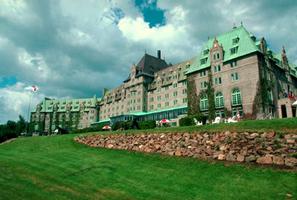 La Malbaie's renowned resorts are among the oldest on the continent and include Manoir Richelieu (Corel Professional Photos).

Few labour disputes have included such dramatic developments as the eventful Manoir Richelieu conflict, which shook Quebec in December 1985 when the Parti Québécois government sold the property, a renowned tourism heritage site, to businessman Raymond Malenfant for $555 555.55. The 350 employees of the Manoir were fully unionized, represented by the CONFEDERATION OF NATIONAL TRADE UNIONS (CNTU). The new owner maintained that he had purchased only a building and was not bound through the transaction by any obligation to the union or the existing collective bargaining agreement.

Over the course of the ensuing two-year conflict, a demonstrator died of suffocation at the hands of an officer of the Sûreté du Québec. It was also discovered that the CNTU had been infiltrated years previous by a Canadian Security Intelligence Service agent, who was in fact leading the dispute.

The dispute highlighted the shortcomings of existing labour legislation, which was further weakened three years later in December 1988 when the SUPREME COURT challenged Section 45 of the Quebec Labour Code in a ruling that reinforced the subjection of the Labour Code, a tool for protecting collective rights, to the Civil Code guaranteeing individual rights.

With the blessing of the highest court in Canada and two successive provincial governments (Parti Québécois and Liberal), and with open approval from a business community that fleetingly granted Raymond Malenfant star status, the 350 workers lost their jobs and union.