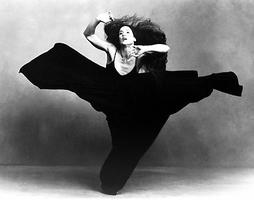 Margie Gillis, dancer, choreographer (b at Montréal, 9 Jul 1953). Since bursting on the scene in 1975 with her first solo performance in Vancouver, Margie Gillis has been compared to Isadora Duncan for her weighty, cathartic dances that stem from her deep response to music and her political and social activism. An acclaimed international soloist, she took ballet and gymnastic lessons as a young child. Later she began to forge her own direction, studying with such teachers as May O'Donnell, Linda Rabin, Lynda Raino and Allan Wayne.

Although primarily a soloist, Margie Gillis has danced with companies such as Montréal's Shango in 1975, as well as in New York's Garden of Earthly Delights by Martha Clarke in 1984 and Clarke's Vers la flamme in 1999. As guest artist, she also toured with LES GRANDS BALLETS CANADIENS in Dracula in 1985. She performed with the NATIONAL BALLET OF CANADA in 1999. Gillis made several appearances with the Paul Taylor Dance Company, in which her brother and occasional partner, the late Christopher Gillis, was a leading dancer. From time to time throughout her career she has invited close friends to choreograph and perform with her, often returning the favour. These performances have been many and memorable; for example, in 1999 she joined a group headed by opera star Jessye Norman for concerts dedicated to jazz artist Duke Ellington.

Gillis's simple, direct choreographic and dancing style is characterized by great swoops of emotion, which in her early dances she translated physically into dolphin dives and flips. Later works have been much more subdued, sometimes even sombre. Gillis's hip-length chestnut hair and voluminous costumes are her trademarks. Mercy, premiered at the 1977 Dance in Canada conference in Winnipeg, became one of the most important moments in Canadian dance history for its raw physicality and hair and skirt dancing.

Besides performing works created for her by others, Margie Gillis has choreographed at least 100 cathartic pieces for herself. The largest, M.Body.7, for 7 women aged 13 to 72, included Canadian ballerina Anik BISSONNETTE and contemporary dancer Laurence Lemieux as well as New Yorker Risa Steinberg, and marked Gillis's 35th year onstage in 2009. The following year she premiered Thread/Filatures in Montréal and created another new piece in New York City.

Alongside performing, Gillis has maintained an international career teaching her method of dancing "from the inside out," as she calls her emotional journey to stage.

A frequent spokesperson for fundraising benefits - particularly for AIDS sufferers - Gillis was a regular guest at the Gala des Étoiles. She performed with the Québec and Montréal symphony orchestras and gave biennial week-long seasons in New York for many years. She has choreographed several solos for the CIRQUE DU SOLEIL and regularly mentored students at the international Springboard career-launch workshop held annually in Montréal. She is the subject of several television films, including Body Emotions (1981), L'Univers de Margie Gillis (1985), The Gillis Mystique (part of the Eye on Dance series) (1990), Wild Hearts in Strange Times (1996) and Margie Gillis: Inside Out (1998). In 2007 Gillis toured a stone's poem throughout Western Canada, to public and critical acclaim.

Margie Gillis was invested as a member of the ORDER OF CANADA in 1988 and received the Walter Carsen Prize for career achievement in the performing arts in 2008. That year, New York's Stella Adler Studio gave her their first MAD Spirit Award for exceptional humanitarian actions by an artist, and in 2009 Gillis was made a chevalier of the NATIONAL ORDER OF QUEBEC. In 2011 Margie Gillis won a GOVERNOR GENERAL'S AWARD FOR THE PERFORMING ARTS.