Martha Louise Black, naturalist, politician (born 24 February 1866 in Chicago, Illinois, USA; died 1 November 1957 in Whitehorse, Yukon). Martha Black joined the Klondike Gold Rush in 1898, hiking over the Chilkoot Pass. She became a Fellow of the Royal Geographical Society for her research and lectures on Yukon flora. From 1935 to 1940, Black represented the Yukon in Parliament. She was the second woman elected to the Canadian House of Commons.

Martha Louise Black, naturalist, politician (born 24 February 1866 in Chicago, Illinois, USA; died 1 November 1957 in Whitehorse, Yukon). Martha Black joined the Klondike Gold Rush in 1898, hiking over the Chilkoot Pass. She became a Fellow of the Royal Geographical Society for her research and lectures on Yukon flora. From 1935 to 1940, Black represented the Yukon in Parliament. She was the second woman elected to the Canadian House of Commons. 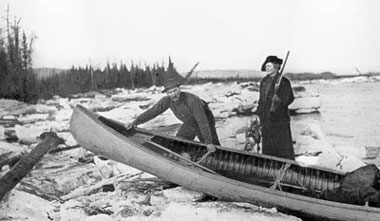 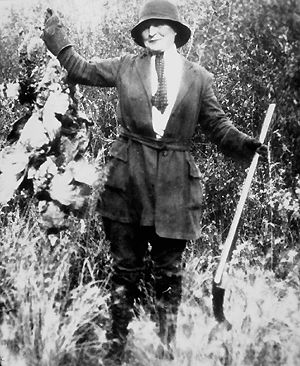 At 70, she campaigned the vast Yukon constituency - often on foot - to become the second woman ever elected to the Canadian Parliament (courtesy Yukon Archives).
PreviousNext

Martha Munger was born in Chicago, the eldest of three surviving children of George Munger and Susan Owens. The Munger family had lived in the United States since 1645, and Martha’s ancestors fought in the American Revolutionary War, War of 1812 and American Civil War. George Munger owned a successful national chain of steam-powered laundries, and the Mungers were part of Chicago’s business elite. Martha was educated at St. Mary’s of Notre Dame, where she came first in her class, excelling in elocution and botany.

In 1887, Martha married William Purdy, the son of the president of the Chicago, Rock Island and Pacific Railway. They had three sons, Warren (1889–1937), Donald (1895–1976) and Lyman (1899–1937). After her marriage, Martha Purdy wrote poems, taught at one of Chicago’s first kindergartens and helped organize the 1893 Chicago World’s Fair. After ten years of marriage, however, Martha later wrote that “Will was away from home most of the time, and I was unhappy.”

In 1898, Martha Purdy traveled to the Yukon with her younger brother George Munger Jr. and cousin Harry Peachy in an expedition financed by her father. She intended to lay claim to gold that had been promised to her by an acquaintance, William Lambert. (See Klondike Gold Rush.)

The party travelled by steamer from Seattle, Washington, to Skagway, Alaska. Then they hiked to Lake Bennett on the Chilkoot Pass trail, hiring porters to carry the required year’s worth of supplies for entry into the Yukon. Martha later wrote about the journey, “I cursed…my tight heavily boned corsets, my long corduroy skirt, my full bloomers, which I had to hitch up with every step.” During the journey, she realized that she was pregnant with her third child.

The party arrived in Dawson City on 5 August 1898. However, Martha soon discovered that there was no record of the gold she’d been promised. It was “either a huge hoax or an unfathomable mystery,” she later recalled. Martha learned to make sourdough bread and cooked for miners while her brother and cousin prospected for gold.

Her youngest son, Lyman, was born in January 1899. “What a welcome the camp gave my baby!” Martha later wrote. “The men of our party, and my neighbours, all men, took full charge. They kept the fires going. They brought in foodstuffs… Our cabin became a social centre.” Martha traveled back to the United States with Lyman in 1899 but returned to the Yukon in 1900. She was followed by her parents and all three sons in 1901, where they established a sawmill and gold crushing plant in Dawson City.

Martha and William Purdy, who was by then living in Hawaii, began divorce proceedings in 1903. In June 1904, the divorce was final. On 1 August 1904, Martha married George Black, a lawyer from New Brunswick working in Dawson City. In her memoirs, she wrote, “He was good-looking and clever. As we talked, I learned he was interested in politics, and had a sincere desire to serve the Yukon.” The newlywed Martha adopted George’s political and religious views completely, later writing, “Immediately after my marriage, without compunction, I became an Anglican, an Imperialist and a Conservative.”

The Blacks shared a love of the outdoors and cowrote a book, Yukon Wild Flowers, with text by Martha and photographs by George. Martha wrote in the book, “Together we have tramped the Yukon trails and paddled the Yukon streams.” Martha Black collected and mounted 464 varieties of Yukon wildflowers and other plants. The Canadian Pacific Railway commissioned her to develop wildflower collections as tourist attractions at its hotels. Her collections were also displayed at the Smithsonian Institute and the British Empire Exhibition of 1924.

In 1912, George Black was appointed territorial commissioner for the Yukon. Martha Black redecorated Government House and oversaw receptions that included not only the territorial elite but “all who wished to come, irrespective of social position.” Guests included miners and dance hall entertainers from the Klondike Gold Rush.

In 1916, George Black resigned as territorial commissioner to organize the Yukon Infantry Company of the Canadian Expeditionary Force during the First World War. In a 1916 Dominion Day speech in Dawson City’s Minto Park, Martha Black stated, “The Great War is a woman’s war as well as a man’s war. When peace comes the articles of peace will affect the women quite as vitally as they will affect the men.” Black accompanied her husband and son Lyman to the United Kingdom, where she visited sick and wounded Yukon servicemen and volunteered with the Canadian Red Cross.

While in Britain, she also gave over 200 lectures on Yukon landscapes. She was elected a fellow of the Royal Geographical Society in 1917.

In 1921, George Black was elected to the House of Commons as a Conservative Member of Parliament representing the Yukon. The Blacks began spending winters in Ottawa and summers in Dawson City. In 1930, George Black became Speaker of the House of Commons. Five years later, he suffered a nervous breakdown, and Prime Minister R.B. Bennett asked Martha Black to run for Parliament in his place.

In her memoirs, Martha Black described her 1935 federal election campaign:

My campaign was different from any other in Canada. There were only 1,805 registered voters in a territory of over 200,000 square miles… There were no radio broadcasting stations… To reach voters I had to travel by plane, row and motor boat, steamer, two-horse team and the old reliable ‘shank’s mare.’


Black was elected as an Independent Conservative Member of Parliament by 134 votes. She became a member of the Official Opposition during the Liberal government of Prime Minister William Lyon Mackenzie King. During her time in Parliament, Black was a tireless advocate for the Yukon and supported the building of the Alaska Highway. Her memoirs, My Seventy Years, were published in 1937. (They were later reissued as My Ninety Years and then Martha Black after her death).

By 1940, George Black had recovered his health and resumed his political career. Martha stepped down to allow him to regain his previous seat in Parliament. After leaving the House of Commons, Martha Black continued to deliver public lectures for the next decade. In 1949, she received the Order of the British Empire “for service in the development of social and cultural life, especially in the Yukon Territory.” George Black retired from politics in 1949, and the couple returned to the Yukon, moving to Whitehorse in 1953 when the territorial capital moved from Dawson City. Martha Black was 91 when she died in 1957. Yukon territorial commissioner Fred Collins paid tribute to her in a speech to the Yukon Council, stating, “Distinguished in the fields of art, letters, science and politics, and a figure of national importance…her life and career stand as an inspiration to all citizens of our nation.”