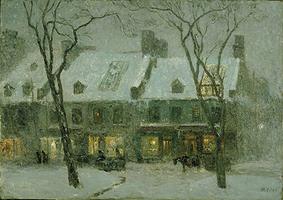 Maurice Cullen, circa 1908, oil on canvas. Many of his scenes, such as this, were at night or dusk (courtesy Montréal Museum of Fine Art). 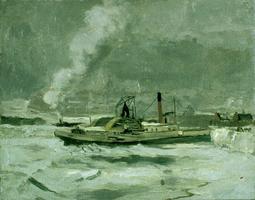 Maurice Cullen, 1897, oil on canvas. Cullen was one of the first Canadian artists to supply the principles of French impressionism to Canadian landscape (courtesy NGC/6295).
PreviousNext

Maurice Galbraith Cullen, painter (b at St John's 6 June 1866; d at Chambly, Qué 28 Mar 1934). Cullen moved to Montréal with his family in 1870. There he began his art training as a sculptor at the Conseil des arts et manufactures and with sculptor Louis-Philippe HÉBERT. Like other artists of his generation, he went to Paris for additional training. He arrived there in 1889 and decided to become a painter; he attended the École des beaux-arts, studying, like Paul PEEL, with Jean-Léon Gérôme, then with Élie Delaunay.

By 1895, when Cullen returned to Montréal, he had darkened the tonality of the impressionist style learned abroad. In time he became the true interpreter of Montréal's cityscape, particularly of night or dusk scenes, invariably with shimmering lights. He was also one of Canada's great painters of snow. Like his colleague and friend James Wilson MORRICE, Cullen was a major figure in Canadian art. His gift was that of a romantic - an ability to capture light and mood. Some of his work was influenced by William Blair Bruce, whom Cullen often visited in Gréz 1892-94. Cullen in turn influenced many by teaching for years at the Art Association of Montreal. He showed in the first exhibition of the Canadian Art Club, an advanced group of the period, and was made a member in 1910.