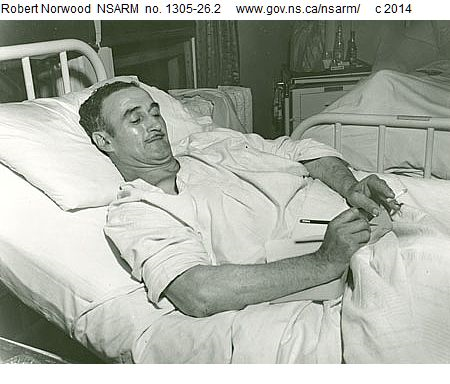 Maurice Ruddick was born to a coal mining family in Joggins, Nova Scotia. He became an amateur boxer in his teens and, after finishing the 11th grade, commenced work in the coal mines of nearby Springhill. The descendants of enslaved persons who were brought to Nova Scotia by Loyalists in the late-18th century, Ruddick and his wife Norma were among a handful of people who formed the Black community of Springhill, where they raised a family of twelve children.

Known as an energetic and musically-inclined personality, Ruddick wore a well-groomed moustache and pomade in his hair, occasionally sporting pastel shirts and a felt fedora. In the words of Melissa Fay Greene, author of Last Man Out (2003), he brought “a dash of the Hollywood look” to the drab industrial town of 7,000 people. Occasionally he and his older children performed in local venues under the billing The Singing Miner and the Minerettes. While in the collieries (coal mines) Ruddick often orchestrated musical breaks among his colleagues, leading them in such popular songs as “Don't Be Cruel” or “Bye Bye Love.”

The No. 2 colliery where Ruddick worked was owned by the Dominion Steel and Coal Corporation. Over 4 km deep, the mine was one of the deepest in North America. An explosion there in 1891 had killed 125 men and boys, while another in 1956 killed 39. When a journalist later asked Ruddick why he chose to do such dangerous work, he replied, “One thing you must understand, there were good times in the mines — a lot of singing in the break periods, a comradeship.” (See also Disasters.)

On the morning of 23 October 1958, Ruddick was among 174 men in the No. 2 colliery when a bump — a buckling of the mine’s walls and ceilings — caused the shaft to collapse. Seventy-five men died in the disaster. The remainder were trapped underground. Several of the survivors were rescued within a day or two, but Ruddick and six other men were trapped near the bottom of the mine. In an effort to sustain his team’s morale in the darkness and stifling heat of the shaft, and despite the pain of his broken leg, Ruddick led his fellow workers in a few tunes. “I got along pretty good at first, but later the singing got harder,” he said. “My voice cracked because I was so dry.” While a group of 12 men was trapped in a separate chamber for a full week, it was nine days before Ruddick’s group was finally rescued. Ruddick later described the experience in the song "Spring Hill Disaster”.

Citizen of the Year

The rescue became a media sensation. One of the survivors was invited onto The Ed Sullivan Show, while Ruddick also became a brief celebrity. After he was quoted as saying, “Give me a glass of water and I’ll sing you a song,” upon his rescue, he garnered profiles under headlines such as “Cheerful After Ordeal” and “Hero Keeps Comrades’ Spirits Up.” The story caught the attention of Georgia Governor Marvin Griffin, who invited the surviving men and their wives to a resort on Jekyll Island. But upon learning that Ruddick was Black, Griffin insisted that Ruddick be segregated from the group, stay in a trailer outside the resort and rest at a separate beach. When his colleagues refused to go without him, Ruddick and his wife Norma chose to accept the governor’s half-hearted invitation. “This might be a chance to open some people’s eyes,” said Ruddick.

In February 1959, the Toronto Telegram polled its readers on their choice for Canada’s 1958 Citizen of the Year. Of the 21 nominees, Ruddick won 51 per cent of the vote. Maurice Ruddick died in 1988, all but forgotten for his role during the Springhill mining tragedy. He had spent the last decades of his life in obscurity, tooling away at home and raising a family.