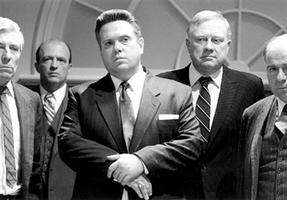 Maury Chaykin, actor (b at New York, NY 27 July 1949, d at Toronto 27 July 2010). Maury Chaykin was born in Brooklyn, his father an American, his mother a Canadian, and throughout his life he maintained a dual citizenship. He studied acting at the State University of New York in Buffalo and became one of Canada's most respected and versatile character actors.

He founded the avant-garde Swamp Fox Theater Group in Buffalo and in 1970 the troupe appeared uninvited at the Festival of Underground Theatre in Toronto, making a strong impression on the festival's artistic director, Ken Gass. In 1974, when Chaykin was a struggling young actor working off-Broadway, Gass invited him to Toronto to help create Hurray for Johnny Canuck, his stage adaptation of the wartime comic book. Chaykin's performance in the play led to job offers from both sides of the border, and he was invited to perform in the New York Shakespeare Festival's Public Theater production of Leave It to Beaver Is Dead with Mandy Patinkin and Dianne Wiest.

Maury Chaykin blazed a trail across stage, screen and television as a masterful portrayer of eccentric characters full of inner turmoil. He showed considerable range in his performances, moving from the dangerous American labour boss imported to crush the Canadian Seafarers Union in Donald BRITTAIN'sCanada's Sweetheart: The Saga of Hal C. Banks (1985), which earned him a GEMINI Award nomination for best performance by an actor in a dramatic program, to the glazed-eyed cavalry officer who commits suicide near the beginning of Kevin Costner's Oscar-winning Dances with Wolves (1990), to the sex-obsessed games player in Atom EGOYAN'sThe Adjuster (1991), perhaps his finest role, and the spaced-out rock star composing a symphony for whales in Whale Music (1994), a performance which won Chaykin a GENIE Award for best actor.

Maury Chaykin brought an unnerving edge to whatever character he played, and found his niche in Hollywood movies while still doing his best and most demanding work in Canada.